Australia is to join the EU carbon trading platform, it has been announced.

The country has already established plans for its own domestic system which will now be fully integrated into the Europe-wide emissions market by 2018.

In order to join the EU system, the country has removed the guaranteed minimum – or floor price – for a tonne of CO2, a policy that had been unpopular with industry.

Carbon trading systems assign allowances to various high-emitting sectors, which can then be traded. Assigning a value to a tonne of CO2 emissions creates an incentive to reduce them. 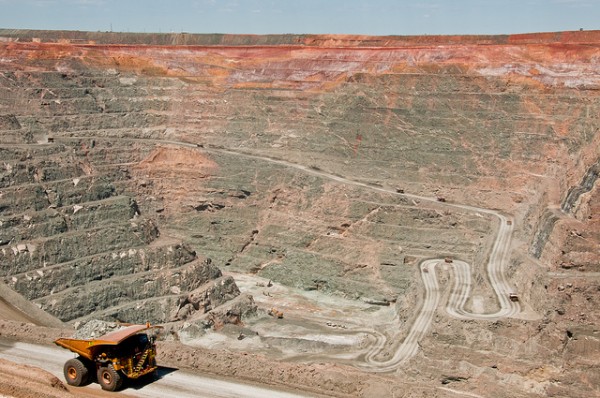 The Australian mining industry was one of the hardest hit by the country's now defunct carbon floor price. (Source: Flickr/GOC53)

The announcement of the linkage has been broadly welcomed by analysts and NGOs and could signal the very first signs of how future global carbon trading could look.

“We knew they were talking to each other but we didn’t expect the news this soon,” said Rob Elsworth, policy officer with Sandbag, an NGO that campaigns for effective emissions trading. “We want a global carbon price and we welcome this linkage if it helps to drive more countries towards that.

Australia had been expected to form the hub around which Asia-Pacific schemes such as those of South Korea, New Zealand and emerging regional plans in China, would aggregate around. The shift towards the EU system could mark it out as the basis for a larger, global platform in the future.

“It’s a very positive step and other countries, particularly South Korea, which is actively building its own system, will be watching with interest,” said Elsworth.

“The natural thing to do would be to join the other leaders but only time will tell so we mustn’t jump to any conclusions. Now we need to see a comparable level of ambition between members,” he added.

The news could also have wider implications for the international climate change negotiations.

“The idea of lots of smaller trading systems linking rather than the development of one global platform that everyone participates in, like that which underpinned the Kyoto Protocol’s first commitment period one, could set the tone and give us an idea of what the Durban Platform could offer,” said Dr Steven Knell, Associate Director, European Power Advisory Service IHS CERA.

The international scheme has been dogged by low prices and question marks over the sustainability of some of the carbon offsets used to “cancel out” emissions from industry.

“The UN talks have always been top down but this is an example of where a bottom up progress has legs,” he added. “There could be other countries, such as South Korea joining in 2018 or 2020 but it all remains to be seen.”

The Durban Platform seeks to acquire pledges for emission cuts from all countries rich and poor and would likely be underpinned by a carbon trading platform of some description.

Despite welcoming the move, Knell did warn that there were still questions to be answered over differences in pricing and the scope of the sources of emissions that the EU and Australian systems include.

The EU carbon market is also suffering from an oversupply of emission allowances as a result of the recession and successful environmental policies cutting the CO2 emissions in some industrial sectors.

The oversupply has sent the price of carbon tumbling, weakening the incentive to cut emissions for those included in the scheme.

“This isn’t going to fix the supply problem in the EU system. It is another potential source of incremental demand that can counteract the surplus that has developed. But it’s not a transformative change price-wise. Put it this way though, if the aviation issue is not resolved this doesn’t matter, it would be completely outweighed by what we expect that sector to generate,” said Knell.

Non-EU countries’ airlines are included in scheme if they land or take off in an EU airport. Many including China, Russia and the US are opposed to this inclusion.

The price of climate change: What can the carbon economy do to cut emissions?

Comment: EU must be more strategic and open to cooperation in dealings with China on climate change