One of the UK’s leading low carbon entrepreneurs says the sector is in turmoil because of a lack of policy certainty from central government.

Ecotricity owner Dale Vince says the continued economic crisis combined with changes to incentives for solar and wind power has left green energy companies in the UK demoralised and frustrated.

“I have no hope or confidence in this government at all on green issues,” he told RTCC.

“Things are being lobbed at us by the government: overnight slashes in the solar FiT (Feed in tariffs), big and then small solar; a cut in the wind ROC (Renewables Obligation Certificate) – you don’t know what’s coming next with these people.

“There must have been ten consultations in the past twelve months in the energy market that we’ve been taking part in. It’s exhausting.” 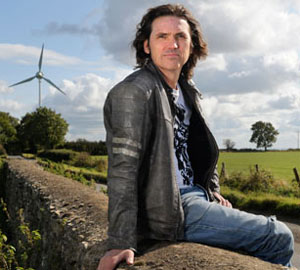 Vince set up Ecotricity in 1996 - it now has over 65,000 customers, generating energy from the wind and sun

Chancellor George Osborne’s move in July to make the UK more attractive to oil and gas companies by offering £500m tax breaks left many in the renewables sector despairing – especially after they had been told money to incentivise wind and solar projects was drying up.

Vince was one of many energy leaders who signed a letter from the Renewable Energy Association to Prime Minister David Cameron and Deputy Prime Minister Nick Clegg on August 9 calling for an end to ‘constant reviews and policy uncertainty’.

And he says that on the back of the current economic crisis, it is becoming an increasingly difficult environment in which to operate.

“You’ve got the credit crunch – it’s still with us, it’s never been harder to borrow money to build a wind farm,” he said.

“It was easier back in the original days of the credit crunch, back in 2008. What was it, £200 billion of quantitative easing that’s gone on so far? It’s not making its way to the front line.

“We’ve almost ground to a halt in terms of being able to build because there’s just no money out there.”

To get round the lack of liquidity in the market, Ecotricity launched two rounds of ‘Ecobonds‘ in order to generate capital, one in 2010 and one in 2011, with another planned this year.

Between them they have raised nearly £20 million – paying for 18 wind turbines and a ‘sun park’ outside Cardiff.

And while Vince says he’s happy with the investment they generated – the second was twice oversubscribed – he argues that public interest in green energy will only be sparked when fuel bills go through the roof.

“What we require – and it’s coming – are hideous costs of energy, which will at some point make green energy cheaper than the alternatives, and then it will just become a huge thing.