US CO2 emissions from the energy sector have fallen to levels more common in 1995, with new domestic gas resources taking the credit.

The US gas boom has provided ample domestic shale gas resources to displace dirtier coal-fired power. Meanwhile, Germany is undergoing a different energy switch as it replaces nuclear power with fossil fuels. Unsurprisingly, its emissions are on the rise.

Swapping oil and coal plants for gas is the basis of many developed countries energy roadmaps, but beyond the headline statistics, gas is not necessarily the win-win solution that it looks like on paper.

Critics say gas is not the right solution to a fossil fuel addiction and fear investment in gas pushes back the timetable to complete rehabilitation for several reasons. 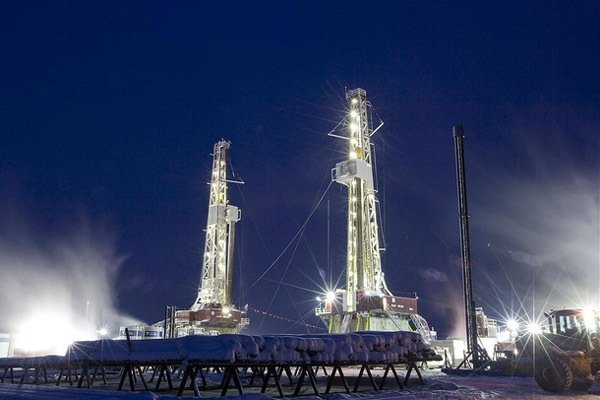 Shale gas rigs in British Columbia, Canada. North America is in the midst of a gas boom. (Source: Flickr/Nexen)

Gas powered generation will be required for those windless, cloudy days when renewable energy grinds to a halt.

But there is a danger that by relying too heavily on gas investment is diverted away from renewables. Renewable energy means low carbon energy independent of the international energy market and the creation of jobs.

Investment in renewable technologies in the US is criticised by those both for and against. Critics are still unhappy about the collapse of government backed companies with the Solyndra hangover seemingly impossible to shake-off.

Proponents point to the uncertainty over the future of the Production Tax Credit, the main subsidy for the industry, which with just four months left to run, is still awaiting a decision on its possible extension.

The US has long exploited wind in its rural interior and is pursuing solar aggressively (it currently enjoys a trade surplus with China in the solar sector). But has been slow to develop an offshore wind sector leaving it lagging behind Europe.

New gas-fired power plants, storage facilities, pipelines and other transport infrastructure costs money. Once built, they last the best part of 40 years, locking countries into that technology and the associated emissions.

If energy efficiency improves, economies decarbonise and renewables develop, you willnd up with more fossil fuel plants than necessary.

Italy is in the ridiculous situation of subsidising oil power plants that only operate a few days a year all year round. They were built as a buffer against fluctuating gas prices. One recession and a renewables boom later, the state utility has had to go cap in hand to the government while at the same time cutting support for a blossoming clean energy industry.

Prices play a big part in the gas debate too. Supply is dominated globally by a handful of big suppliers. The international gas market is fairly volatile. Disputes over pipelines, shipping or external political matters all play a part. The immediate on/off nature of its supply has already seen it used as a political tool.

Wholesale prices directly impact consumers and even the US with its vast domestic resources is not immune to fickle international price pressures.

The recent stats show that emissions-wise gas is better than coal, so yes, in the short term, cranking up the output from existing gas plants makes sense. But while statistics never lie, they rarely tell the whole truth. 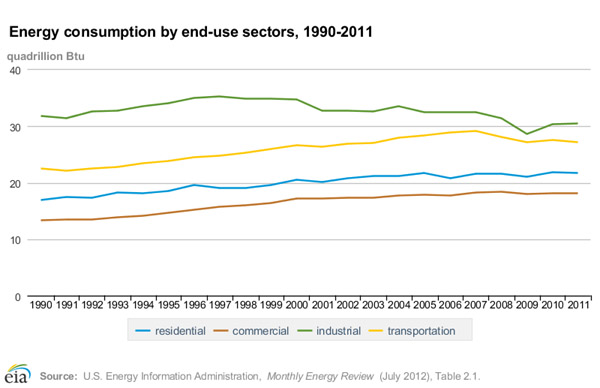 The most recent data in the US also shows quite clearly that while CO2 from energy use is down overall, there is still a worrying energy consumption pattern.

Transport, residential and commercial consumption in the US all rose between 1990 and 2007 and have flat-lined more or less since the recession. Air conditioning use from a brutally hot summer will likely push 2012’s consumption up a little higher.

Only the industrial sector has fallen steadily in the past 20 years.

The reduction from swapping gas for coal masks this pattern and dilutes the appetite for energy efficiency.

All of this is before you consider the environmental impact of new unconventional gas sources, the scale of which remains up for debate.

What ever happened to 2°C?

The effect of sustained gas use on climate change has been assessed by the IEA in its report of a best case scenario for the future us of gas resources.

“On its own, a higher gas model, with our golden rules scenario, emissions are cut by 1.3% but we’re still looking at a rise in CO2 levels of 650ppm which is about 3.5°C,” said Maria van der Hoeven, executive director of the IEA.

The IPCC has recommended that warming should not exceed 2°C, advice that world leaders signed up to at the Copenhagen climate change summit – although lead US climate negotiator Todd Stern has recently questioned this policy.

The choice for politicians now is the relief of a quick victory via gas, or the realisation that on any other time scale and by any other measure, the appeal of gas is highly inflated.

Is CCS the answer?

Carbon Capture and Storage (CCS) technology plays a key role in the EU’s 2050 Energy Roadmap. CCS involves trapping the CO2 after combustion and diverting it to long-term stores in rock formations.

“Gas will be important too but it is bound up with our CO2 targets. It can only fit with our scenarios if it is fitted with CCS,” Gunther Oettinger, EU energy Commissioner said last December.

Europe is still in the funding stage for demonstration plants of the technology with commercial applications even further away, certainly too late to make any significant contribution to Europe’s target to cut emissions 20% by 2020.

Question marks also remain over the total cost of CCS projects with the oil companies recently stating they won’t press ahead without public money.

In the short-term, it makes sense to use the gas plants we have. Seeking to expand the use of gas based on best guesses of future gas prices and overly-optimistic (but hugely convenient) outlook on the future of CCS is a folly.

In the US, the lure of its domestic resources proved too great. In Europe, spectacular estimates of its own shale gas resources have been written off by some as a ploy to help in negotiations with Russia over gas prices.

The US situation is not analogous to gas-light Europe, but if either wants to get clean, renewable energy must not be pushed off the agenda by the siren call of cheap, plentiful and secure supplies of CCS-neutered gas.

Gas and climate change: Can we drill our way out of four degrees?