Forest Green Rovers are a small football club near Bristol who play in the fifth tier of the English league system.

In 2010 Rovers were bought by Ecotricity owner Dale Vince – since then he has overseen a radical overhaul of the way the club is run.

Key to his philosophy is that football – like his business – can be run in a sustainable and energy efficient way.

Such is his success that he was approached by former England and Manchester United footballer Gary Neville, and together they set up the Sustainability in Sport initiative.

I visited Vince at Ecotricity’s headquarters in Stroud. Next week you can read about his thoughts on the UK government’s climate and energy policy, and his advice for entrepreneurs keen to enter this competitive market.

But to mark the start of the English football season, we start with the beautiful game, and his dream to make Forest Green Rovers the world’s first zero carbon club (and see them play in the Premier League).

TY: When did the idea of taking over Forest Green first come about?
Long story short, they were on the verge of bankruptcy, they were like five daya away from it. They needed, they said, a relatively small sum of money just to pay the wages in that month and then everything would be okay. It wasn’t. But that’s a different story. So here we are, two years later now, in full control for about a year.

The reasons for doing it? Well first was that it needed saving. It’s a football club with an 100-year heritage, a big part of the local community, I think there were almost 100 jobs on the line – half of them were part time. Partly it was because it needed it, partly it was because we could, we felt that we could afford it – we still can afford it but it’s cost more than we’d hoped, and were told, but I think that’s football!

And the third reason was we saw the opportunity to take our work in a new world, the world of football, it’s as simple as that. We’re focused on energy, transport and food, as you probably know, as the three big issues, and all of those issues are throughout football.

We thought we could make this an eco-football club, use that as a platform to talk to a new audience – relatively untouched, I think, by the eco-message, the world of football. That began a relationship with Gary Neville in early 2011. We wind-powered his testimonial match with Juventus. Forest Green played penalty shoot-outs against Man United at Old Trafford, live, it was incredible. Then he asked me to join him in a foundation, ‘Sustainability in Sport’, to take this message to the wider world. The point I was trying to make was, let’s take our work into the world of football, sport is huge undertaking.

Forest Green has become our kind of ‘test-bed’, which will evolve into a role model as we perfect what we’re doing, which we’ll use with Sustainability in Sport to show what we can do. Things like developing a standard for organic football pitches. We changed the menu, we took red meat off the menu – huge fuss, huge. We’re doing loads of stuff. It’s great fun, actually. It’s been a real diversion from the day job, a real challenge, to take this organisational mess that Forest Green was and turn it into one that works. Also to learn about a new world.

I mean, I play football and I’ve watched England but I’ve never followed a club. Actually the depth of understanding that I’ve gained from talking to the manager has been great. Personally I’m a fan of fitness and nutrition as well and I’ve been able to take some of those learnings into the conversational mix.

What we’ve done is try to improve everything across the board: the nutrition, the training, the equipment, the menus for the staff and the fans as well as the players, the organic pitch, solar panels, the wild flower border. If you go up there now it’s fantastic.

The place looks really quite beautiful. Man United came to play us on Saturday, I don’t know if you know that. Man United played Forest Green, I mean come on! 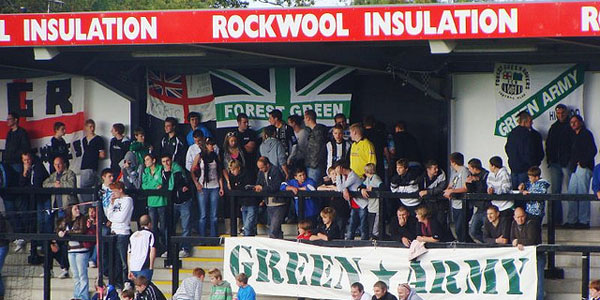 Beef burgers have been replaced by Veggie burgers (£3) or Badger Pasties at £3.50 ©nicksarebi

TY: How have the fans taken to it?
Really well. I have to say, really well. If you read our fans’ forums in the last few months, these guys are actually starting conversations with each other about renewable energy, and about sustainability. Every now and then somebody says, ‘I bet Dale’s really happy we’re having these conversations’.

Part of our aim is to get people thinking and talking and a couple of fans have come up to me and said, you’ve changed my life, I’ve gone vegetarian, that has changed my life, I’ve got more energy, I feed my children better, stuff like that. That’s so rewarding, to hear that from people. And if one person says that, then other people are watching and maybe it will have an impact on their lives too. We have e-mails from all over the world from people, usually veggies or vegans, saying ‘I love what you’re doing’.

Our fans are now saying, you can see it on the forums, they say it to me and they say it to each other, they think the food is great, it’s better than it was. What we were trying to say was, don’t focus on what’s not in the food, focus on what is in the food, because actually we’re going to bring you food you’ve never eaten before, types of food you’ve not tried before.

Our argument is, once every two weeks there’s a game for two hours, don’t come in and eat roast beef and what you eat at home, come here and eat something different, it’ll be better for you. We’ve finally gotten through with that message because the food is great and everybody loves it. Even the hardcore meat eaters have said, actually, I like that food.

TY: Season’s starting soon – is it quite tense?
Saturday. It’s going to be our third season. Our second season in full control. We took red meat off the menu in the first menu, we’re 2.5 years in now. We’ll go further. We started with red meat then we took white meat off the menu as well, so there’s no chicken or stuff like that. Our players are loving it, they love Quorn. Who can’t love Quorn? Unless you don’t like fungus. It’s got egg in it as well, which is a bit unfortunate. But ultimately I think we’ll be vegan. You know, we’ll get there. One step at a time.

TY: Will we see the team cycling or taking the train to matches?
A coach is a pretty economic way to move 30 people. The ultimate goal on that front is to get an electric team bus. I think before we get there we’ll get the manager an electric car, that’s our plan in the next twelve months, with electric charging facilities at the club so the fans can come down, watch a game, get home. That’s an extension of our Electric Highway work. An electric minibus will come before the full scale bus, just because it’s a practical step.

TY: The image of a footballer in a Range Rover is ubiquitous. Do you think FGR stands a chance of changing that culture?
Yeah, I do. Gary Neville’s a great example of that. When he tells his story of how he got into this, it’s because he realised one day, you know, he had this huge mansion, gas-guzzling car, and he thought ‘god, this is unsustainable, let’s change it’. He was ridiculed for turning up to work in a Prius and stuff like that, ‘where’s your Ferrari gone?’. But things can change, absolutely. Our players aren’t paid enough to have Ferraris.

TY: Will he/FGR players have an influence on the England squad?
We’ve had, I think, three of our players called up for England U21s this season and so that’s already happening.
Gary’s absolutely passionate about this and he wants to take this message to the whole world of sport, so there’s no doubt he’ll be having these conversations with the FA. He’s got access at that kind of level. It’s a great opportunity. Beyond my dreams.

It comes back to the question of why do it [FGR takeover], they needed it, we could, and it’s a chance to get the eco-message into it. This was a local football club and now we’ve got Gary Neville, Man United at Old Trafford, Man United coming here to play us – suddenly we’re on this whole new adventure, taking the eco-message into the world of sport. It’s huge.

TY: How exciting was it to see Ecotricity’s logo on a shirt for the first time?
It was brilliant. It has only been this season. Last season it was somebody else but they dropped out. We picked it up. We tried to stand back from overwhelming it brand-wise, but it had no shirt sponsor so we picked it up. It’s fabulous. You can see it behind you on the wall. We’ve managed to get it almost in our green. It looks fantastic. One of the things I really enjoy doing is, you could call it branding I suppose.

What we’ve done at Forest Green is we’ve created a new website, we’ve created a new look for the players, a new identity for the club. Not completely new, we haven’t broken with tradition – our away kit is a white kit from 100 years ago, for example, so we’ve got the tradition in there. We created a new badge and stuff. It was a matter of making it modern, we kind of dragged it out of the eighties. And that’s what we’re trying to do with football as well.

Some lady said to me, ‘I’ve had such a great time that I’m going to come back with my grandchildren’, and I said that’s exactly what we’re trying to do, that’s fantastic for us. We want to make football much more modern, much more of a family thing, you know where you can go and have a good time.

Have you been to our ground? It’s awesome. It’s surprisingly awesome. People that come there say ‘oh blimey’, you know. There were some Bristol fans, one of them said, ‘I’ve got some money on you to win the league, you know.

Forest Green Rovers won their first game of the season – a 2-1 victory away at Telford United. Today they play Gateshead.