Temperatures in Australia are projected to rise in the coming decades.

The 2012 State of the Climate report revealed that 2010 temperatures were the warmest on record, and projected that average temperatures would rise by 1.0 to 5.0°C by 2070 when compared with the climate of recent decades.

Models in the study projected an increase in droughts, and also a rising number of ‘intense’ rainfalls.

The map below, produced by risk analysts Maplecroft, highlights the acute water shortages the country faces – and maps these over mining operations across Australia.

Secure access to water is crucial for the development of the mining sector. Australia has huge quantities of iron, nickel, opal, copper as well as uranium deposits.

It’s also the world’s largest coal exporter – ahead of Indonesia and Russia – and the balance future governments will have to strike between coal production and water consumption is plain to see. 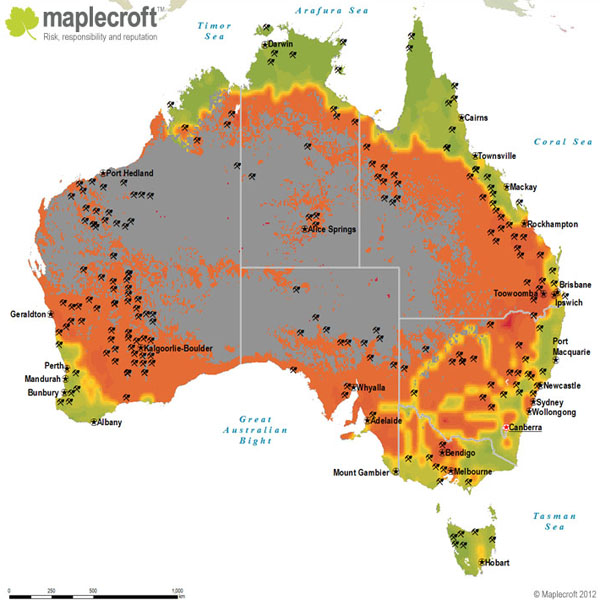 The South East of the country is of particular concern, and Maplecroft’s Principal Analyst Dr Charlie Beldon observes that as climate change increasingly affects precipitation patterns – this imbalance will become even more pronounced.

“Australia faces the twin problems of limited renewable water resources and economic scarcity exacerbated by the uneven distribution of water, relatively abundant in the less populated north but more scarce in the densely populated south, extraction of water for drinking and industrial use in cities can create pockets of economic water scarcity and for some cities such as Perth, rainfall run-off is projected to decrease which will result in further pressure on the water resources.”

“In the southern regions, irrigated agriculture draws large volumes of water from the Murray-Darling Basin which accommodates over 40% of the agricultural income, but where only 6% of the national run-off occurs. This has led to shortages in the past, for example in 2007 when water was reserved only for drinking supplies as the inflows of water to the basin fell to record low levels. This has serious economic impacts on the agricultural sector, as drought relief funds are needed to support farmers and maintain jobs.

“The situation has been exacerbated by extensive extraction for agriculture as infrastructure has blocked and diverted the flow. Extraction of water consumes a large proportion of the average flow, but because of the variability of the flow caused by the effects of the El Nino phenomenon, allocations can easily exceed the true flow of the rivers and existing caps on extraction are frequently exceeded. Reforms of the governance of the basin improved the situation and trading of water has allowed more efficient water use but has the potential to disadvantage small farmers and benefit large professionally run farms.”

Australia’s government has taken action to reduce the country’s carbon footprint in the last few months – it contributes approximately 1.5% to global emissions, but its comparatively small population means it is the developed world’s highest per-capita emitter.

In July Julia Gillard’s government introduced a controversial carbon tax, which ensures around 300 of the worst-polluting firms pay a A$23 (£15; $24) levy for every tonne of greenhouse gases they produce.

The government are still deliberating over whether they will sign up to an extension period of the Kyoto Protocol.

The extension was given tacit backing by the opposition on Thursday – possibly a surprise given their hostility to the carbon tax.

Liberal party climate spokesman Greg Hunt was reported as saying: “What the world really needs is to bring China and India and Indonesia on board, to bring Russia and Brazil on board. I think it will be easier to strike a 2016 agreement to commence in 2020, if there is a Kyoto 2.”

If Australia did sign up it would be the first non-EU Annexe I country to do so. Canada, Russia and Japan have already said they will not join KP2 – the USA have never ratified the treaty.

UPDATE 1801: An Australian climatologist I contacted feels the map’s focus on ‘absolute water availability’ misrepresents the situation in Australia, writing: “I am of the opinion that water stress should not be based on absolutes, but rather, on anomalies i.e. what is different to ‘normal’ conditions for that area.

They pointed out that the map’s portrayal of ‘low to moderate stress’ in southwest Western Australia was optimistic, given the area has been in drought since 1975.  Equally they argued inland areas of Eastern Australia have not been as dry as the map suggests.