Asia’s mega cities must focus on sustainable growth and climate adaptation or face environmental disaster, according to a new report by the Asian Development Bank (ADB).

The ADB has warned that rapid urban growth will have serious environmental consequences and will make more people vulnerable to natural disasters.

Asia has the world’s fastest rate of urbanisation with an extra 1.1 billion people expected to be living in its cities in 30 years time.

More than half of the world’s mega cities, those with populations over 10m, are in Asia. 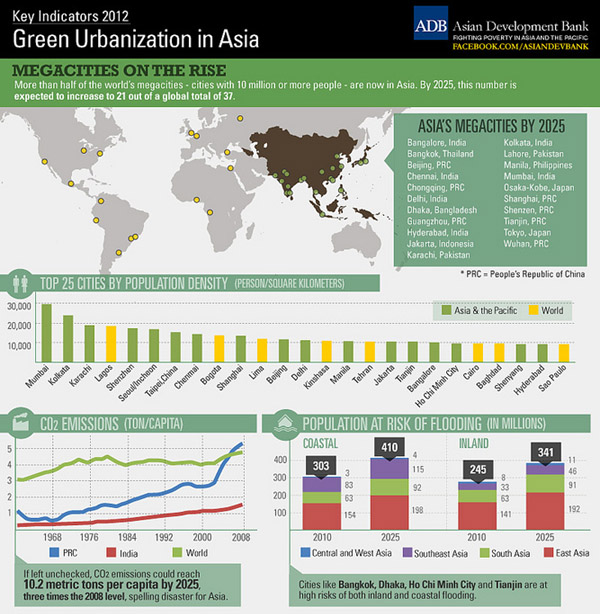 “Asia has seen unprecedented urban population growth but this has been accompanied by immense stress on the environment,” said Changyong Rhee, chief economist, ADB.

“The challenge now is to put in place policies which will reverse that trend and facilitate the development of green technology and green urbanization.”

Bangladesh is at extreme risk to flooding due to climate change as well increased cyclone frequency and intensity. The government has earmarked $100m annually to repair flood defences and build storm shelters but it estimates that it needs $6bn a year to make itself climate resilient.

The ADB report highlights some policies attempting to cut the environmental impact of cities in the region, including vehicle congestion charging in Singapore and the removal of fossil fuel subsidies in Indonesia.

Major floods in Bangkok last year left more than 200,000 people homeless. Although that incident is not thought to be a direct result of climate change, it highlighted the city’s vulnerability to extreme weather events.

VIDEO: The IIED’s Saleemal Huq explains how Bangladesh can ‘weather-proof’ itself