Melting over the Greenland ice sheet has shattered the seasonal record, four weeks before the close of the melting season, according to Professor Marco Tedesco from the City College of New York.

Tedesco, who studies the rate of ice melt in Greenland and co-authors the National Oceanographic and Atmospheric Administration’s Arctic Report Card, said the level of ice melt witnessed by August 8 this year exceeded the record for the full season in 2010.

“With more yet to come in August, this year’s overall melting will fall way above the old records. That’s a Goliath year – the greatest of melt since satellite recording began in 1979,” he said.

A supraglacial lake over the Greenland ice sheet in the Kangerlussuaq area at 1500 m elevation (Source: Marco Tedesco)

The melting season in Greenland usually lasts from June, when the first puddles of meltwater appear, to early-September, when temperatures cool.

Tedesco says this represents a change in Southern Greenland, where ice has traditionally melted for a few days at most. Now the ice sheet is thinning at its edges and lakes on top of glaciers are proliferating.

He also noted these changes show a speedier melt than many models would have suggested.

Greenland has hit the headlines during recent months, firstly for images showing an iceberg twice the size of Manhattan breaking away from the Petermann glacier in northwest Greenland and then following research which said ice melt across the ice sheet could be happening in fits and starts.

Last month, images from NASA also showed an unprecedented melt, where researchers found the Greenland ice sheet had melted over 97% of its surface. 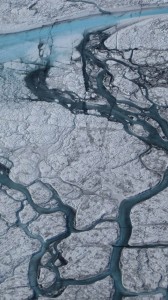 A system of meltwater streams on the Greenland ice sheet in the Kangerlussuaq area (Source: Marco Tedesco)

“That event was exceptional in the sense that it was an extremely rare event,” he said. “This changed the physical properties of the snowpack – making a slushy layer that turned into an icy crust after refreezing – but very likely it did not add to the runoff of meltwater that makes sea-levels rise.”

The cumulative melting index – measuring the strength of melting over the season – which Tedesco monitors, would account for water flowing into the ocean.

He says Greenland is experiencing extreme melting in nearly every region – the west, northwest and northeast of the continent – especially strong at high elevations.

Using similar analysis, Dr Thomas Mote, from the University of Georgia, co-author of the Arctic Report Card, confirmed that the melt in 2012 had surpassed that in 2010.

While most scientific models predict an increase in melt over the Greenland ice sheet as climate change advances, Tedesco urges caution over the latest results.

“We have to be careful because we are only talking about a couple of years and the history of Greenland happened over millennia,” he said.