In the build-up to Rio+20 RTCC  asked businesses and communities from around the world to send us their stories of how they are working to build resilient, low-carbon business models.

The Huong Hoa Tapioca Starch Plant in Quang Tri Province, Central Vietnam got in touch to let us know about the work they have been doing processing the Cassava plant.

Native to South America, the Cassava is now widely grown across the world. The root is a high source of carbohydrates – according to the UN’s Food and Agriculture Organisation it is the third most important source of calories in the tropics, after rice and maize.

This particular factory in Vietnam has the capacity to process of about 600 tones of fresh cassava roots per day to produce tapioca starch for export – this is used as a thickener and stabilizer in soups, puddings, breads, sauces, soy and meat products.

The key for success is that the plant has created a closed loop of cassava use and strategies for sustainable development between factories and farmers. 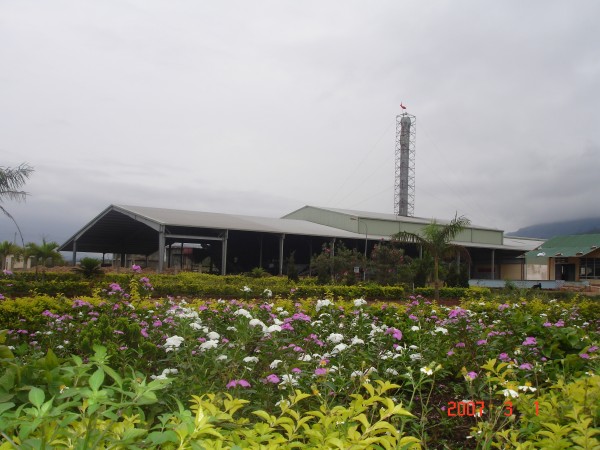 Huong HoaTapioca Starch Plant was built in 2004 at poor mountainous area where there is not much advantage in agriculture. Ethnic minorities are nomadic, so the poverty alleviation is facing many challenges.

The establishment of the tapioca factory provides opportunities for farmers to grow cassava as raw materials for the plant, moved to stable resettlement and generation of cash income.

However, after about five years of planting cassava, cassava production decreased – the soil becomes barren. The plant is in danger of shortage of raw material. In addition, treatment of wastewater and solid wastes discharged from cassava production has not been fully effective, creating pollutions to the surrounding.

The initial achievements become fragile. The plant was facing the risk of forced closure due to pollution and shortage of raw material.

Faced with enormous challenges, in 2009, the plant started research to produce slow release bio- fertilizer from cassava peel waste and provide it to farmers with very low price for soil nutrient regeneration.

The production of slow release fertilizer to the farmers has gradually help restore nutrients to the soil and increase cassava yield. 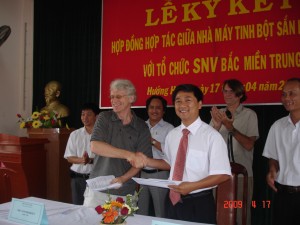 The plant signed a contract to buy cassava to farmers to help farmers secure output.

For wastewater treatment, the plant has invested in an anaerobic  treatment system from the sale of emission credits through the Clean Development Mechanism (CDM).

The system treats wastewater of 2.200m3/day.

Biogas created from the system has been used for as heat for boilers and electricity for the plant.

For farmers growing cassava, the plant has the extension workers and technical support for each area, provided assistance to help farmers in capital and advanced materials through commercial contracts, which could be seen as platform for farmers to have access to market.

Mr. Ho Xuan Hieu, Plant Director, who joined cassava plant from the first day, said that the business philosophy of plant is “Doing Business with the Poor”.

Since then the factory has implemented many measures to help people such as technical manuals, pest control, organize study tours, workshops, helping people at tough time of economic recession.

At present, many ethnic minorities have generated income over 100 million VND / year ($5,000) by planting cassava.

The plant has strong support and full cooperation from local people.

From a poor district, Huong Hoa has gradually get out of poverty and advance to higher living standards than before, in which a contribution from cassava is not small.