South Asia’s emerging economies have the highest financial risk from natural hazards, such as flooding and tropical cyclones, according to risk analysts Maplecroft.

Their Natural Hazards Risk Atlas suggests Bangladesh, the Philippines, Myanmar, India and Vietnam are among 10 countries with the greatest share of their economic activity exposed to such hazards.

They say this is due to high exposure of cities and trading hubs to natural disasters, coupled with their poor capability to recover from events such as flooding and tropical cyclones.

Japan, USA, China, Taiwan and Mexico were identified as having the highest risk in absolute terms, but Maplecroft say these countries have the capacity to recover quickly to natural disasters due to their economic strength, strong governance, building regulations and disaster preparedness.

The warning comes a month after a team of scientists from the UK’s Met Office and the USA’s National Oceanographic and Atmospheric Administration became the latest scientists to find climate change to be increasing the chance of extreme weather events. 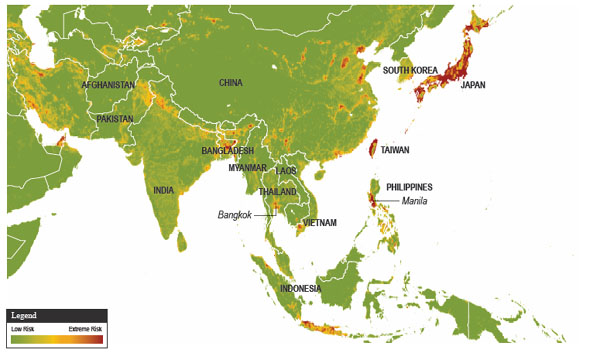 “High exposure to natural hazards in these countries are compounded by a lack of resilience to combat the effects of a disaster should one emerge,” said Helen Hodge, Head of Maps and Indices at Maplecroft.

“Given the exposure of key financial and manufacturing centres, the occurrence of a major event would be likely to have significant impacts on the total economic output of these countries, as well as foreign business.”

It could take years for countries such as Bangladesh and the Philippines to bounce back from disasters, say the analysts.

The Philippines’ resilience is being tested this week as severe floods affecting the northern island of Luzon, including the capital Manila have affected nearly two million people.

Similar floods in in Thailand wiped out 9% of the country’s GDP, and a year on much of the infrastructure has still not been repaired. In contrast Japan, a year after the fourth largest earthquake ever recorded, the economy has returned to the economic output levels and growth forecasts seen prior to the event.

Video: Lead Bangladesh negotiator Quamrul Chowdhury talks to RTCC at the Bonn Climate Talks about the importance of equity for a vulnerable country such as Bangladesh…