The Arctic could become ice free during the summer months by the end of this decade, according to preliminary results from the European Space Agency’s CryoSat-2.

Data from the satellite indicates that 900 cubic kilometres of summer sea ice has disappeared from the Arctic Ocean over the past year.

The satellite was launched in 2010 to study the thickness of the Earth’s polar caps, and has found the sea ice is disappearing at a rate 50% higher than previously predicted.

While previous satellites images – such as those taken from NASA’s ICESat – have found the area covered by summer sea ice in the Arctic to be dwindling rapidly, these new measurements indicate the thickness of the ice has also been affected.

In northern Canada and Greenland ice thickness has dropped from around five to three metres deep. 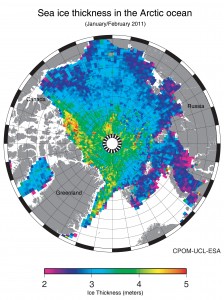 Data from January and February 2011 shows the thickness of the ice as it approaches its annual maximum (Source: CPOM/UCL/ESA)

Speaking on BBC Radio 4’s Today Programme, Seymour Laxon of the Centre for Polar Observation and Modelling (CPOM) at London’s UCL explained the significance of these new findings.

“What the new data shows is we have a strong decline not only in the extent but also in the thickness,” he said.

“By combining the data from CryoStat with the NASA and American satellite called ICESat, which took measurements earlier on in this decade, we can see this very strong change in thickness just happening in this decade.”

The rate of ice loss – higher than most scenarios predicted by polar scientists – suggests that global warming could be beginning to have an increasingly severe impact on the region.

The consequences of losing the Arctic’s ice coverage could mean more sunlight is absorbed into the ‘darker’ oceans – heating up the region even more.

Scientists have warned that methane deposits on the ocean floor could also melt, evaporate and enter the atmosphere.

The disappearance of sea ice around Greenland could also put its glaciers at risk of further melt, rising sea level more rapidly than at present.

Many are also concerned the vanishing sea ice will open the region up to industries including fishing, shipping and oil and gas drilling.

Scientists from the CPOM warn against rushing to conclusions and say these latest predictions are based on preliminary studies of CryoSat figures.