How to cut carbon emissions at Europe’s busiest airport

With all focus firmly on the skies, there is little attention paid to what airports can do to cut emissions in the aviation sector.

Several airlines and plane manufacturers are developing biofuels to dilute their use of fossil fuels, cutting carbon and insulating themselves from volatile prices at the same time. 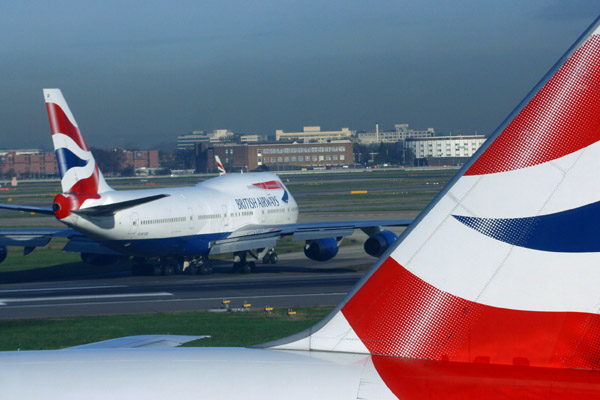 Heathrow is the third largest airport by passenger numbers in the world and it is working hard to cut its own direct carbon footprint and those related to its operations. An estimated 80% of all visitors to the London Olympics will pass through it with Monday 13 August – the day after the closing ceremony – expected to be the busiest day in its history.

There will always be those that say you should avoid flying all together but in the real world, air travel is growing at more than 5% a year and is expected to grow even faster in the coming years.

The planes will fly, so how can we cut the related carbon?

One of the key issues is having the planes on the ground with their engines running for as little time as possible. In 2007, 8.5 million tonnes of CO2 were emitted by delayed planes waiting on the tarmac in the US alone, according to the Environmental Protection Agency. That’s the same as 1.4 million American cars produce in a year.

Add to that the fuel burned during normal operations, taxiing, waiting at the gate etc, and the numbers get even larger.

The airport hosted a trial that included air traffic control, airlines and manufacturers (through the Sustainable Aviation coalition) to look at whether CO2 could be cut from the taxiing, take-off and landing process.

“We found there was enormous potential to reduce those emissions through a number of pragmatic steps working in partnership with airlines,” says Graham Earl, head of climate change at Heathrow.

Simple measures like eliminating sharp turns and inclines during taxing mean planes can use fewer engines and less fuel.

Other routes to cutting emissions require investment in infrastructure, rather than good planning.

“Many planes have a generator to power the AC unit and the lights and so on. If you can just provide a power socket instead, they can plug into that and save money and carbon. We’ve done a lot of work on this which has been passed onto other airports in the country,” he said.

Heathrow’s carbon cuts are not all about the airlines. The site generates 350,000 tonnes of CO2 directly and has an energy bill of £60 million, which it says it is tackling this head-on.

One of the most impressive initiatives is a biomass Combined Heat and Power (CHP) facility at Terminal 2 as part of the building’s £2bn face lift.

CHP plants generate electricity by driving turbines but this heat can also be extracted and distributed for central heating.

The Heathrow plant, which will be one of the largest CHP systems in London will be fed by wood pellets rather than fossil fuels.

The airport has signed a long-term deal to be supplied with biomass pellets sourced from within 25km of the site.

“When we committed to this, we were keen to know where this stuff was going to come from,” says Earl. “The point was not just to transfer the carbon burnt elsewhere and getting involved in enormous supply chains for wood-chip imported from long distances. We were keen for it to be local for that purpose and also to push economic benefits back into the local area,” says Earl adding that there can be question marks over the sustainability of biomass fuel if not sourced carefully.

The airport is also investigating the possibility of installing wind turbines.

“There are specific challenges surrounding windmills and airports. That’s not to say you can’t do it. Birmingham has windmills and we are looking at what’s possible, we are not giving up on the idea,” says Earl. 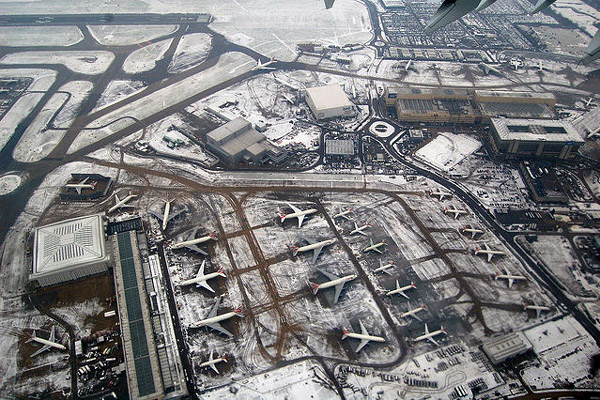 Heathrow from the air, keeping the runways and taxiing routes clear is a mammoth operation. (Source: Flickr/okelydokely)

Adapting to the new normal

As well as cutting its own CO2 output, the airport is also facing new challenges as the variability of weather patterns extends.

“Adaptation has gone rapidly up the agenda, in part driven by the Department of Environment, Food and Rural Affairs’ (Defra) requirements under the UK Climate Change Act for companies to produce adaptation reports,” he says.

“Heathrow is located at a single site. We are here for the long-term and obviously, we don’t have any opportunity to move and go somewhere else. So we have to be able to adapt to what happens in the future.

Many of these adaptation issues are familiar, using water collection to buffer against drought periods and improving the efficiency of its building stock as it continues a period of modernisation.

“It’s just got us thinking about the designs and parameters that we need to be setting for those buildings that allow us the flexibility to respond to future climate change, particularly in relation to temperature and sunlight. There is a predominance of glass these days, is that the right choice?” asks Earl.

Other challenges are fairly unique. For example, the response to a fuel spill must be changed if temperatures climb high regularly.

Extreme low temperatures must also be dealt with – last winter the airport cancelled 41% of flights as a result of serious snow fall.

Improving this resilience is tied directly to cutting emissions from delays and traffic management problems. This means good adaptation work can result in mitigation benefits too.

Aviation may be considered a “dirty sector” but the financial incentives alone should be enough to convince people that airports are serious about cutting their own footprint and helping the airlines to do the same.