Why climate change was a concern in 1943

The weather in the UK has long been a source of immense fascination.

Rain or shine, it’s usually the first topic of conversation with a stranger, followed by a sigh if they are somewhere sunnier (which is generally anywhere else).

The subject of climate change is more a conversation stopper, and one I think of as being a fairly recent phenomenom – which is why I was so surprised to find a chapter on it in a 1943 Pelican Classic I stumbled upon in Pembrokeshire (Wales) last week.

The title leaves little to the imagination – it’s called ‘The Weather’, and it was written by Professor George Kimble, a one-time Royal Navy meteorologist who went on to become First Professor of Geography at McGill University in Canada and Director of the American Geographical Society. 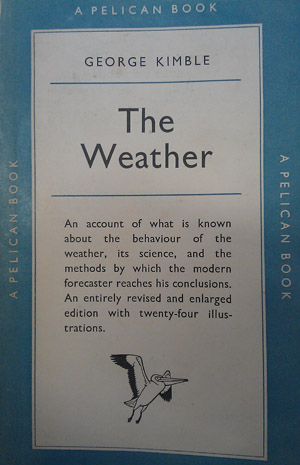 The Weather was published in 1943 and revised in 1951. A review by Nature labelled it: 'chatty and inconsequential'

It’s a lively read – aimed at amateurs (ideal for me) – with some beautiful hand-drawn pictures of helium balloons, various forms of cloud and developing weather systems.

Apart from his focus on ‘Weather Wisdom’ (red sky at night etc) I was drawn to the penultimate chapter ‘Is our climate changing’, as I suppose I had not considered this was the subject of much fascination before the 1980s.

Kimble touches on the variety of climatic changes that have affected the planet – from the ice sheets that covered the northern hemisphere 50,000 years ago, the wet summers recorded by Egyptian geographer Alexander Claudius Ptolemaeus in 100AD  and the large numbers of farms in Greenland during the 11th century.

But it’s his own era (1940s) that most concerns Kimble: “It could be argued that some of the most startling changes of which we have certain knowledge are going on at the present time,” he writes.

“The most conspicuous and widespread change is in the realm of temperature, and by change we do not mean fluctuation. Temperature variations are nothing new.

“What is more novel is the fact that currently these variations are not remaining within the limits we should expect from an examination of, say, a twenty-year, or even a thirty-year run of weather statistics.”

It’s hard to know where Kimble gets his stats from (there are no references) but I am assuming this is long before the climate debate became so polarised, so here are his findings:

He warns of receding glaciers (particularly the Colombia Ice Field) together with decreasing levels of precipitation in Africa, Australia, Brazil and the USA.

Kimble also records the disappearance of sea ice in the Barents, Hara and Gulf of Bohemia as other indicators that the seas are warming. In an era where weather and climate changes are becoming increasingly prevalent, it makes a fascinating read – especially when you come to his ‘Possible Explanations’ chapter.

The best answer in 1943 was “the sun”, but Kimble added that this is only a hypothesis, and that “perhaps in fifty years time there will be a long enough record, with a global coverage, to enable us to establish an exact correlation between solar and terrestrial variables”.

He cites four other theories, which relate to the earth’s axis, Co2 levels, shifting continents and variations in volcanic dust. Kimble said he had no evidence regarding Co2 levels “although admittedly there is not much statistical information available on this matter”.

Since 1943 great advances have been made in our understanding of what affects the climate – based on the work of scientists Joseph Fourier and John Tyndall in the 1800s.

In the 1960s CD Keeling discovered that levels of Co2 in the atmosphere were rising fast, providing the foundation for current theories on what is causing climate change.

But back in the 1940s, when Kimble was writing this book while undertaking vital duties for the Royal Navy during the Second World War, these statistics were not available.

Even so, you sense he did have a sneaking suspicion that humans were having an abnormal effect on the plant – I’ll leave you with his closing paragraph.

“Somewhere in all these foregoing facts and figures there must be a moral, which we will allow the reader to draw for himself. To us this much, at least, is clear, namely that the scientists and technologists of our generation are likely to do far more to increase the sum-total of human happiness by restoring the lost equilibrium between earth, air and water than by attempting to produce a new one of their own contriving”.

If you’d like to buy a copy (I’m not on commission) The Weather is available on Amazon, and selected second-hand bookshops in Newport, Pembrokeshire.