A global deal to address emissions from the aviation sector should concentrate on cutting carbon, not raising funds, an industry insider has told RTCC.

The EU has included all flights that use EU airports in its emissions cap and trade system as of this year, regardless of the nationality of the airline, and given the importance of European airports, it’s a move that affects all major operators around the world.

Aviation generates at least 3% of the EU’s total greenhouse gas emissions and EU emissions from international air travel have doubled since 1990.

While the decision has the support of all 28 EU member states, a number of countries including India, Russia and the US oppose what they see as a “unilateral” move. 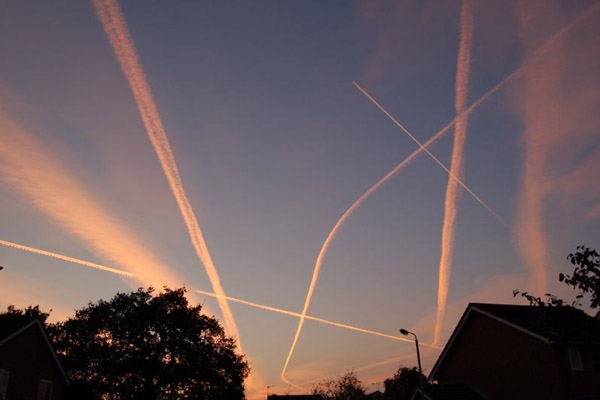 Con trails from aircraft in the skies between London's Heathrow and Gatwick airports, one of the busiest aviation hubs in the world. (Source: Flickr/Chris.Loxton)

A bill is currently working its way through the US Congress to ban American airlines from taking part in the trading scheme, with opponents labelling the ETS an ‘assault on our sovereignty’ and an ‘illegitimate tax’.

In 2011 the Point Carbon website estimated the cost to participating airlines would be in the region of €1.1bn, although the price of carbon has fallen dramatically since then.

A significant proportion of that cost is expected to be passed onto customers in the form of rising ticket prices, and a US airline industry insider has told RTCC that as it stands, they are not convinced the scheme will achieve a significant reduction in emissions.

“A lot of the climate financing discussions have really just been about raising money, but if a scheme is well-designed and global in nature, then it should also be able to reduce emissions, which is the most important part of the challenge.

“Taxes seem to be quite a blunt instrument which delivers money to government coffers, but does not provide necessary emissions reductions,” they added.

Aviation has been billed as a possible source of finance for the UN climate agency’s Green Climate Fund, which aims to guarantee carbon reduction projects around the world.

Critics of the airlines say they are simply looking to stall attempts for them to account for their emissions – aviation is the most carbon intensive and fastest-growing source of transport CO2 emissions.

The US-based Environmental Defense Fund (EDF) has noted that if the US government complains about the EU to ICAO, a panel of five members, that are not directly involved in the dispute, acts as the jury.

With 16 other countries joining the US in the so-called “coalition of the unwilling” and EU member states all discounted, only Burkina Faso, Morocco, and Swaziland remain, two short of the requirement for five members.

“The airlines have already tried the lawsuit tactic before, and they lost. After two years of court argument, a panel of thirteen judges on Europe’s equivalent to the U.S. Supreme Court held that the program was fully consistent with international law,” the EDF’s Annie Petsonk wrote in response to last week’s meeting.

“That kind of lawsuit would be decidedly counterproductive if the administration’s real goal is – as it has repeatedly stated – to get action in ICAO on limiting greenhouse gas emissions from aviation,” she added.

What options are on the table?

According to www.greenaironline.com, there are three options on the table for a global emissions deal that will be presented to ICAO at its next assembly in 2013. It is unclear whether this work could continue if a dispute on emissions trading was passing through ICAO.

Mandatory offsetting – Airlines are awarded an allowance of CO2 and are then obliged to offset it in the same way as a passenger may choose to do to cover CO2 from their own travel.

Mandatory offsetting with a financial mechanism – This is basically a more complex version of the above that rewards airlines that offset more than their own emissions. It is thought to be the least popular due to its complexity.

Cap and trade – The most familiar system would be similar to the EU emissions trading scheme with caps on CO2 output assigned and airlines left to purchase required excess credits or shake-up their operations to stay within the bounds of their designated emissions.