The EU could halve its emissions from its power plants by 2050 through the combined use of carbon capturing technologies and burning more biomass, a report has found.

The study by the European Biofuels Technology Platform says that carbon negative power is possible if power stations mix more energy crops with fossil fuels to fire their plants.

Carbon capture and storage (CCS) involves collecting the CO2 emissions from a power plant and storing it inside rock formations. 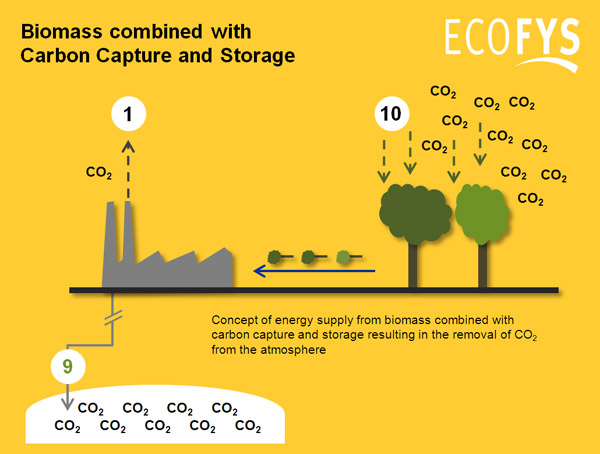 A diagram showing how 90% of CO2 from biomass used with CCS can be removed from the atmosphere and held in long term storage. (Source: Ecofys)

When used with fossil fuels, the carbon that was in long term storage as oil, gas or coal, is returned to those stores, rather than entering the atmosphere and driving up temperatures. This approach is carbon neutral.

However, if trees and other energy crops are grown, they can draw CO2 out of the atmosphere. If they are then burned in a power station with CCS fitted, the net result is that CO2 in the atmosphere has been reduced.

The report calls on Europe to address climate change by targeting carbon negative solutions. It also states that globally, this technique could remove 10 billion tonnes of CO2 a year from the atmosphere, a third of the output from power stations worldwide.

With CO2 emissions continuing to rise despite the best international efforts, the importance of removing CO2 from the atmosphere is increasingly urgent.

The UN’s climate science advisory board, the IPCC, has identified 450ppm as a tipping point for the earth’s climate. In the past, an earth with a level of 450ppm was entirely ice free.

The campaign group 350 takes its name from the preferred upper limit on CO2 in the atmosphere to reduce the impact of climate change.

CCS technology is still under development with governments and industry working together to find economical solutions.