It is the biggest peacetime logistical exercise Britain has ever faced – the equivalent of holding 26 world championships simultaneously in the heart of the biggest and busiest city in Europe.

For more than two weeks, nine million spectators and 300,000 athletes, officials and media descend on a city whose aging public transport infrastructure and sclerotic roads network struggles to keep its seven million residents and businesses moving. 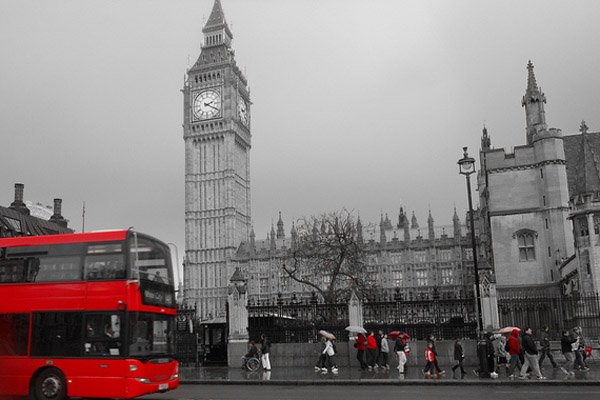 Keeping London moving during the Olympics is a major logistical challenge. (Source: Flickr/ArthursSword)

Small wonder that in the weeks leading up to the Games, the media was predicting transport chaos: a city-wide traffic jam as the capital’s arteries seize up. And yet the more lasting legacy may be quite the opposite. First, an array of new rail lines and cycleways, and truckloads of freight shifting from road to river, is helping to ease the flow. And second, good green habits learned during the Games – some of them out of necessity – could be a tipping point for lasting change.

Far from being a horror story of urban gridlock, says Shaun McCarthy, chairman of the Commission for a Sustainable London 2012, the independent body set up to monitor the sustainability of the Games, the Olympics “provide an incredible opportunity and we must grasp it with both hands”.

For the first time in its (modern) history, the organisers promised that 100% of the spectators, along with most of the workforce, would travel by public transport, bike or foot. (A few exceptions have been made for disabled drivers and taxis.) And 50% of the construction material, too, had to be delivered by rail or barge (the target was smashed with 64% being moved this way).

It was an ambitious goal which needed some sleek new infrastructure to get there. Hence the £6.5 billion spent on transforming East London from transport desert to one of the most well-connected parts of town.

There’s a second Docklands Light Railway line, a new branch of the East London line, and greater capacity on other routes, too. By comparison, a mere £10 million has been judged enough for 75km of new walking and cycling routes for the area, with the Barclays (‘Boris Bike’) cycle hire scheme being extended to embrace the Olympic Park.

Cycling’s not only the cheaper option – it’s also one with a huge potential for growth. That is the conclusion of a ‘transport legacy action plan’ drawn up by Transport for London [TfL] and a number of the capital’s authorities. Only 1% of all journeys in East London are made by bike – just half the city’s (still low, by European standards) average. TfL hopes that by promoting cycling heavily in schools and recruiting some high-profile cycle champions, through the London 2012 Active Travel Programme, it’ll provide a kick to the pedals. 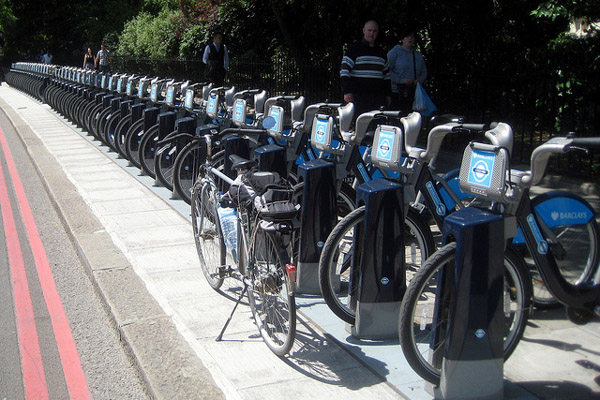 A row of for hire cycles in London. The scheme has proved hugely popular with commuters looking to avoid the tube. (Source: Flickr/SirPecanGum)

London’s waterways, such as the Thames and the Lea, were once its principal freight highways. That’s a role which the Olympics organisers were keen to revive.

They dredged a stretch of the Lea to make it navigable by the big barges which ferried construction waste off the site. Logistics company UPS, which is handling the entire logistics of the Games, trialled using barges to transport some of the 750,000 items of furniture required for the Athletes’ Village from its warehouse at the Port of Tilbury to the Olympic Park.

Peter Harris, Director of Sustainability for UPS EMEA, explains that each barge can take the load of 20 container lorries. The trial will help establish the extent to which shifting freight onto the water can cut carbon and other emissions, and so help inform plans for the river’s future.

But no amount of tinkering with top-down modal shift will have much of an impact if people can’t be persuaded to change their travel choices. If all the new infrastructure works as hoped, says the legacy plan, then it could be “a once in a lifetime opportunity to change people’s perceptions of travel”.

It could have added that it will be a once in a lifetime essential, too. The height of the Games will see three million more daily journeys than normal in London.

To keep the city moving, TfL aims to cut by 30% the ‘background’ traffic of those who would normally take public transport. Working with local authorities, Sustrans, the NHS, the Ramblers and others, it is encouraging Londoners to shift to walking or cycling through its Active Travel Programme – or even stay at home altogether.

A key feature is high-tech journey planning, with up to the minute information on the length of time different modes of transport will take to get from A to B. TfL hopes that when people realise how quick it is to walk or cycle, for example, instead of their usual habit of jumping on the Tube, they’ll form the sustainable habits of a lifetime.

The same message is going out to business, too. Groups such as the London Chamber of Commerce and London First are encouraging more deliveries by cycle or on foot, and where that isn’t possible, to streamline them via the use of TfL’s newly launched online freight journey planner.

They are also calling on businesses to adopt techniques like homeworking and video conferencing to cut out the need for the daily commute. In February, mobile phone network operator O2 asked a quarter of its 12,000 strong workforce to work remotely, to test the robustness of its IT systems. The company sees flexible working not just as a contingency plan for the Olympics, but as integral to its goal of saving 500,000 miles of travel over the next three years.

All these changes might be triggered by the necessity of avoiding an Olympian-scale jam during a few weeks in 2012 – but the long-term goal is to change the city’s travel habits for good.

This article originally appeared in Green Futures, the leading magazine on environmental solutions and sustainable futures, published by Forum for the Future. Terry Slavin is a freelance journalist specialising in business and environment.