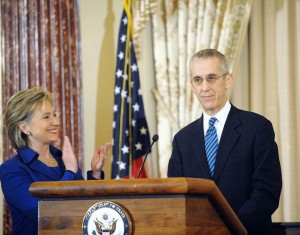 Todd Stern calls for a more 'flexible' climate change agreement, even if this does not guarantee the 2 degree target is met (Source: State Department)

The 2°C guarantee should be dropped from the global climate change deal to allow for more flexibility and avoid deadlock, US Special Envoy for Climate Change Todd Stern has said.

Speaking at Dartmouth College he said removing the 2°C specification from the agreement would allow countries to get on with actions to limit climate change now while leaving it open for further ambition at a later date.

“It is more important to start now with a regime that can get us going in the right direction and that is built in a way maximally conducive to raising ambition, spurring innovation and building political will,” he said adding that insisting on an agreement that would guarantee the 2°C limit would only lead to deadlock.

The 2°C target, which all countries signed up to at the Copenhagen climate conference in 2009, follows from the work of the Intergovernmental Panel on Climate Change looking at the impacts of climate change which surpasses this limit.

In Durban last December, countries signed up to the UNFCCC, agreed to put together a global climate agreement by the end of 2015 to be effective in 2020.

The next meeting, taking place in Doha, Qatar this December will continue these talks.

A ‘flexible’ agreement should begin with countries submitting their own targets to the UNFCCC, said Stern, with an opportunity for public consultation after six months to help drive ambition further.

He said a ‘highly prescriptive’ climate agreement would be hard to agree to for all countries who could see this as a hindrance to growth and development, but that a new deal should be flexible enough to allow for modification as technological advancements make emissions reductions easier in the future.

“The key to making headway in this early conceptual phase of the new agreement is to be open to new ideas that can work in the real world and to keep our eyes on the prize of reducing emissions rather than insisting on old orthodoxies,” he said.

He told the crowd that the negotiations were at an ‘interesting juncture’ following the results in Durban – which saw all countries agree to be part of a future deal setting out climate change targets.

“You can not build a system that treats China like Chad, when China is the world’s second largest economy, largest emitter, second largest historic emitter, [and] will be twice the size of the US in emissions in a few years,” he said.