For the duration of the Olympics, behind the Savoy hotel, a London building is flying the Qatari flag and has perched a metal detector at the top of the red-carpeted stairs. 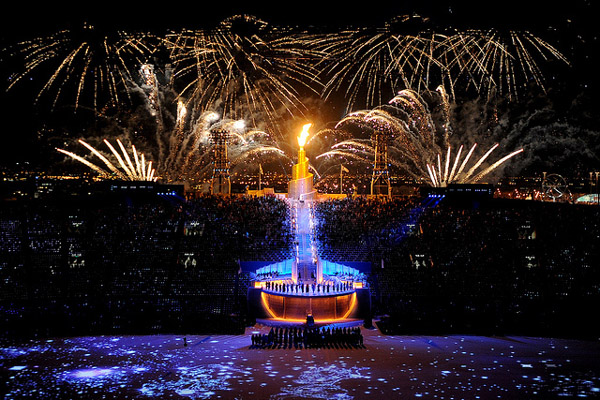 The opening ceremony of the 2011 Pan Arab Games in Doha. (©Qatar Olympic Committee)

Inside Bayt Qatar, its Olympic National Hospitality House in London, Qatar showcases its past successes, future dreams and the guiding philosophies behind them.

The country’s vast oil and gas reserves (mainly gas) and its per capita footprint (the largest in the world) drew criticism when it was selected as the next host of the UN climate change talks.

This is slightly unfair. If you look a little deeper there is the glimmer that Qatar’s petrodollars could make a contribution to the world beyond skyscrapers and rather a lot of emissions.

When the United Arab Emirates were formed in 1971, Qatar was asked to join the new nation that would include Abu Dhabi and Dubai. It said no.

For many of the intervening years we didn’t hear much about the tiny peninsula but in the last ten years we have heard plenty.

Some of this progress has been very public, such the rise of the Al Jazeera media empire, hosting the 2022 World Cup and making big investments like the Shard skyscraper and the Harrod’s department store in London.

In diplomatic circles it has hosted the world trade talks, it was the only Arab State to intervene in Libya, it has inserted itself into a prominent position in the Afghanistan peace negotiations and later this year it hosts the UNFCCC climate change negotiations.

The country’s growth is underpinned by sustainability, culture, sport, development, and education.

Its progress has been slightly slower and certainly less flashy than its near neighbours in the UAE but the plan is coming together and the benefits could reach beyond its borders.

Sport has a big role in this development with the evidence on show at Bayt Qatar.

The Doha Goals programme look to explore ways that sport could make a greater contribution to society. The Aspire Academy provides elite training for promising young athletes as well as health education for the general public.

It has hosted a number of regional sporting events – the Pan Arab games and the Asian Games – as it continues to pursue its dream to host the Olympics. 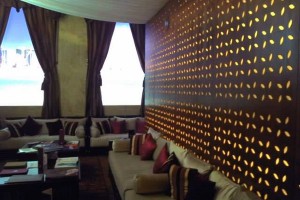 The Bayt Qatar Hospitality House brings a little Doha to London. The country hopes to emulate the current host city one day.

The sport themed room at Bayt Qatar, just round the corner from the aromatic mock Souk, displays a model of the centerpiece stadium for the 2022 World Cup.

Solar panels will drive a unique “cold air cushion” that will protect those inside from the 45°C temperatures outdoors.

Three quarters of the stadiums built for the event will be dismantled and redistributed in Africa.

The government has also said technology under development for solar powered desalination plants will be shared with other dryland nations.

Redevelopment of the capital Doha is being carried out with sustainability in mind with shaded boulevards and climate smart architecture the order of the day at Lusail City and the Msheireb Downtown project.

The UNFCCC looks to create flows of capital, technology and education to solve the problems created by climate change and to reduce its impact. Qatar is doing all of these things itself.

The UN climate change process is geared up to create a global deal on emission reductions. Qatar’s growing diplomatic weight could grease the wheels of the talks.

I wouldn’t be surprised to see a grand gesture from the hosts prior to the negotiations to set the pace and raise ambition among the talk’s other 193 participants.

Inspiration through sport has been partially misappropriated by marketers and film directors but its power is on show in London and continues to be harnessed in Qatar.

As Qatar looks to punch above its weight on the world stage, it has the opportunity to knock down a few global challenges along the way.