A year on from the Horn of Africa disaster and two good rainy seasons have helped to relieve the pressure and aid recovery in the region.

But there is an underlying feeling of helplessness for communities in the region living at the mercy of possible future dry periods.

With the potential of another dry spell always just around the corner, the efforts of NGOs and Aid Agencies is moving away from emergency relief to building resilience in the region. 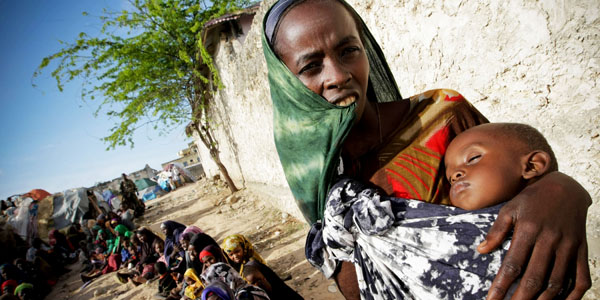 They want to ensure a similar event will not have the dire consequences – an estimated 50,000 and 100,000 deaths – it had in Africa last year.

“Memories about the last drought are almost erased because we have received two very good seasons consecutively,” says Abdul Haro from Practical Action. “But the long rains in April to June were below optimal levels and should the short rains expected in October and November fail, then there will be trouble.

“Currently there is plenty of pasture and water pans have water, although recently a few areas have started reporting water stress for humans.” 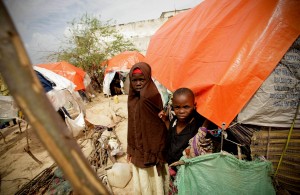 The humanitarian disaster caused over a million people to leave their homes (Source: Stuart Price/UN Photo)

Drought is a complex phenomenon, caused by multiple contributing factors. It is still impossible for scientists to fully associate one extreme event to climate change.

But scientists agree that the chances of these events heighten with advancing climate instability.

A recent report from scientists at the UK’s Met Office and the USA’s National Oceanographic and Atmospheric Administration (NOAA) found that the number of below average rainy seasons in East Africa could have been attributable to warming in the Indian and Western Pacific Oceans.

But the drought and subsequent food crisis in east Africa was not just about a lack of rainfall. This year much of the US, Canada and parts of Europe have also experienced drought conditions, and yet life in these countries continues relatively normally.

Chronic poverty, malnutrition, weak health systems and poor vaccination coverage as well as political instability and a lack of access to clean water all contributed to the Horn of Africa food crisis.

The lack of investment in the region and a changing climate further exacerbate these problems.

They also make resilience to the predicted frequency of future events much harder in the region.

Aid agency Christian Aid works with both pastoralists and agriculturalists in Kenya, and has found that building resilience is largely about diversifying their income.

For pastoralists this could mean adding diversity into their livestock by adding animals able to cope with drier conditions – for example chickens – or could mean broadening their livelihoods out further.

“We are introducing practices like farming using greenhouses for vegetable production,” says Nicholas Abuya, Resilience Officer for the Christian Aid East Africa team. “We are also introducing bee-keeping because these areas in Northern Kenya where pastoralists work are full of shrubs and trees which are great for bee-keeping.”

“And other aspects like bread-making for young people and women. We have found that things like bread are products which are quite in demand so we see this as a source of income, especially for women.”

Similar ideas are adopted by small holder farmers in the region, where they are encouraged to plant trees on farms. Abuya explains that planting fruit trees, such as mangoes or oranges, diversify the products which farmers can sell and offer a more resilient crop in dry weather than corn or maize.

He says, they also encourage farmer living near water sources to use small scale irrigation systems to protect their crops, broaden what they can grow and make sure they grow enough to earn income as well as feed their own families.

Another way of building resilience to drought conditions is to make sure households and communities have access to a safe and reliable source of water.

Harnessing the water from rainy seasons and storing it will also be a huge step towards protecting farmers and pastoralists from prolonged periods of drought. 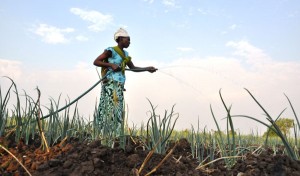 Access to clean and reliable water supplies will be vital to both communities and workers in the Horn of Africa (Source: DFID)

“In these areas the rain normally comes seldomly but when it does come it rains with a very heavy intensity,” says Abuya. “The water runs-off down the slopes and we are looking at capturing this water through water pumps and using that.”

Making sure communities can travel distances to collect water during the dry season will also help build resilience. Often a families and workers main tool for this is a donkey – which they also use to collect fire wood and pull carts to market.

In Elwak in Somalia and the Takaba, Rhamu and Manera districts in Kenya, about 2,000 households get around 50% of their income using operations involving donkeys. In Mandera alone there is an estimated 191,664 donkeys.

The health and fitness of this animal is of huge importance, explains Haro.

“Our programme to improve the welfare of working animals has enabled us to improve the help, and therefore longevity, of around 45,000 donkeys,” he says. “This improves the capacity of the farmers who own them to produce and carry more food so that they can feed their families more effectively and earn money.”

The slowness of the response following early warnings of the 2011 drought has been heavily criticised by aid agencies.

But while outside observers have a role to play, information on the ground in the region will also play a huge part in building the resilience of communities.

In Rio, at the Earth Summit, the Global Framework for Climate Services was launched by the World Meteorological Organisation, with the aim of giving any person or community around the world access to information about their own vulnerability to climate change – helping them to adapt to new realities. 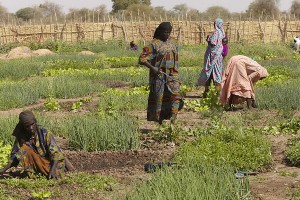 On the ground in Kenya, engaging with people on a local level, as well as working to build bridges between the farmers and the weather forecasters, will play a key role in providing them with the information they need, on a seasonal and a day-to-day level to protect their livelihoods.

“The onslaught of drought is generally quite slow, it does not hit like a flood or a hurricane,” says Abuya. “We have engaged with the local communities through their traditional structures.

And Abuya says over the last year the engagement from local communities has shown a positive move towards building resilience.

“We have seen a reawakening of the communities who are mobilised to take the lead in disaster risk reduction unlike in the past.”