Ice loss from Greenland’s ice sheet could happen in short bursts, according to new research.

The study, published in the journal Science, found the surge in ice loss witnessed in Greenland between 2005 and 2010 – which drove up sea levels around the world – might not have been unprecedented.

The 2005-10 ice melt also showed the ice was sliding rapidly into the ocean. 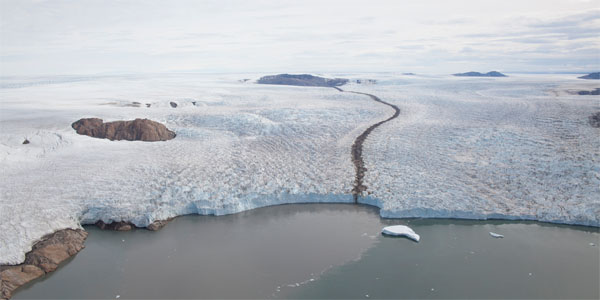 New images released by NASA last month also showed evidence of an ‘extreme’ ice melt event in Greenland, and separate images show an iceberg twice the size of Manhattan break away from the Petermann glacier in northwest Greenland.

The new study found a similar spurt to that which happened in 2005-2010 also happened between 1985 and 1993 – and possibly decades earlier as well.

The study used aerial photos dating back to the 1980s to plot the shrinking of glaciers around the island’s northwest coast.

While the researchers say the surges can be tricky to predict, better models will mean that more confident predictions could be made of its behavior.

Scientists predict that a complete melt of the ice sheet would raise sea levels globally by an estimated 7m.

“Our results show that the thinning of the ice sheet at the end of the 80s and beginning of the 90s eased over a 4-8 year period, after which a period of stability occurred until 2003,” said Kurt H. Kjær, University of Copenhagen Associate Professor.

“Our conclusion is therefore, that if we judged against longer periods of time, the current thinning of the ice sheet is likely to ease within an 8-year period.”

The researchers hope to examine aerial photos extending back possibly as far as the 1930s.