In the heart of London’s West End, it is one of the city’s biggest and busiest high streets – a shopping destination for Londoners and tourists alike.

But far too often consumption and unsustainable lifestyle habits go hand-in-hand. In a report in the lead up to the Rio+20 Earth Summit earlier this year, NGO Christian Aid said that tackling over-consumption would be even more vital than tackling over-population in ensuring sustainable development.

RTCC runs through five tops tips for shoppers who still want to live by the three R’s of sustainability – reduce, reuse and recycle.

Explore the world of pop-ups

Pop-ups are essentially temporary retail space. Often found in disused building spaces, they can last anywhere between a day and five years – see the Boxpark mall in London’s Shoreditch.

In many ways the Pop-up movement embodies many of the same ideas as the green movement – taking unwanted, disused space and transforming it into some new and creative.

With one in six shops on UK high streets lying empty – and 20 more stores closing everyday – this principle offers a great way to both make the best use of the available space a city has to offer, while at the same time giving small and often new businesses and brands a brilliant chance to make their mark.

And it doesn’t stop at shops; pop-up restaurants, art spaces and theatres are also quite literally popping up all over the place.

If you’re heading into London this week, the Pop Spot Festival is offering a great chance for you to explore a side of the city you may not have experienced before. Organised by We Are Pop Up, the festival has over 300 pop-ups mapped out across the city, just waiting for you to find them.

Reduce your plastic bag use

If you are heading out to the shops this weekend, why not take a couple of reusable bags with you and cut down on your plastic bag use.

500 billion plastic bags are used worldwide every year. The average EU citizen uses around 500 in that space of time – mostly only once.

Recent figures from waste reduction body WRAP says shoppers used nearly eight billion plastic bags in the UK in 2011 – up 5% on 2010. This second successive year of increase has led many environmental campaigners to call for a charge to be made on plastic bags across the country.

Last year Wales brought in a £0.05 charge for plastic bags while earlier in the year the US City of San Francisco and the Canadian city of Toronto both voted to ban their use.

This year, the EU have also be considering what to do about single use bags – with one possibility being an EU wide ban on their use. 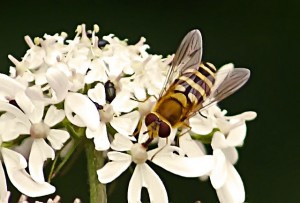 Shopping on Regent Street? Look up and see if you can spot their colony of bees (Source: antaean/Creative Commons)

If you are trying to find somewhere to do your shopping, why not support those high streets who are implementing some creative sustainability measures.

In 2009, London’s Regent Street for example, begun producing its own honey, thanks to a colony of more than 15,000 bees installed high above the shoppers on building rooftops – boosting biodiversity.

The high street has also put work into their recycling – offering a simple two (coloured) bags system of mixed waste and recycling to make it simple for offices and shops. This recycling is also collected using an electric powered milk float.

Around 1.5 million tonnes of unwanted items – clothes, shoes and accessorises – are thrown away every year, ending up in landfill.

If you’re looking for something to freshen up your own wardrobe, but want to limit your footprint, why not swap buying new with buying old.

Vintage fashion is hugely popular in London, as well as most cities around the world, and you can find great stores and markets in whatever part of town you are in.

Why not check out Camden Market or if you are in East London, the Sunday Up Market on Brick Lane will have not only some great vintage buys but also a range of stalls supporting independent fashion and jewellery designers.

Or if markets aren’t your thing, a wealth of stores in Covent Garden stock vintage clothing, or dig out a Traid store (can be found in Camden and Brixton amongst other boroughs), which sells second-hand and upcycled clothing.

And it is not only clothing you can purchase second hand from London’s stores – for example if you are wanting to following in the footsteps of Britain’s gold medal winning cyclists, Re-cycling in Elephant and Castle can help get you on your way.

And if your not in London why not explore your local area and see what hidden gems you can find – either a great vintage store, or a great item of clothing from your local charity shop.

Make do and mend 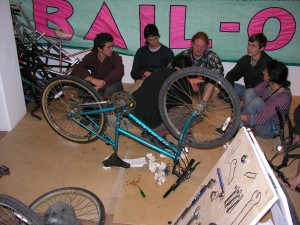 Why not make do and mend with the help of those who know how (Source: Object.../Creative Commons)

If you have something you think needs replacing why not see if you can make do and mend.

Repair cafes have been a huge trend in the Netherlands for sometime now – making their debut two and half years ago.

The aim is to provide a social event, while at the same time promoting sustainability and reducing the CO2 which goes into making new products.

The general idea is that you can take in anything that needs repairing and at no cost volunteers – people who like to fix things – will see what they can do to your item. And while you sip your coffee you will also learn the skills to repair your own belongings in the future.

Over 40 groups now run repair cafes across the Netherlands, held in community centres, auditoriums and various other public spaces. And the UK has also picked up the baton, with the Good Life Centre in Waterloo, London, holding its first repair workshops this summer.