1735 Facebook has revealed it’s carbon footprint for the first time and the mix of energies it uses to power its data centres. These vast banks of computer memory store all the holiday snaps, likes, dislikes and thrown sheep of its 900m users. It’s footprint of 285,000 metric tonnes a year is less than a fifth of Google’s. Only 23% of its electricity comes from renewable sources so plenty of room for improvement Mr Zuckerberg.

1622 A new study has found that mangroves represent a good way to store carbon. The ecosystem can also protect against erosion, boost biodiversity and support fish populations.

1540 The EU/US aviation row rumbles on this afternoon. German MEP Jo Leinen told EurActiv: “It would be absolutely arrogant to prohibit American companies to comply with EU legislation. This would be an unprecedented step to thwart the legal standards in Europe. The decision would be ignorant as well because it neglects the increase in greenhouse gas emission caused by aviation.”

1250 The IEA has warned of the potential of six degrees of warming by the end of the century. “That’s basically Miami Beach in Boston,” said Richard H. Jones, Deputy Executive Director.

1045 The Exxon-Valdez, which was involved in one of the worst environmental disasters of all time, is to be dismantled after an Indian Court ruled that it contained no hazardous material.

0910 The US-based Environmental Defence Fund (EDF) has hit out at the US Senate after it passed a bill that could effectively blocks US airlines from taking part in the EU carbon trading scheme. The EDF called it “short-sighted” adding that the last time a US bill interfered with international law was apartheid in South Africa. “Airlines…are acting as though an anti-pollution law is as grievous as a massive human rights violation.”

The move by the Senate comes as nations opposed to the EU plan meet in Washington.

0840 With the Indian blackout now over, talk is turning to other parts of the world that could find themselves in trouble with California mooted as one potentially vulnerable area.

0835 The Indian blackout appears to be under control with electricity fully supplied. The media has been scathing in its assessment of the situation.

“After decades of scientific studies, climate change is no longer something being debated, it’s being experienced.” relm.ag/T2c7rZ

This is image of a 75m Siemens wind turbine blade under construction and provides a better idea of the sheer scale of offshore wind turbines: 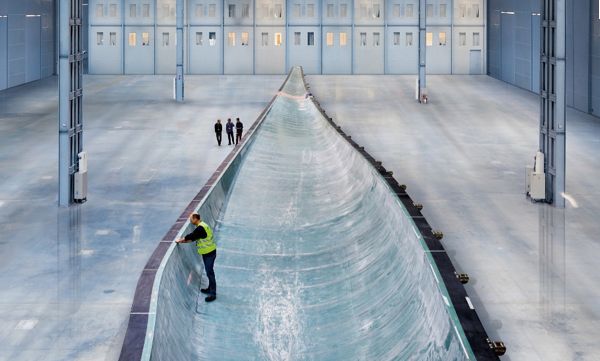 Great story on AllAfrica.com about what Zambia is learning from Germany’s renewable energy industry.

And another from the same site, Zimbabwe’s unlikely climate change ambassadors…

The World Will Eat Itself