Devastating cyclones, dangerous floods, drought and ruined crops contribute to making Bangladesh one of the world’s most climate-vulnerable countries.

A 2011 study from analysts Maplecroft rates Bangladesh at ‘extreme risk’ from climate change.

Home to more than 150 million people, it is a low-lying nation dominated by floodplains and surrounded by mountains and three sides, with the Bay of Bengal opening wide in the south. 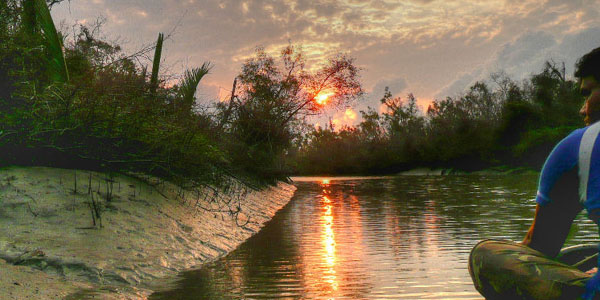 Bangladesh is uniquely positioned with the Bay of Bengal stretching out to the South (Source: Joiseyshowaa/Creative Commons)

High population density, chronic levels of poverty and an overwhelming dependence on the land for food and economic prosperity add to this difficult situation.

Climate-proofing is high on the list of priorities for Bangladesh. The country has already invested money into building cyclone shelters, creating early-warning systems for storms and has set out a $5 billion climate strategy for the next 10 years.

But with the country ranking low on the UNDP’s Human Development Index, adaptation will require higher levels of financial help than it currently enjoys. 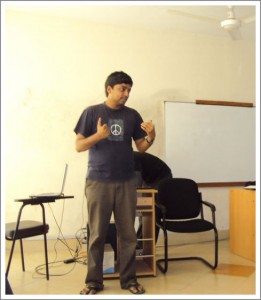 For the Bangladesh Youth Movement for Climate, building the country’s capacity at the annual UN climate negotiations is vital.

In the latest in RTCC’s youth series, Abdullah Al Razwan Nabin from the BYMC talks about how his own experience following Cyclone Sidr in 2007, which killed over 10,000 people, opened his eyes to the need for a youth-led movement in the country.

I went to Mongla, a sub-district in the southern part of the country and near the Sundarban Mangrove forest for an official visit in 2007 just a week before Cyclone Sidr hit.

Just one week after our visit the devastating Cyclone took more than 10,000 lives and destroyed the coastal area. Immediately after I went to the area again and I was motivated to do something for my country and its people. After that I started working with an Oxfam supported initiative called Youth in Action on Climate (YAC) and attended the first South Asian Youth Summit on Climate Change (SAYsoCC) in 2009 in Nepal.

We also create opportunities for young people to attend many national and international climate events to build their capacity. 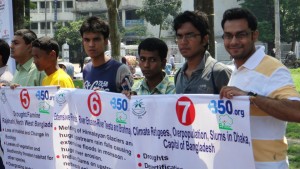 Capacity building of youth is one of our priorities.

We have also partnered with existing youth organisations like the Bangladesh Red Crescent Society to learn from their youth volunteers on climate change issues. A workshop was also organised in collaboration with Stanford University to enhance young people. Ricksha – our local transport – was organised with the Hecua Student group from the US in Dhaka to raise awareness on climate change.

At the moment we are planning to host a regional training project for trainers of young people in Bangladesh.

It was really fascinating to see the recent involvement of young people on climate change issues in Bangladesh. Though lots of work is yet to be completed the youth participation has been increased. Awareness has been raised as well. Various youth led clubs have been set-up in different parts of the country.

Relationships with government and civil society leaders have also been developed and the youth voice is being heard by them. Youth have become part of a government negotiation team and are building their capacity in terms of climate negotiations.

Existing youth organisations are trying to include climate change issues in their regular activities.

What are the challenges you have faced in your work and what has/hasn’t worked for you?

Lack of logistical and financial support of the youth based initiative at a country level is the major problem for a voluntary initiative aiming to run the movement. We don’t have any dedicated workforce yet for our activities. Everyone is working as a volunteer and they all have their own jobs and businesses too.

Some of our volunteers are students, and some are young professionals. It would help BYMC a lot if we could dedicate a few of them to take the lead and run the movement.

But the youth do have an interest to work on these issues which is why so many of them are working with us as volunteers and helping us to organise these various events.

Everyone including government ministers, bureaucrats, politicians and celebrities appreciate our efforts as youth. The government included me in their official climate change delegation last year and always provide me with the opportunities to develop my skills.

Sometimes civil society organisations provide the space to help us enhance our knowledge and their guidance helps to keep us on track. The Bangladeshi media also cover our activities very well and provide us with the space to disseminate our messages.

What are the impacts you are seeing in your country from climate change? 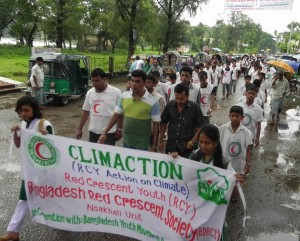 The BYMC collaborate with other groups such as the Noakhali Red Crescent Youth on the Rally and Human Chain to stop Climate Change (Source: BYMC)

We are facing the impacts of climate change in our everyday life. The rain patterns are changing, temperatures are rising and fisherman can’t go to sea so frequently to fish. Cyclones are coming very frequently and natural disasters are becoming a regular phenomena.

People are migrating from the southern part of the country to the Capital.

There should be no more negotiations over Mother Earth in 2050. Everyone will equally take care of the climate. The rain will come in the rainy season and the temperature will remain reasonable during the summer months. Ice will remain as ice.

Solid decisions are needed at Doha and onwards. It is really frustrating to see the tiny steps of global leaders to save the world. A legally binding treaty should be agreed by 2015 to ensure a soild plan of action from 2020.

What would help your group move forward in their work?

We need the motivation to help the vulnerable and affected people in my country. They are suffering in their daily lives due to climate change. People are losing their lives in natural disasters. Such impacts of climate change motivate our young people to get involved in the initiative and move forward with strong visions to ensure climate justice.

Why did you get involved in the group? What do you think youth groups bring to the climate/environmental debate?

I went to Mongla, a sub-district of the southern part of Bangladesh and near the Sundarban mangrove forest for an official visit just one week before the Cyclone Sidr.

The Sundarbans is one of the largest remaining mangrove forests in the world (Source: Nasa)

I went to the same area immediately after the Cyclone and saw the devastating effect of it on rural people. I met people who lost five to eight of their family members and heard how their daily lives are affected by climate change.

I realised how we are putting our lives in danger. I got involved in the climate movement as I feel we have to have a youth led platform to influence the leaders with our energy and spirit. I attended COP15 and a regional meeting on climate change and saw the power of the youth.

It motivated me to introduce the BYMC to mobilise the Bangladeshi youth and build national youth alliances to take actions on climate change.