New research from the Dutch arm of Deloitte suggests many businesses are unprepared or unable to implement a ‘zero impact’ growth strategy.

Only six companies out of the 65 interviewed for their 2012 report demonstrated the long-term strategic thinking Deloitte believes is necessary for business to survive in a world where ‘growth as usual’ is not an option anymore.

The research highlights the lack of consistent definitions and ambitions when it comes to ‘sustainability efforts’. A bewildering variety of emission reduction goals were cited by businesses in response to the report’s questions, with no clear strategy of how these could be achieved.

A corollory of this is Deloitte’s warning of an ‘implementation gap’ between proposed targets and actual achievements. The destination is often clear – the pathway to reach is less so.

The six best performing companies were Puma, Nike, Nestlé, Unilever, Natura and Ricoh, who all “defined a clear vision of what they attempt to achieve in a short to mid-term perspective”.

Puma’s CEO Jochen Zeitz was a vocal member of the business community at Rio+20, arguing for transparent environmental reporting and rigorous supply chain analysis. As RTCC reported earlier this month, attempts to add mandatory reporting to the final Rio+20 text were blocked by the US Chamber of Commerce and four other countries.

What does zero impact mean?

According to Deloitte, ‘Zero Impact Growth’ does not mean “zero growth, zero targets for everything, the ultimate target or a doom scenario’. Rather it should be seen as a guide and the basis for an overall action plan for companies who are aiming to develop a sustainable platform.

Eureka: A company that understands it has a problem, communicates but is yet to act.
Experimentation: Innovative measures are being taken, but no milestones have been set.
Enterprise: Short term targets have been set (2020) but almost nothing further.
Ecosystem: Measurable targets have been set, and the company has a mid-term vision, but they are yet to put everything into practice.
Economy: the full model has been accepted by the business along with a complete cultural change.

No-one made the ‘Economy’ rating – while the top six were all put in the ‘Ecosystem’ bracket. Enterprise was the largest category, hosting 45 of the 65 interviewed, including the report’s authors Deloitte.

You can see the full results below. Egyptian Consumer Services company Mansour are probably wishing they had not taken part after only making the ‘Eureka’ stage. 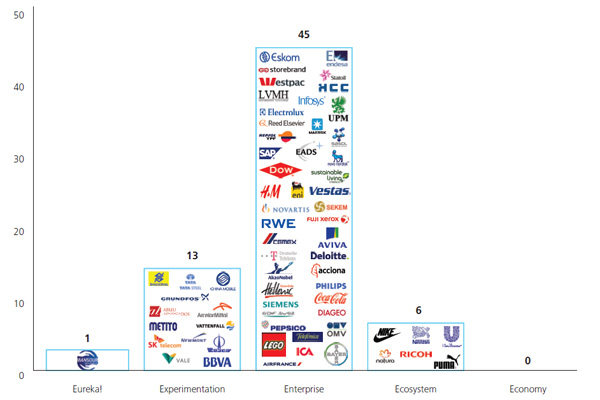 We’ll be exploring the subject of environmental reporting in greater detail from September. If you have any comments on that – or this new report – do get in touch via the comment form below.