Crowdfunding: A new source of finance for sustainability and renewable energy

A new craze is growing.

Around the world people are pledging money to help get projects they believe in off the ground, opening up a whole new funding channels for social enterprises and sustainable solutions – and it’s called crowdfunding.

A recent report by Massolution revealed that in 2011 that there were 452 crowdfunding platforms worldwide. They generated $1.5 billion for over 1 million campaigns – predicted to rise to $2.8 billion in 2012.

Crowdfunding describes the concept of people pooling their time, cooperation and most importantly money to support initiatives, led by others, get off the ground. It could be providing the capital for a new film, developing software and products or kick-starting a community energy scheme.

Crowdfunding puts the power back into the hands of consumers who can now help fund the projects and companies they want to do well (Source: masochismtango/Creative Commons)

In a world where banks are increasingly reluctant to offer loans to small and medium-sized businesses, it  also hands some power back into the hands of consumers who can help fund projects and companies they want to do well.

This is good news for renewable energy and other companies operating in the ‘green’ sector – offering a chance for new technologies to attract the finance they need to grow.

“For example on Kickstarter [a crowdfunding website] there is a project called Pebble Watch. They tried the traditional funding route and were rejected by venture capitalists – instead they went directly to the community and let the market speak for itself.”

Startsomethinggood.com is a platform which aims to fund initiatives for social good – whether that be non-profit or profit based projects – around the world.

Examples include Speech4Good to help people support people in need of speech therapy and the Do Good Bus aimed at encouraging young people to engage in proactive engagement with the local community.

Budak argues they provide a solid base not only to seek funding but to also build support and engagement in ideas and innovations.

“You might get 100 people who donate to your campaign and help get you started but those 100 people may also provide volunteer work, connections, people who want to be part of the venture as possible workers or interns.”

Crowdfunding is not a new concept to sustainability organisations. The 2009 climate change documentary Age of Stupid was funded by over 600 supporters. NGO 10:10’s Solar School project aims to aid schools to crowdfund for solar panels.

And earlier this year the Bicycle Academy, which runs bike-making workshops, sending the frames to Africa, raised £40,000 in just six days. It was Peoplefund.it’s first success – and it’s interesting to note that the sums involved are not vast (relatively speaking).

“It is relatively hard to get funds from foundations, from venture capitalists, until you have proven your model,” Budak says.

“So especially early on, the idea of connecting with your initial group of supporters, your peers, your tribes can be a great way of getting started and test your model, test your idea, see if it even works before you go from there”. 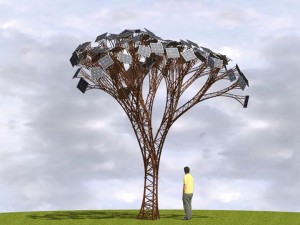 Another project which has seen success on Peoplefund.it is a joint venture between Demand Energy Equality and Edible Futures based in Bristol.

The project aims to make a solar tree which will power a rain-fed irrigation system at the Edible Futures’ nursery.

The pledged money will help fund workshops where the local community can learn to build solar PV panels – which will then form the leaves of the tree.

As well as raising the necessary finance, Daniel Quiggin from Demand Energy Equity told me Crowdfunding offered a great chance to raise the profile of their project.

“It forces you to tell people about the project – I suppose in a way it is killing two birds with one stone,” he said. “Also the whole project relies on funding of different sorts and it is about getting a diverse set of approaches so you are not always rely on applications. Otherwise you run out of funders.”

Peoplefund.it have teamed up with website energyshare.com who agreed to match any funds from other investors. £5,000 came from people’s pledges and another £5000 from energyshare.com.

Quiggin says it is a lot of work. He says the key to the projects success would be having an existing presence – particularly online and on Twitter – and getting the word out about your project.

He also admitted that while crowdfunding online offers the chance for a range of people to help fund your project, you are still fairly reliant on the people you know and your existing supporters.

Crowdfunding as an investment

The potential for clean energy projects to be crowdfunded is growing and companies including Solar Mosaic in the US and Abundance Generation in the UK are already successful applying the crowd funding model to such projects.

Many of these companies are starting to move the concept of crowdfunding away from charitable donations and more towards existing investment models.

Sometimes this works in the form of a loan. Whatever you have put in you will see returned once the project is up and running. Increasingly common are investments that offer a specified ‘rate of return’ on their input. 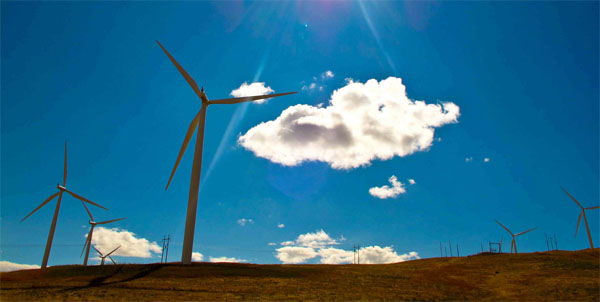 This is called ‘equity crowdfunding’, and it’s still technically illegal in the US, but a new piece of legislation – the Jumpstart our Business Startups or JOBS Act – could soon see it take off.

How does it work?

Users of the Abundance platform, for example, purchase debentures – essentially an IOU – and will receive a regular cash sum, your share of the money made from generating electricity.

Users can still invest as little as £5 in a project but now they will receive an average of 5-9% return on their investment.

“We call it ‘democratic finance’, says Bruce Davis, co-founder of Abundance Generation. “Enabling small investors, starting at as little as £5, to produce a regular return from the generation and sale of 100% green electricity from wind, solar, hydro and other renewable energy sources.”

And while investors can still invest small amounts, Baduk sees no reason why this funding model could not be scaled up massively.

“I think it is hugely scalable,” he says. “In our case the smallest campaign we had was $200 and the largest was $101,000 so it really is scalable. Kickstarter has had campaigns that have raised multiple millions of dollars so really more of an issue of the people running the venture, how they can tell their story. There are really no limitations on it.”

1) Which website? With hundreds of potential sites to choose from, it is important to find the right one for your project. While Kickstarter looks to fund creative projects, if your looking for funding for something more socially minded Startsomethinggood is more for you. There are also a wide range of energy specific sites out there, like Abundance Generation.

2) Clarity: People like to know exactly what they are paying for and what they are going to get in return for their cash. You should be clear about where your budget is going. And whether it is equity or donation funding with a few perks added in (some projects will offer goods and services for free) make sure you let people know what they can expect.

3) Goals: Many funding sites have the rule that if you don’t meet your full target in the designated time then you won’t get anything at all. Make sure that you set your target is realistic and find the balance between raising enough to while making sure you can meet your target.

4) Shout! While Crowdfunding websites are great, don’t forget about all the other ways to can get the word out. Demand Energy Equity found using Twitter and other social media platforms a huge help, while hitting the streets locally and raising awareness in person about your project will also help you drum up support.

5) Plan: With a time limit set on your crowdfunding, make sure you plan ahead. Analysis from Kickstarter shows that there are peaks in funders at the start and end of a funding period so make sure you have regular emails going out and plenty of action on Twitter planned for the space in between to keep the interest for your project going.