Brazil, China and India have won the dubious pleasure of becoming the first nations to directly contradict the pledges made at the Rio+20 summit last month. 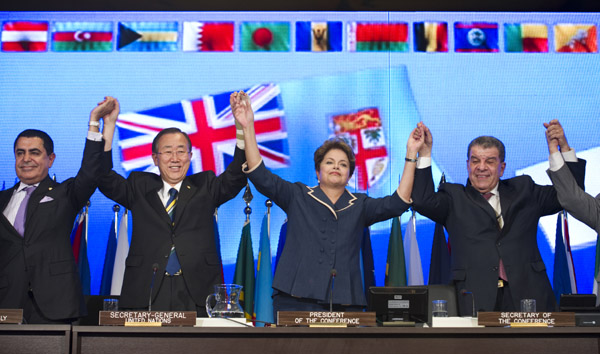 All 193 member states of the UN signed the declaration in Rio which included:

“We recognize that the phase-out of ozone-depleting substances is resulting in a rapid increase in the use and release of high global-warming potential hydrofluorocarbons (HFCs) to the environment. We support a gradual phase-down in the consumption and production of HFCs.”

However, an opportunity to do just this was passed up at a UNEP meeting in Bangkok on the Montreal Protocol, the legislation which banned CFCs in order to protect the Ozone layer.

The HFC family of chemicals replaced CFCs in most instances. Although better for the Ozone layer, they have a greater global warming effect than CO2 by a factor of 460-9100, depending on the particular HFC in question.

They are sometimes branded ‘super greenhouse gases’, and are used in refrigeration or air-conditioning units.

Micronesia, Mexico, Canada, the US and the UK have backed the proposals for a “phase-down”.

“Phasing out man-made HFCs and replacing them with climate-safe alternatives is the most significant, cost-effective and immediate global option available for mitigating GHG emissions,” said Clare Perry of the Environmental Investigation Association (EIA).

Parry’s colleague Samuel LaBudde added: “Brazil, China and India are the three countries that have been most active in blocking progress on HFCs at the UNFCCC, and are playing one Convention against the other at the expense of climate.”

The Montreal Protocol is regarded as the most successful piece of international environmental legislation, however, critics say its swift adoption was due to lobbying by major chemical firms lined up to make the replacement chemicals.

The EIA has called for a ban on the use of HFCs in commercial refrigeration across Europe.