Berkley Earth: Average temperature of the Earth’s land has risen by 1.5 °C over past 250 years

Planet Earth has warmed by 1.5C over the past 250 years and the warming ‘is due to humans’ according to a scientific study released this week.

It has concluded that the match between temperature records and historical carbon dioxide (Co2) records suggest the best explanation for ‘warming’ is human greenhouse gas emissions.

The Berkley Earth Surface Temperature project (Best) was set up to systematically address concerns sceptical scientists had over the causes of climate change.

Funding came from a variety of sources, including the Bill Gates Foundation and $150,000 from the Charles G Koch Charitable Foundation – set up by the billionaire coal magnate.

The study was led by Professor Richard Muller, who in the past described himself as a ‘climate sceptic’, but now says he has changed his mind as a result of these findings.

“Much to my surprise, by far the best match was to the record of atmospheric carbon dioxide, measured from atmospheric sample sand air trapped in polar ice,” he said.

While warning that on its own the data does not prove that CO2 levels are responsible for climate change, he added: “To be considered seriously, any alternative explanation must match the data at least as well as does carbon dioxide.”

Berkeley Earth say they have examined five times more records than have been used in previous analyses, with their data set stretching back to 1753, 100 years earlier than previous studies.

In November 2011 the Intergovernmental Panel on Climate Change (IPCC) released a report warning of the increased frequency of extreme weather events, while  the International Energy Agency (IEA) said governments had five years to act on emissions before the planet experienced ‘irreversible’ climate change. 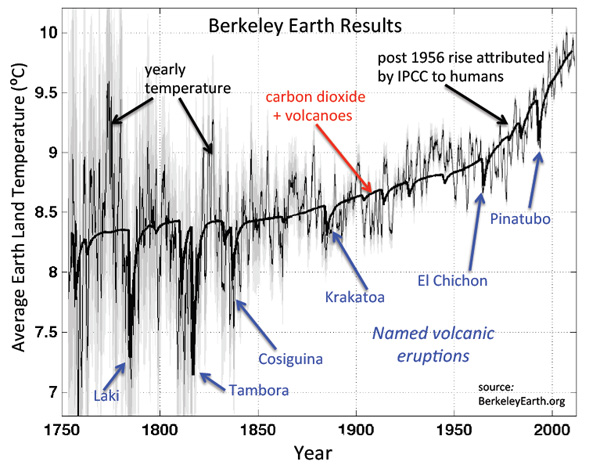 Figure: The temperature of the Earth’s land surface, as determined from over 36,000 temperature stations around the globe. The data is well fit by a simple model containing only known volcanic eruptions and carbon dioxide (dark line). No contribution from solar variability was necessary to make a good match. The rapid but short (decadal) variations are believed to be due to changes in ocean flows, such as El Nino and the Gulf Stream. (Graph & words: Berkley Earth)