The European Energy Commissioner Günter Oettinger has praised the US pursuit of unconventional fossil fuels in an apparent contradiction of EU policies currently under discussion including the much lauded 20:20:20 commitments.

The future of oil and gas sources with larger related CO2 emissions – such as tar sands and shale gas – are both under debate in Brussels with no indication so far of whether legislation will help or hinder the industries. 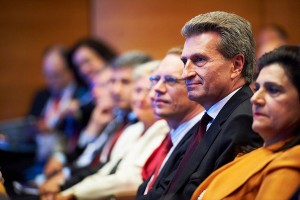 “In the US there’s a process to re-industrialise the country first by oil. Whoever rules in Washington, one gallon can’t be more than $4,” Oettinger was quoted by news agency EurActiv.

“They [the US] accept some risks with offshore drilling for ‘own sources’ in the Gulf of Mexico and they accept [tar] sand oils and others,” the commissioner said. Adding that by contrast in the EU, “we import oil and have high taxation”.

It is unclear whether he has spoken out of turn, or given a first indication of where EU policy is headed. Spokesperson’s for Commissioner Oettinger and EU climate chief Connie Hedegaard declined to comment.

The EU’s Fuel Quality Directive (FQD) seeks to restrict the emissions output of imported fuel sources, a decision that would render tar sands oil, of which there is huge reserves in Canada.

The EU also has three climate change and energy targets for 2020: 20% lower emissions, 20% better energy efficiency and to source 20% of its energy from renewable sources.

There are calls within the bloc to raise the emission cuts target to 30%, with Climate Commissioner Hedegaard and UK and German Energy Secretaries backing the move. Some member states, including coal-reliant Poland are opposed to the increase.

There are fears that Oettinger’s unguarded comments could indicate a broader sentiment within the 27-nation bloc.

“With BP facing a bill of at least $37 billion for the Deepwater Horizon spill, it is clear there are massive economic risks linked to these energy sources.

Extracting tar sands oil is an energy intensive process in itself. (Source: Shell)

Oettinger is understood to prefer countries to develop their own legislation in order to accelerate exploration.

Oettinger has suggested a fourth target, to increase industrialisation of Europe from 18% to 20% by 2020.

“Oettinger’s warm words on tar sands, offshore drilling and shale gas should be seen as part of his re-industrialisation strategy,” said Dr Harald Heubaum, an energy policy expert at the University of London. “Critics will call this a ploy to protect the interests of energy-intensive industries and water down climate commitments but supporters will point to the millions of jobs and tax revenue associated with industrial manufacturing.

“Pursuing a re-industrialisation strategy makes sense but it is questionable whether the main focus should be on fossil fuels.

“It’s problematic that at the first sign of trouble people question the low-carbon energy transition. Switching to renewables will take decades and it will be a tough process but the benefits of doing so will greatly outweigh today’s costs,” added Heubaum.

The comments are not the first of Oettinger’s to draw criticism. Discussing Greece’s economic plight earlier this month, he said: “It will never produce a car like the S-Class, but cheese and olives are not enough.”

Report: UK has fallen behind Europe and OECD on climate change action