Last week a ten year old boy was killed after a rocket was fired at a school in the Nigerian city of Jos.

Over one hundred more people have been killed in the past two weeks amid the ongoing ethno-religious violence in across Plateau State, of which Jos is the capital.

Responses and accusations have abounded over the political and cultural reasons for the violence but little attention is being paid to one of the chief catalysts behind the conflict: climate change.

Climate change is a driver of conflict.  Scarcity of resources, be they farmable land, water or livestock, is creating mass migrations and antagonising pre-existing tensions in a vicious circle. 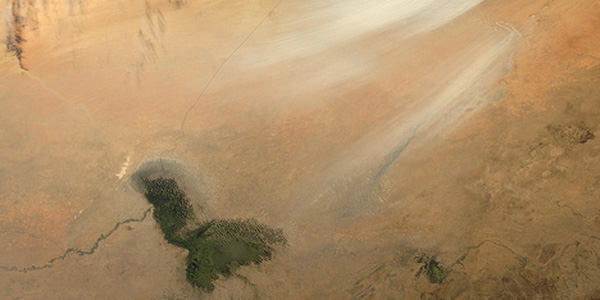 Once part of Lake Chad, the waters of the Bodele Depression are now disappearing © NASA

Plateau State is an extreme example of a wider problem sweeping across West Africa, from Lake Chad to the Atlantic, with particularly acute crises in Senegal, Guinea, Mali, Niger, Nigeria and Cameroon.  The southward expansion of the Sahara, described as the ‘pulse movement’ by archaeologists, has devastating socio-economic impacts for those living in its path.  As desertification intensifies these conflicts are likely to increase.

Eminent scientist, Sir Gordon Conway, the former chief scientific adviser to the British Department for International Development and the former President of the Rockefeller Foundation said that Africa is already warming up faster than the global average and that the continent will experience a greater amount of intense droughts, floods and storm surges as a result.

This highlights the tragedy of climate change facing Africa: despite being the least responsible for the greenhouse gas emissions, it stands to suffer the most.

While there are many facets to climate change in Africa, in the case of central Nigeria it is important to look at food, water and migration.  The environmental concerns in the Delta region and rising water levels across the south coast present challenges in themselves and would require an article in themselves.

Climate change threatens the ability of West Africa to compete in the global food system.  An increase in temperature will undoubtedly reduce yields in a region where the population is set to double within the next two decades.  Some projections claim that crop production will drop by 50% within the same timeframe as this population boom.

Nigerian food producers do not have the capacity to deal with such climate or population fluctuations.  Consequently food availability in many regions will be dangerously compromised leading to greater competition for resources.

In addition to the concerns of food production, the availability of water in the Sahel reached crisis levels several times in recent years.  In 2010 the region suffered a widespread famine, partially as a result of water shortages, and is now in the midst of an ongoing drought that has affected 18 million people.

Debates continue to rage over the future of Sahelian water as some project a decrease in rainfall of 40 percent in a region beset by drought already.  Others have posited that rainfall may increase the Sahel but that such a change would likely lead to an infestation of locusts the like of which have been destroying farmland in Mali and Niger in recent weeks.  When the rains do arrive the cities in the region are often unable to deal with them, evidenced by yesterday’s lethal flooding in Jos which has killed at least 35 people.

While future projections of waterfall vary, there is no doubting the present and impending threats from desertification.

Desertification is the most egregious form the temperature increase has taken as much of the Sahel is already suffering from climate-induced drought.  Approximately 1,350 square miles of Nigerian land turns to desert each year.  To put it in perspective, that is over twice the size of Greater London becoming impossible to farm each year.  This leads to both farmers and herdsmen having to abandon their homes to move to an area with more abundant resources.

Encroaching deserts do not merely mean water scarcity and a threat to food security but also mass migration.  The direct competition for resources has the potential to become more acute in several regions of Nigeria and beyond in West Africa. 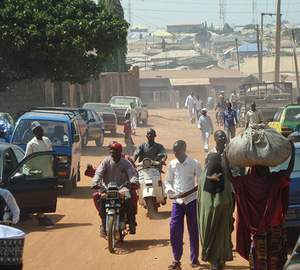 Thousands are fleeing the desert towards big cities, which are often unprepared to deal with refugees © Heinrich-Böll-Stiftung

An example would be the millions of Malians and Burkinabes in Cote d’Ivoire as a result of the Sahelian droughts of the 1970s and 1980s.  When the use of migrant labour lost its appeal to Cote d’Ivoire amidst the conflicts of the 1990s it set the course for outside interests to have a major impact on internal conflicts.  Migration disputes continue between the two countries to this day including a substantial impact upon the Ivorian crisis of 2010-11.

As the Sahel continues to dry up as a result of climate change, the land can no longer support the animal stocks required by herders to survive.  Since the only useful land to the herders is to the south of the desert, they move their herds towards the agricultural regions populated by sedentary farmers.  Naturally, the destruction of crops by the herds creates tensions between those moving the animals and those who struggle to grow enough food for themselves in an increasingly unforgiving climate.

The policy solutions up to this point have focused on short-term political factors leading to knee-jerk responses to the violence.  Communities in Ghana, Burkina Faso and Nigeria have expelled Fulani herders.  The existential threat is forcing the Fulani to fight back.

A refusal to acknowledge the role that climate change has played in the region has led to a failure of governance.  Such forced relocations are merely postponing the problem for a future government rather than trying to fix it.  In this sense the agricultural policies in Nigeria have become a microcosm for climate policy.

In the case of Nigeria poor governance as a result of political short-termism has exacerbated the food crisis, the catalyst for migration issues.  Until the 1970s agriculture made up 60% of Nigeria’s GDP.  Since then technological stagnation, myopic policies and corruption have turned the country into a net importer at a cost of $150 billion each year.  The $500 million allocated to agriculture in the 2012 budget could be enough to facilitate the needs of the country if spent wisely.  Some have even argued that Nigeria has the capacity to be the breadbasket for the whole of West Africa.

Political short-termism has blighted Plateau State both in terms of local politicians and the global response to climate change.  The sudden explosions of conflict in the region have been predicted for decades.  Despite the upsurge in brutal violence, the policies remain largely the same.

With roughly 40% of Africa now affected by desertification, solutions will have to come soon.  One such solution is the ‘Green Wall’, a wall of trees 4,300 miles long and 9 miles wide stretching across the African continent from Senegal to Djibouti.  The idea has been advocated by West African leaders for over 30 years but has only now been realised.

Erecting walls has rarely provided a long-term solution to conflict.  It is unlikely to do so for climate change.

Jack Hamilton is the editor at InPEC, an online magazine specialising in international politics, energy, and culture.  He is a professional writer and researcher and has published several papers on topics ranging from post-conflict reconciliation in Northern Ireland to health policies in West Africa.  He can be followed on Twitter @jmhamilton

Profile: Nigeria’s youth climate campaigners talk to RTCC about their hopes and dreams

Investment: What difference can private sector finance make in Nigeria?