Urban forests play a vital role in regulating a city’s environment as well as improving the social well-being of residents.

The benefits from trees removing pollution and carbon from urban atmospheres could be worth millions of pounds, while ‘green walls’ in cities could cut pollution by 30%, according to research conducted by the University of Birmingham.

A new art installation in London ahead of the Olympic Games attempts to highlight these benefits.

The ‘Breathing Trees’ display is based in Russell Square – one of they city’s best known public areas – and is intended to change a typical city park into a living, breathing organism using light and sound installations. 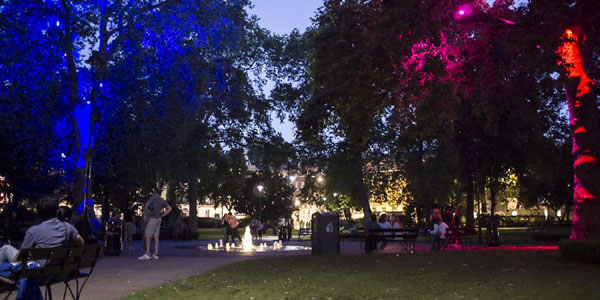 The 'Breathing Trees' installation aims to turn Russell Square's canopy into the lungs of the city (Source: Camden Council)

The artwork is a collaboration between Camden Borough Council and digital art company Creatmosphere. It uses a series of multi-colour LED lights positioned within two of the square’s largest trees to visually transform the canopy into the ‘lungs’ of the city, rising and falling to the sound of breathing and a beating heart.

London’s focus on sustainability ahead of the Olympics Games has been praised by NGOs such as WWF and Bioregional.

And Councillor Phil Jones, Cabinet member for sustainability at Camden said the art would help reinforce their efforts to remind the public of how vital trees are to urban areas.

“Breathing trees in not just a visual audio spectacle…it will reinforce our message that our natural environment must be protected,” he said.

“Without protecting our wonderful natural resources we will be unable to tackle the many environmental issues in the years to come.”

Benefits of the urban forest

With 80% of the UK population living in cities, ‘urban forests’ play a vital role in both improving air quality in built-up environments and also improving quality of life for their residents.

The environmental benefits of trees are widely known. They reduce the ‘urban heat island effect’, soaking up dust and pollution from the air while improving soil quality and storing carbon.

A recent report from the Trees and Design Action Group found that in the town of Torbay, in the South West of England, the benefits of air pollution removal and the carbon sequestrian of local trees alone were worth £6.4 million a year.

And yet much work still needs to be done – because the total coverage of woodland and forests in the UK currently compensates for less than 1% of the greenhouse gas emissions of the country. 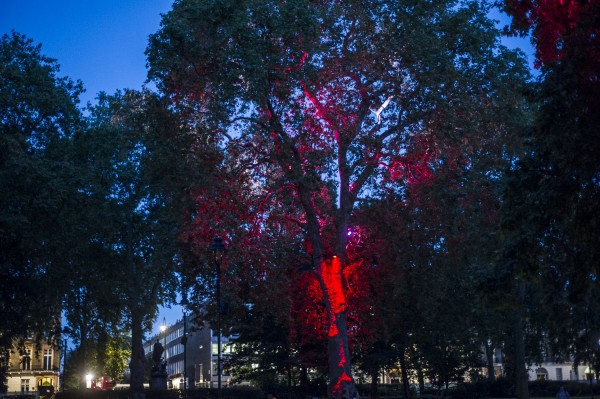 The lighting moves to the sounds of breathing and a heart beating (Source: Camden Council)

Other environmental benefits from urban forests include providing shade for building in the summer – saving money on energy costs – reducing noise pollution by absorbing and deflecting sounds, increasing biodiversity and reducing the effects of flash flooding.

Sue Holden, Woodland Trust Chief Executive said: “Trees are a vital part of the urban infrastructure and offer a variety of benefits – shade in summer, shelter from rain and wind; they help keep the air clean and breathable, support wildlife and add value to the culture and economy of our town and cities.

“The recently published report from the Independent Panel on Forestry clearly demonstrates the need to expand tree and woodland cover both in rural and urban areas, so now is the perfect time to work together to protect the urban trees we have and plant more so they survive and deliver these and many more benefits in the future.” 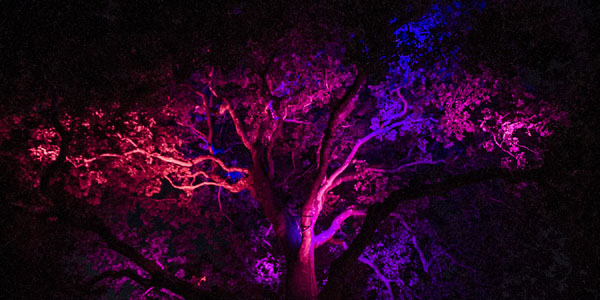 The display will run all week to the opening of the Olympic Games (Source: Camden Council)

Other benefits from the Independent Panel’s report include:

– Increasing the value of a property in the urban environment by 7-15%.

– Benefits to health from forestry worth an estimated £2.1 billion.

– Evidence suggests people living near green spaces, are 40% less likely to be overweight or obese.

– 0.9 tonnes of CO2 could be save per cubic meter by replacing construction materials with wood.

Forests also help create a sense of identity for an urban area – and have even been known to reduce crime rates – providing focal points to the often monotony of built-up urban environments.

Camden Country Council hope their latest light display will help further distinguish Russell Square as one of London’s iconic spots – both for the people who live there and those visiting for the London 2012 Games.

The light display will be shown every night this week (23-27 July) between 10pm and midnight.