1735 Olympic Torch passes the RTCC offices on Regent Street in the centre of London. Cue pandamonium as hundreds people sprint from their offices to catch a glimpse of the Olympic flame 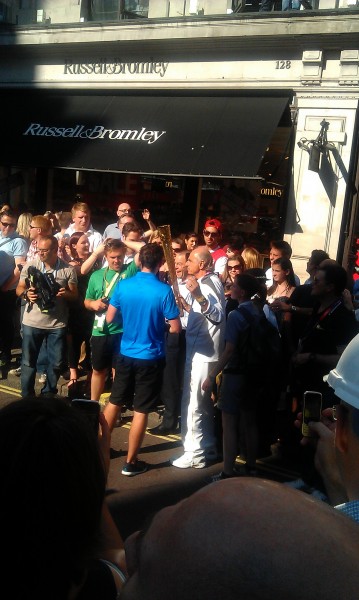 Here’s the lucky torchbearer – a man called Mario – waiting to have his moment of glory. We won’t even mention all the emissions from that torch, the six buses and legion of police outriders that this procession must have emitted!

1700 Coal production increased by 6.6% globally in 2011, reported the IEA. That is the twelfth consecutive year of growth.

Peru is set to get its first validated project under the REDD carbon offset project. The project will use revenue generated from the sale of carbon credits to prevent illegal deforestation on over 290,000 hectares of Peruvian rainforest.

1500 The USA has opened its first commercial, grid-connected tidal energy project off the coast of the north-eastern state of Maine.

1400 An art installation running all this week at London’s Russell square – ahead of the London 2012 Olympics – aims to highlight the importance of urban forests, both for a city’s environment and its residents social well-being.

1300 The UK Department for Energy and Climate have released their energy stats. Onshore wind and solar PV are both on the up and there has been little change on the country’s coal use.

1230 US Congressman Randy Forbes has said Barack Obama has let the Chinese “get their body in the door” of the North American energy market by blocking the KeystoneXL pipeline. The project will connect Canadian tar sands oil to refineries in Texas, but Forbes says delays have left Canada looking to the east for customers.

1030 Climate change is viewed as an increasingly real and serious risk by global business, according to a new report. The ‘Global Investor Survey on Climate Change’, conducted by the consultancy firm Mercer, interviewed 42 asset owners and 51 asset managers who were involved with funds with a combined value of over $12 Trillion. Over half of the owners interviewed had embarked on climate change risk assessmens, while a quarter had changed their investment strategy based on those findings.

1000 The carbon footprint of the entire London Olympic Games could be wiped out if steelmaker ArcelorMittal – an official supporter of the event – cancelled just 3% of its excess carbon emission permits, according to green groups.

0900 At least 70% of the decline in sea ice around the Arctic could be due to human-induced climate change, according to a new study.

The research used several computer based simulations on how the climate around the Arctic may have fluctuated without the input of greenhouse gas emissions, found the human impact could even be as high as 95%.

A dramatic gash that has been compared in size to the Grand Canyon has been discovered hidden beneath Antarctica’s ice sheet. Named the Ferrigno Rift – after the glacier that fills it – its existence could ‘profoundly affect ice loss’ warn the researchers who found it.

Strong expansion of nuclear power as a carbon-free energy is expected to continue in Asia despite the Fukushima accident in Japan, according to a report from the UN nuclear body and the Organisation for Economic Cooperation and Development (OECD).

Shell’s plans to drill exploratory wells in remote Arctic water off Alaska are being further hampered by its failure to secure the regulatory approvals needed.

The company, which had hoped to use this year’s brief, ice-free season to drill the wells, had already faced three-week delays to their work because of lingering sea ice.

Less than day after Osborne hands half a billion quid of our money to Centrica and gas lobby, Centrica announce they’re making record profit

More on yesterday’s story on the “extreme melt” in Greenland…

Piece by me on the Greenland melt. Scientist says last time CO2 reached this level, there was no ice sheet. bit.ly/OYJPtu #climate