Beijing’s poor air pollution record preceded it in the run-up to the 2008 Olympics, but a new report suggests changes during the Games slashed the city’s carbon output. 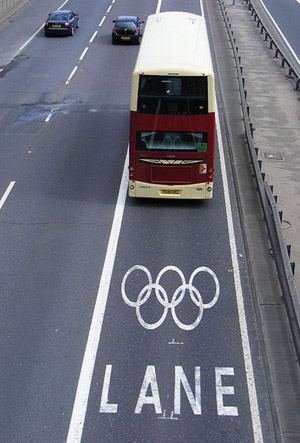 A designated Olympics only lane in London, part of the city's transport strategy for the event. (Source: Flickr/Sludgegulper)

It’s a timely publication as research into London’s transport plan for the 2012 Olympics said it was expected that air pollution limits would be exceeded.

Today’s report from the National Center for Atmospheric Research (NCAR) offers clear evidence that should those levels become unacceptable – there is a tried and tested method to reduce them – stop the traffic.

The scientists found that restrictions on vehicles during the Beijing Games cut emissions in the city by 20%.

Reporting from Beijing in 2008, the BBC’s Gordon Farquhar was one of many who observed just how bad the pollution was in the Chinese capital.

“All the talk has been about human rights but there has been a growing realisation that Beijing has a smog problem. People are beginning to come to terms with the fact it could be a major issue,” he said.

Olympic chief Jacques Rogge even suggested delaying some events in order to beat the smog – but instead the Beijing authorities took drastic action to reduce the grey-ish shroud hanging over the city.

Their first move was to close down heavily polluting factories in an effort to improve the situation, but the real root cause of the problem was from the city’s gridlocked streets.

It has now been shown that the subsequent changes to transport patterns they implemented – a topic covered by RTCC recently –  can make a huge contribution to cutting emissions and combating climate change.

In 2004 there were just over 2 million cars registered in Beijing, by 2008 this figure had nearly doubled. Policies included limiting car use to alternate days. Number-plates ending in odd numbers were allowed on the roads on odd-number calendar days and even-ending number-plates were permitted on even calendar days.

The move was a clear success – cutting Co2 emissions from 96,000 to 24,000  metric tons. But while this policy worked in China, more liberal governments struggle to enforce such far-reaching policies – and so far the organisers in London have adopted a fairly conservative policy over road closures – preferring to highlight public transport alternatives.

London has established high speed rail links from the city centre to the Olympic Park, built a cable car across the river in East London and established Olympic-only traffic lanes in an effort to keep traffic moving. The latter triggered a “go-slow” protest by taxi drivers over Tower Bridge the day before the lanes closed to regular traffic.

That said – many argue that the current traffic restrictions and transport investments implemented in London ahead of the Games could have longer-lasting effects.

A recent report by Global Action Plan, an environmental behaviour change charity based in the UK capital, believes that with good planning, resident’s Olympic back-up travel plans could become a permanent carbon-saving fixture.

One of the UK’s leading newsreaders – Channel 4’s John Snow – has blogged today on the new lane rules and the effect they have had on drivers coming into London. He argues they are ‘bliss’ and a model for other British cities.

“It happens that this has been brought about by the installation of Olympic lanes. But it could just as easily have been a day when for the sheer easing of the urban traffic madness a completely new approach was adopted,” he writes.

“Many drivers have decided not to come near Central London in a car. They must be encouraged to develop this habit.

“The Olympic Lanes across London send a powerful signal across all Britain’s cities about the art of the possible.”

“The Olympics present a once in a lifetime opportunity to boost productivity, cut costs and reduce damage to the environment,” said Trewin Restorick, CEO, Global Action Plan.

“UK businesses spend £17.5 billion per year on business travel, and that’s escalating all the time, as is the carbon this results in. There are better ways of doing business that can boost productivity, motivate employees and lower carbon emissions.

“It’s a win-win situation for both employers and employees, changing work and travel patterns for good, with the potential to leave a meaningful green Olympic legacy,” he added.

So what options are available to residents? The one word on the front cover of the 2012 Transport Report is ‘Move’. While some Londoners may have considered moving out of town, there are less drastic options available, many of which can be continued all year round, not just during the games.

1. Work from home one day a week. Shutting the office down one day a week save money, cuts carbon and boosts morale according to GAP. The right IT infrastructure is needed to support this however, as are the right employees…

2. Flexible working hours. This can help employees avoid the daily rush and spend more time in the office being productive than sitting in stationary traffic or negotiating the swarms in the train station.

3. Online meetings. Travel during working hours, not just commuting adds to costs, lowers output and of course, emits carbon. With the right tools, online collaboration can be a rich and effective resource. But…

4. Incentivise staff to travel less. Without incentives change will be slow. Microsoft’s departmental carbon budgets are an extreme example, small prizes and friendly competition can work too. The Lloyds Banking Group has banned travel one day a month forcing staff experiment with the alternatives.

5. Change from the top. Senior staff have to lead the way. Employees lower down the chain are unlikely to change their habits if their superiors are not leading the way.