An extreme melt event in Greenland occurred in mid-July causing 97% of the ice sheet’s surface to start melting, according to NASA.

The combination of three data sets from NASA and the Indian Space Research Organisation (ISRO) showed an unusually large area of ice had begun to thaw. 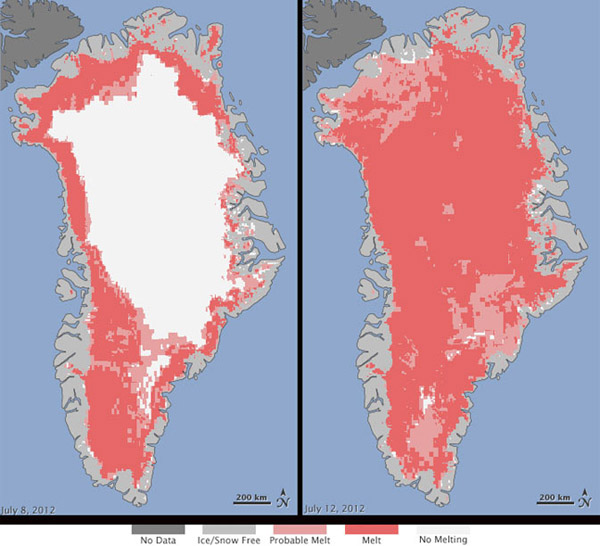 The images above show the extent of melting on July 8, 2012 (on the left) with white areas representing ice that is not undergoing melting. The shades of pink indicate areas that are or are probably melting.

On July 12, a series of unusually warm ridges of air, or heat domes, that have been centred over Greenland since May, contributed to 97% of the surface ice melting.

Son Nghiem of NASA’s Jet Propulsion Laboratory was analyzing radar data from the ISRO Oceansat-2 satellite last week when he noticed that most of Greenland appeared to have undergone surface melting on July 12.

“This was so extraordinary that at first I questioned the result: was this real or was it due to a data error?” he said.

Even the highest parts of the island, two miles above sea level at the Summit Station, underwent melting, an occurrence shown to happen every 150 years by ice core data.

“Melting events of this type occur about once every 150 years on average. With the last one happening in 1889, this event is right on time,” said Lora Koenig, a Goddard Space Flight Centre glaciologist and a member of the research team analyzing the satellite data.

“But if we continue to observe melting events like this in upcoming years, it will be worrisome.”

Researchers have been monitoring the ice sheets of Greenland and Antarctica for decades for indicators of human induced climate change.

On average in the summer, about half of the surface of Greenland’s ice sheet naturally melts. Much of the meltwater usually ‘refreezes’ to the ice sheet before it has the chance to reach the coast and make a contribution to rising sea levels.

The team say they are uncertain as to whether this will be the case this time round.