In just five days time visitors from around the world will be descending on London’s iconic Olympic Park for the start of the 2012 Games.

And despite a recent barrage of negative headlines over the weather and security, the actual construction has been something of a success story, especially for sustainable architecture.

The area looked very different four years ago – less a park and more a mixture of tattered industrial buildings and toxic wastelands. Constructed on 246 hectares of once heavily contaminated industrial land, one of the first challenges that faced the Olympic Park organisers was reclaiming the site.

98% of the materials from the site’s demolished buildings, including glue factories, a chemical works and an oil refinery, were re-used and 700,000 cubic metres of soil, enough to fill two billion cans of coke, were cleansed to be re-claimed.

“You could have just knocked it all down, scrapped it all off and sent it off to landfill,” said Julian Sutherland, Design Director at Aitkins, the engineering and design consultancy working on the Olympics.

“That would have been the base case in the absence of trying to do something more sustainable…That was not something we wanted to do. A lot of the sustainability features around re-use and re-cycling have actually been more cost effective and have certainly had a lower impact on local communities.”

With a large amount of the Games’ total carbon emissions coming from the building and operation of the arenas, both in London and across the UK, they have the potential to make or break Games’ sustainability strategy.

So why are the organisers so confident they can deliver a truly ‘green’ Games? I’ve had a look at some venues to figure out why London 2012 could be the the greenest Games to date.

With a capacity of 80,000, the Olympic Stadium will host the Games’ opening and closing ceremonies, and all of the athletics events – notably the men’s 100m final.

The Olympic stadium is the lightest stadium built for a Games to date (Source: ODA)

Unique features: The Olympic Stadium mixes elements of temporary and permanent into its design. The lower tiers of seating – the permanent elements – sit snugly within a bowl in the ground, minimising the need for external construction materials.

The bowl was made by excavating 800,000 tonnes of soil – the majority of which were cleaned and re-used across the Olympic Park.

Around 10,000 tonnes of steel were used to build the arena – making it the lightest Olympic Stadium to date – and the top ring of the venue used surplus gas pipes.

Legacy: While the Olympic Stadium is designed for the temporary elements to be dismantled after the Games, what is to be done with the permanent structure is still undecided. Two local football clubs – Leyton Orient FC and West Ham United – are keen to take ownership of the ground.

The Aquatics Centre is the second largest venue on the Olympic Park. Designed by the award winning and hugely controversial architect Zaha Hadid, the pools contain over 10 million litres of water. 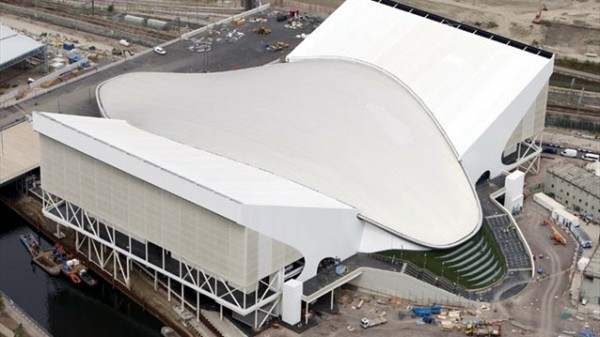 The Aquatics Center's two swimming pools and diving pool will be filled with 10 million litres of water (Source: ODA)

Unique features: The Centre’s ceiling is made up of 30,000 sections of sustainably sourced Red Lauro timber, while the wave-shaped roof includes a robust aluminium covering – half of which is recycled.

The temporary seating either side of the centre roof is made from steel and phthalate-free (the chemical which gives plastic it rigidity) PVC wrap.

Low-flow showers and hand basin taps, and low-flush toilets will help the building save 29% on water over its 25-year lifespan. Another 3% could be saved through recycling filtered backwash water for toilets and urinals.

Legacy: Once the Games conclude the venue will downsize from holding 17,500 people to 2,500 and provide swimming pools and a diving pool for community and event uses.

The Velodrome's roof uses a cable-net design which reduces the amount of material needed (Source: ODA)

Unique features: The design of the Velodrome incorporates natural ventilation and light, entirely removing the need of air- conditioning (not that this British summer needs air-conditioning) and limiting energy needs for lighting.

The most striking feature is the use of a cable-net roof design – ‘strung’ with steel cables like a tennis racket – meaning conventional steel beams were not required. It had the added bonus of saving 20 weeks in construction time.

The wood used to clad the building and the track is certified by the Forest Stewardship Council – guaranteeing that the trees harvested are replaced or regenerated naturally.

Legacy: After the Games the Velodrome will form part of a new VeloPark for use by the local community, clubs and elite athletes.

Many Olympic venues are temporary structures – both whole arenas and added seating to permanent stadiums. A lot of the sustainability focus was placed on how to design these structures with the least impact.

Sutherland says while all additional seating used typical standards, meaning it could fit into the current market for temporary seating after the Games, purpose-built stadiums such as the Basketball Arena will be re-used for events elsewhere. 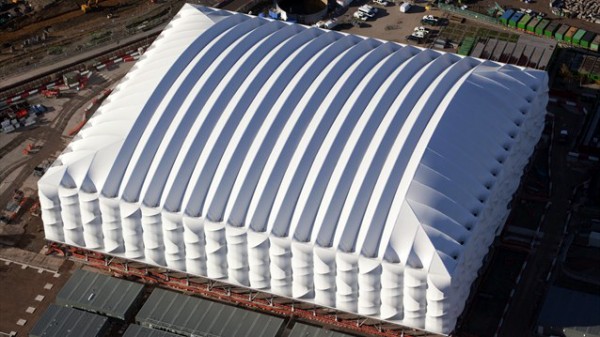 The Basketball arena will be the most used temporary structure of the Games (Source: ODA)

Unique features: The venue’s frame is made up of 1,000 tonnes of steel and is covered in 20,000 square meters of a recyclable white PVC fabric. The covering will also function as a canvas for lighting displays during the games.

Legacy: Once the arena has been taken down, various parts can be relocated and reused. Where these temporary structures could be used again is still to be decided.

“It is still and ongoing discussion really about what events around the world might be able to take something like Basketball for instance. Can they use that in Glasgow or does it need to go over to Rio or something?” said Sutherland.

“They are big buildings, quite specific. They will have a use. I guess it is not always easy to be very clear at the beginning where they might go to, until people see them in use and begin to think about a potential reuse you never quite know.”

As well as purpose built arenas, many existing aareas in London have been transformed – offering a cheaper and less energy intensive alternative to building new stadia from scratch.

Horse Guards Parade: Another temporary arena, set on the Prime Minister’s doorstep, Horse Guards Parade has been turned into London’s very own ‘beach’. 5,000 tonnes of sand have been brought onto the site from a quarry in Godstone, Surrey. After the Games’ the site will be returned to its original state.

Hyde Park: Hyde Park will showcase both the Marathon Swimming and the Triathlon swimming. This will take place on The Serpentine. Temporary seating will be needed for the venue, and the course will be marked out across the park.

London 2012 say they have worked with the Royal Parks to minimise the impacts of visitors on the park.

The architects and engineers have used innovative and creative design features to ensure the Olympic buildings not only look the part for the 2012 Games, but stand up to the rigid sustainability measures put in place.

Coming in under budget, on time and with higher carbon emission savings than expected, the stadiums could be a lasting sustainability example for future construction projects in the UK and globally.

The real test of the stadiums now will be what happens to them after the Games are over, ensuring that both the temporary and permanent structures continue to set the bar for sustainability.

Last but not least – spectators have to get to all these arenas in order to enjoy the sport. Let’s hear it for the organisers who have sent an all-day and all-zone travelcard out with every ticket, ensuring there is no excuse for not leaving the car at home.