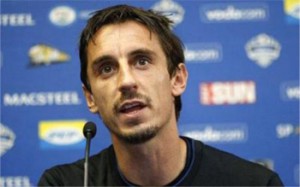 Neville has joined forces with Dale Vince, owner of energy company Ecotricity and chairman of Conference side Forest Green Rovers to promote the concept of Sustainability in Sport.

“We’re surrounded by this topic every day – energy shortage, energy crisis. Every time you put your petrol in your car the person in the street feels it,” Neville said.

“How do you make that sexy? It’s difficult, but sport is something that people feel they can follow, listen to – think of the viewing figures – into the tens of millions.

“We’ve seen it in other social areas, think of the work that has been done in fair trade, racism, sexism in regards to issues that sport has led the way in and sport has stamped them out.

The pair have organised a match which will see Forest Green Rovers play a Manchester United XI in a pre-season match on August 5. Proceeds will go towards the newly launched Sustainability in Sport foundation.

Friday 20 July: How do we make green sexy?

VIDEO: Gary Neville and Dale Vince explain why they are so passionate about sustainability