The weak outcome of the Rio+20 negotiations highlights how business now leads governments on sustainable development, according to a new report by KPMG.

With the outcome of the negotiations roundly criticised, the consultancy group claims that the pledges made by business will become a key driver to for future action on a range of issues from energy efficiency to providing micro-insurance for rural farmers to protect crops from natural and climate change induced disasters. 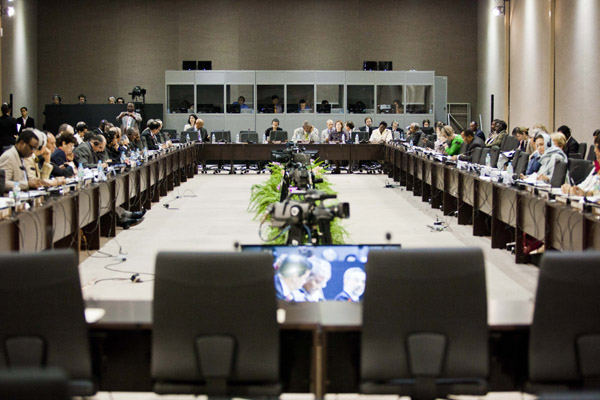 Despite not having a seat at the negotiating table in Rio, KPMG says business made the biggest impact. (Source: UN/Guilherme Costa)

“The political world – based around the formal conference and the outcome document – ground to a halt in a sea of nothingness,” writes Yvo de Boer, KPMG’s special global advisor on climate change. “But the business community was full of energy and enthusiasm and broke away from the formal process in a way that was liberating and forward-looking.”

De Boer, the former head of the UN’s climate change agency the UNFCCC, says that the private sector has lobbied for policy support to no avail and companies must now press ahead.

“Many have recognized that sustainability megaforces such as climate change, water scarcity, food security and urbanization are not waiting for the politicians to make up their minds. Instead, businesses have taken action on their own,” he says in the reports foreword.

De Boer issued three recommendations for business in the wake of Rio+20’s conclusion:

The green economy is not going away
“It is developing from the bottom up rather than being imposed from the top down. Ignore it at your peril.”

Fragmented actions mean its harder to track progress
“…it is in your interest to stay connected. Things may move more quickly than you expect.”

Be bold and think about opportunity not just risk
“There is early mover advantage for companies that refuse to be constrained by the lack of policy framework.”

Hitachi: Mitigate 100 million tonnes of CO2 a year by improving efficiency of its products

Bank of America: $50bn for energy efficiency over the next 10 years

Enterprise Rent-a-Car: Plant 50 million trees in the next 50 years

GDF Suez: €100m investment fund for renewable energy, 10% of which will be reserved for social business

Will the billions needed to fight climate change be found in Doha? 12/07/2012