It’s not a great time in history to be a Canadian climate activist.

Painted as the baddies of the international negotiation process at the Durban Climate Summit, you could be fooled into thinking that Canada is a country full of climate sceptics and oil companies.

The country made few friends when following the conference it withdrew from the Kyoto Protocol, the only legal commitment of greenhouse gas emissions.

And with heavy investment in the extraction of tar sands oil, considered the worst of the worst when it comes to fossil fuels, the country is further alienated itself from environmentalists – both within the country and outside it.

However, there is another side to the story in Canada. One of creativity and the mobilisation of the country’s youth. 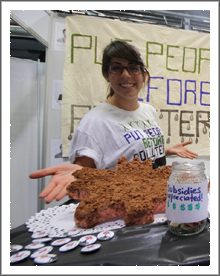 In Durban the Canadian youth played a key role in reminding others that there is a still a strong green element within the country and also in holding their own delegation account for its actions.

Amara Possian from the Canadian Youth Climate Coalition has been telling RTCC a little bit more about what action they have been taking over the past year.

The Canadian Youth Climate Coalition is a coalition of young people and organisations from around the country who use participatory education along with creative campaigns and actions to push our government to act on climate change.

A lot of our work aims to build grassroots power across the country in order to directly challenge climate injustice.

Our main focus right now is organising PowerShift in collaboration with about a dozen other organisations. PowerShift, which is coming up in late October, is a gathering of 1500 young people to network, gain skills for mobilisation, and strategise to keep building the climate justice movement.

The summit is also tied to a campaign to end $1.4 billion in fossil fuel subsidies in Canada. In early June, we launched the campaign through a public theatre action and by presenting a motion to end subsidies to the All Party Climate Change Caucus on Parliament Hill. We’re hoping that Members of Parliament will present our bill to abolish subsidies during the fall sitting of Parliament.

Since 2010, we’ve also run Wings of Change, a for-youth-by-youth popular education program for high school students. The interactive workshop links climate science to practical, community-based alternatives and strategies for collective action. We also try to help participants find their political voices through creative expression. At the end of the workshop, they use words and pictures to show their sustainable vision for Canada on pieces of cloth that become the feathers of hundreds of giant bird puppets that we’ll be using for a creative action.

Every year since the 2006 COP12 negotiations in Nairobi, we’ve sent a delegation of young people to the UNFCCC. The Canadian Youth Delegation tracks policy developments at the negotiations, plans actions that highlight the role that Canada is playing at the negotiations, and reports back home through a daily newsletter, radio podcast, and blogs.

The Canadian Youth Delegation joined forces with the Indigenous Environmental Network in Durban to protest against Tar Sands (Source: CYD_DJC/Flickr)

We also have an exciting upcoming campaign!

In September, we’re going to be launching the Clean Energy Campuses project with the goals of helping university students understand the impacts of the tar sands as well as the tar sands’ relationship with our post secondary institutions.

We’ve helped build capacity in the movement by giving a whole lot of youth the skills and knowledge they need to become the change our generation needs to see in the world.

Our national director and I actually just returned from the Earth Summit where, during the Youth Blast conference leading up to Rio+20, we gave a few workshops on creative action and movement strategy, as well as corporate influence in the UN process.

Last summer, we ran a series of six four-day regional Power Summer camps across Canada that provided 150 youth with the tools and training they needed to build effective campaigns in their communities. Our workshops ranged from creative non-violent action, to popular education, media and messaging, and anti-oppression and facilitation. 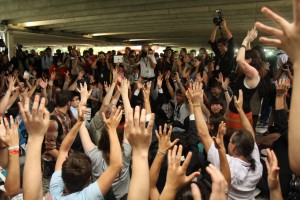 In Rio they joined with other youth and civil society groups from around the world for the people's plenary and walk out (Source: PowerShiftCanada2012/Flickr)

In the past year, we’ve also reached almost 3000 youth through Wings of Change. It’s really inspiring to see what comes out of the workshops. After our workshops, students from Halifax organised a field trip to their provincial legislature to deliver letters to their Members of Legislative Assembly, and workshop participants from a conference in Ontario returned to their schools and began plans for solar panel installation, urban farms, and high temperature composters.

Throughout a lot of our projects, we’ve also effectively used the media as well as creative actions as tools to highlight our government’s cozy relationship with the fossil fuel industry. One of my favourites was our “Buy Back Our Future” bakesale at COP17 in Durban last year where the Canadian Youth Delegation held a bake sale to try to buy back our future from fossil fuel corporations, as youth back home mailed their spare change into the Prime Minister’s Office.

What are the challenges you have faced in your work and what has or hasn’t worked for you?

I think we’re particularly good at turning challenges and barriers into our strengths.  There’s a very simple root cause to the lack of action on climate change: addressing it would be pretty bad for business for the small group of fossil fuel corporations who are currently making large profits at the expense of the planet.

We don’t have the same amount of money, access to world leaders, or resources as this big polluter lobby that dictates our government’s environmental policy so we’ve had to get creative.

Our strength lies in our numbers and our creativity, and where the Canadian Youth Climate Coalition has been successful, it has been because we’ve run campaigns that go beyond the conventional means of registering dissent and making change.

When six Canadian youth stood up during Environment Minister Peter Kent’s plenary address at COP17 and turned their backs on Canada, a number of organisations and individuals ranging from [scientist and environmentalist] David Suzuki and [Greenpeace International Director] Kumi Naidoo to the Canadian Union of Postal Workers wrote a letter supporting their actions and calling on the Canadian government to people before polluters.

We regularly work with other environmental organisations and where possible, like on the bill to end fossil fuel subsidies, we work with Members of Parliament. 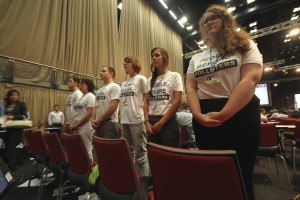 The Canadian Youth Delegation turned their backs on Canada's negotiators at COP17 in Durban (Source: CYD_DJC/Flickr)

We’ve also seen support spread across the country and are really excited to see new climate justice initiatives springing up in places like St. John’s and Saskatoon, places where we had little to no presence before.

Our indigenous people and northern communities are already dealing with particularly devastating impacts of climate change. Because of the melting permafrost, I have friends in the north whose porches are cracking off of their houses.

Changes in their environment mean a loss of culture and identity because they can no longer carry on with their traditional hunting practices.

A group we’ve worked pretty closely with, the Nanisiniq: Arviat History Project, has a really good series of short documentaries about the impacts of climate change on the Inuit in Nunavut which is worth checking out.

And of course everyone across the country is feeling the impacts of changing weather patterns. I was home in Toronto visiting family this weekend and my grandmother told me she hasn’t been able to go outside because it’s too hot. On my way back to Montreal today, my train was delayed a couple of hours because there was a flash flood and the train station flooded in a matter of minutes.

My vision for 2050 is energy democracy. Imagine if we were able to make our own energy instead of relying on oil and coal companies, the same companies who are standing in the way of real solutions because they won’t profit from stopping climate change. A combination of small scale, renewable energy production and conservations systems could make energy affordable and accessible for everyone.

And we already have these solutions – they exist. So we have to ask ourselves why they haven’t been at the forefront of what is discussed at UNFCCC conferences.

Governments and large fossil fuel corporations aren’t going to make this happen because they have way too much invested in the status quo. Energy democracy needs to be brought about by a people-powered movement.

In Doha and in the lead up to 2015, we need to use our creativity and our numbers to make it impossible for global leaders to continue putting polluters before people.

I know you probably hear this a lot but funding. It’s remarkable what we’ve been able to do with little to no resources. Aside from the occasional short-term summer student contract, our only paid staff is the National Director.

We would be able to accomplish so much more and plan long term if we were able to pay our organisers and fund our campaigns.  It doesn’t help that the federal government has been targeting the funding and charitable status of environmental groups for the past year or so.

On the political level, we have to think about what’s moving us backwards before we talk about moving forward. Our government currently gives $1.4 billion in subsidies to fossil fuels companies – how can we expect them to do anything meaningful when it comes to the environment when they’re funding the problem?

Our allies around the world can also support us by putting pressure on Canada and preventing pipeline projects or policies that would expand or export the Tar Sands.

Why did you get involved in the group? What do you think a youth group’s role is in the climate/environmental agenda? 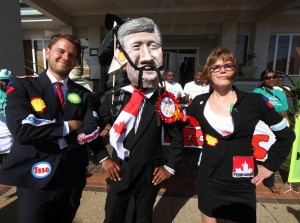 "We need to get creative with our tactics, think outside the box, and put our numbers to use" (Source: CYD_DJC/Flickr)

I’ve been involved in environmental initiatives for a long time but I got involved in the climate movement in February 2009 when I went to the PowerShift U.S. conference in Washington, D.C.

PowerShift gave me the tools I needed to start turning the anger and despair I felt in the face of climate injustice into something productive and powerful.

I came back to Canada and worked with a bunch of amazing organisers to organise our first PowerShift conference that October and I’ve organized with a range of groups ever since – Climate Justice Montreal, the Canadian Youth Climate Coalition, and the Canadian Youth Delegation to UNFCCC negotiations.

I think our ability to turn challenges and barriers into our strengths applies here too.

We can’t just rely on conventional means of creating change like writing letters or signing petitions.

When thinking about how to actually create change and sustainable solutions, we need to get creative with our tactics, think outside the box, and put our numbers to use!

Video: Toby Divine from the Canadian Youth Delegation spoke to RTCC while in Durban…

– The Nigerian Youth Climate Coalition talks about building bridges between governments and youth ahead of COP18.