The German Chancellor Angela Merkel pulled no punches when she addressed some of the world’s leading environment and climate ministers today.

Speaking at the opening of the Petersberg Climate Dialogue in Berlin, co-hosted by the German Government and COP18/CMP8 Presidency of Qatar, Merkel stressed that all states had to make an effort to cut their carbon emissions – not just states with an ‘historical responsibility’. 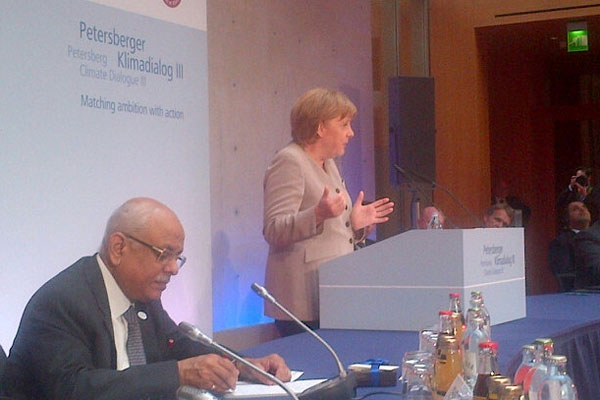 She called for the climate talks to move on from old and bitter arguments over equity, and form a common position ahead of the UN climate talks in Doha.

The message was clear – we all move forward together or face the consequences of a +2C world.

Merkel also stressed the importance of the European Union to show leadership and adopt a second commitment period to the Kyoto Protocol.

“If we continue with business of usual – there could be terrible consequences. We have to change something – if we don’t do anything we run the risk of devastating consequences”, she said.

“We need to resolve the second Kyoto period. Kyoto 2 will be a litmus test – industrialised counties should be under no illusions.

“If we are leaning back saying we don’t need to do anything, then the emerging economies will say – if they are not taking this seriously they cannot expect us to move.

“We must be clear and serious – particularly when we are talking about growth.”

Merkel was backed on the issue of equity and Common But Differentiated Responsibility (CBDR) by the European Climate Commissioner Connie Hedegaard, who tweeted: “CBDR OK principle, interpretation must be adjusted: Developed must do most but others must also be accountable to stay below 2°C”

The public element of the talks were largely a series of announcements – with states competing to outdo each other with green initiatives and suggestions for cooperation.

The COP18/CMP8 President, Deputy Prime Minister Abdulla bin Hamad Al-Attiyah, did suggest he will be a capable guardian of the annual climate talks, which he will host in Doha.

Al-Attiyah ensured today’s talks were conducted in good spirits, despite stopping proceedings at one point to lecture the assembled ministers about the danger of ‘big boys’ and their insistence on measuring everything by per-capita emissions.

“We are cast as the bad boys by the big boys…per-capita is the biggest trick in the world,” he said. No prizes for guessing which small Middle East state has the world’s highest per capita emissions.

The final day of talks resumes tomorrow, with the ambition gap, between the targets set so far and what actually needs to be done to meet the 2°C target, high on the agenda.

RELATED LINKS: What did the 2012 UNFCCC Bonn climate talks achieve?