By 2020 there should be (a bare minimum) of $100bn of climate finance flowing into projects to slash emissions in developing countries and to protect the most vulnerable nations from the effects of climate change.

For the first three days of this week, 140 diplomats, business leaders and civil society representatives met in Bonn to take the next necessary steps towards achieving this idealistic vision of widespread, practical action.

The next tangible progress will come at the next round of the UN climate change negotiations in Doha in November. 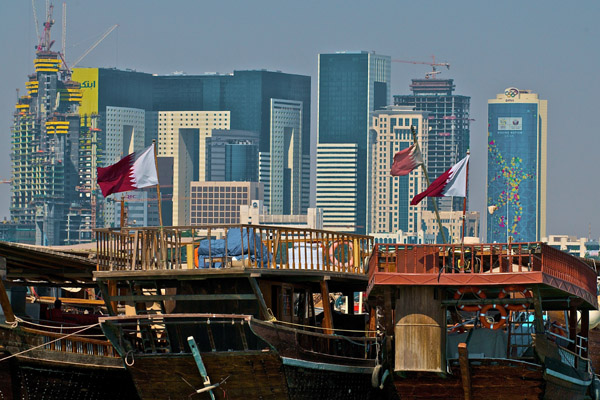 The next UN climate change talks in Doha will settle many outstanding issues regarding climate finance. (Source: Flickr/Larry Johnson)

So what clues did the Bonn workshop provide about what might be achieved in Doha?

The simple answer is that the no single source of finance, public or private, can deliver the speed and scale of change required to restrict warming to 2°C and stop climate impacts taking the wind out the sails of development in the world’s poorest nations.

The second less obvious reason is that the delicate process of agreeing cuts to greenhouse gas emissions (GHGs) for all nations (the Durban Platform), hinges on developing nations having the confidence that sufficient support for their efforts in this regard will be in place. Without it they simply won’t sign any legally binding agreement to cut emissions.

All eyes are now turned to Doha where more work will be done to kick-start the Green Climate Fund (GCF), the mechanism that, once finished, will process the billions of dollars needed.

“We want to see $10-15 billion pledged to the GCF in Doha to see it through 2013-2015,” says Steve Herz, senior attorney with the Sierra Club and a co-chair of the Climate Action Network’s (CAN) finance group. Herz suggests a 50:50 split between money allocated for mitigating and adapting to climate change. This might not be so straightforward.

Increasing the proportion of private sector money could have a direct effect on the mitigation/adaptation split.

“The private sector will be more interested in investing in emerging markets and middle income countries than in the least developed countries. On the mitigation side that’s not such a problem because that’s where the GHG emissions are [in the emerging markets]. The bigger problem is on the adaptation side, where the poorest countries are in the worst position to respond to climate impacts.”

Getting the private sector involved at a larger scale is a challenge in itself.

Erik Jan Stork, Senior Sustainability Specialist at APG Asset Management who is also on the steering committee of the Institutional Investors Group on Climate Change (IIGCC) says things are improving in the renewable energy sector but plenty of work remains.

APG looks after more than $300bn of assets and is already making serious sustainable investments.

At the workshop Stork reiterated the importance of a strong and sustained price on carbon in order for finance to flow to the Clean Development Mechanism (CDM), the system for industrialised countries to establish projects overseas to offset emissions at home. A low carbon price means lower returns and less incentive for businesses to take part.

Money may talk, but it appears that not enough talking goes on between different parties involved in climate financing.

Anecdotes of miscommunication, idling donations and a lack of attribution were abundant in Bonn. Solving this problem will be a key issue in Doha. Tracking, verifying and monitoring the movement and utilisation of funds is a complex issue. Finding a trusted, independent and universal way to do this, that is also simple and paperwork-light, is no easy task.

The UNFCCC could well have already begun preparing to provide such a role. It’s portal for fast start finance, the funding system for 2010-2012, tracks the donations pledged and those received.

Better communication could stop money filling between the cracks, speed up implementation and remove opportunities for corruption.

Are new sources of cash dead in the water at Doha? 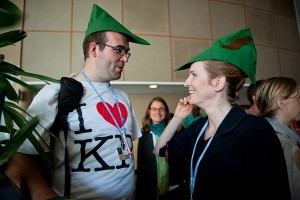 Support for a Robin Hood Tax is widespread, whether it can be part of the UNFCCC process however, is doubtful. (Source: Flickr/RobinHoodTax)

The campaign to end fossil fuel subsidies has near unanimous support from civil society but turning these subsidies off like a tap could have negative consequences for some, as was pointed out in Bonn.

However, Herz points out that when they were first discussed by the G20 in Pittsburgh in 2009, this was well understood and targeting the rich was part of the theory.

“If you were mindless about it there could be some negative social consequences but the way fossil fuel subsidies work generally, is that they benefit the rich most. They use the most fossil fuels, so the idea would be that subsidies would be narrowly tailored to benefit the poor,” says Herz pointing out that ending subsidies on Kerosene, which millions of people still rely on for lighting and cooking, would be unwise.

The financial transaction tax (FTT) or the Robin Hood tax as it commonly referred to, would see a small percentage tax placed on financial trades. Nine of the EU’s 27 members have agreed to apply one. Getting 195 parties to sign-up to one is “impossible” as one delegate said during the work shop.

Herz thinks there could be a way to get all parties to agree.

The added benefit of fossil fuel subsidies and charging a levy on emissions from shipping and aviation however, is that both of these would also ultimately lead to cuts in emissions. A FTT cannot claim to do the same.

One issue surrounding the GCF that is almost certain to be decided in Doha, is the location of the headquarters for the new organisation. Six countries including South Korea and Germany (which Herz describes as both very keen) are in the running.

However, Herz’ outside bet is Poland.

“Poland is a huge roadblock within the EU, maybe there is scope for a trade-off?”

Wherever the fund ends up, there are more complicated, and more pressing, issues to be addressed in Doha. With the fund’s overarching structure largely settled, there will be time later for the flesh to be added to the bones.

The sentiments of most can be expressed through a Twitter hashtag that was prominent during the workshop’s duration: #fillthefund.