Climate change is increasing the chances of extreme weather events, according to a new report from scientists at the UK Met Office and the USA’s National Oceanographic and Atmospheric Administration (NOAA).

The study, Explaining Extreme Events of 2011 from a Climate Perspective reviews a year marked by floods in Thailand, droughts in Texas and East Africa, wildfires in Australia and an unusually balmy British winter.

It makes a direct link between these ‘extreme weather events’ and man-made climate change.

– Texas had its hottest and driest summer since 1895. This was 20 times more likely to have taken place given the changing climate than in the 1960s.

At the same time the report found that heat-trapping greenhouse gases such as carbon dioxide, methane, and nitrous oxide, continued to rise. The global average of Co2 exceeded 390 parts per million (ppm) for the first time since instrumental records began – a 2.10 ppm increase on 2010. 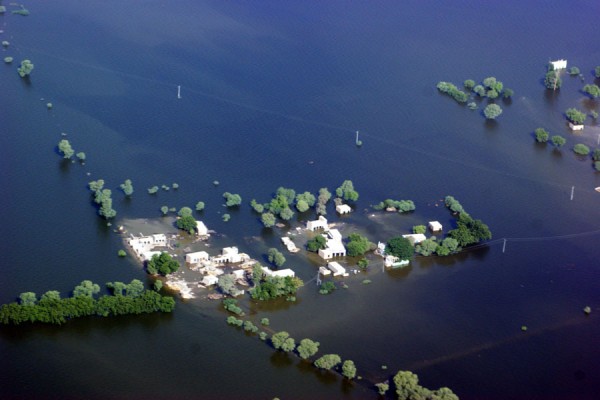 “2011 will be remembered as a year of extreme events, both in the United States and around the world,” Deputy NOAA Administrator Kathryn Sullivan said.

“Every weather event that happens now takes place in the context of a changing global environment. This annual report provides scientists and citizens alike with an analysis of what has happened so we can all prepare for what is to come.”

This latest research is a companion piece to The State of the Climate in 2011, where scientists found Arctic sea ice extent was below average for all of 2011 and has been since June 2001.

But the report also stresses that we should not attribute all extreme weather events to climate change – using the 2011 Thailand floods – which saw large areas of Bangkok swamped – as an example.

It states that: ‘attribution of the impacts of weather-related events to climate variability and change requires careful consideration of possible confounding factors not relating to climate’.

The study suggests the levels of rain that caused the Thai flooding ‘were not unusual’, attributing the disaster to other factors including the conversion of agricultural land to industrial purposes and reservoir operation policies.

Dr Peter Stott, Head of Climate Monitoring and Attribution at the UK’s Met Office and one of the editors of the report, said: “The research here pushes the boundaries of attribution science in quantifying, so soon after the weather events in question, how climate change has altered the odds of their occurrence.

“While we didn’t find evidence that climate change has affected the odds of all the extreme weather events we looked at, we did see that some events were significantly more likely. Overall we’re seeing that human influence is having a marked impact on some types of extreme weather.”

RTCC VIDEO: WMO chief Michael Jarraud on why he’s optimistic policymakers are listening to scientists about the dangers of climate change