The UN climate change talks are not supposed to be about us versus them, given that everyone wants the same end result.

However true this may be, there is one inescapable divide that was prominent during today’s final session of the UNFCCC Long Term Finance workshop: the haves and the have nots.

In UN speak they are called donors and recipients, the countries paying into climate finance funds and those receiving funding.

The current system of “fast start finance” agreed in Copenhagen is in its third and final year. The $30bn injection of funding is the pre-cursor to the Green Climate Fund (GCF), the long-term set-up that will administer flows of cash in the direction that climate impacts and mitigation opportunities dictate. 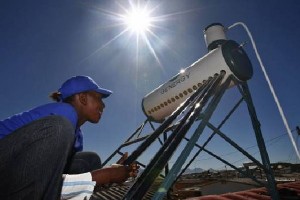 There were some awkward moments during today’s session and delegates candidly discussed the (sometimes embarrassing) logistical challenges they faced during the fast start finance era.

Colombia’s Isobel Cavalier described how her nation was unaware that it was registered to receive funding for certain projects and the effect this had on the countries that were stumping up the cash.

“Donors are unnerved and exasperated because we don’t know that we are listed for funding. Sometimes we know nothing about it. We need a systematic way of working so we all, donors and recipients, have the same information,” she said.

Jessica Brown from the US State Department warned of the consequences that this can have on budgets.

“It’s counter productive when governments don’t acknowledge our support and makes it harder for us to go back to our own governments to get more support,” she said.

“Why aren’t countries aware of the fast start finance that we’re delivering? Maybe it’s the lag between the budget and the projects’ timetables? Maybe we need to be realistic about the level of bureaucracy that this money goes through,” she said adding that a move away from the “us versus them” mentality and toward more partnerships might improve the situation.

The miscommunication is not just across international boundaries however.

Fred Onduri from the Ugandan delegation described an exchange with an Australian Minister about funding. The Minister claimed that the country had already invested in Uganda leaving Onduri slightly baffled. When he returned to Kampala and spoke with the Finance Ministry, a fast start finance contribution from Canberra had indeed been made. His own department simply hadn’t been told.

Japanese negotiator Junya Nakano acknowledged that this was a far from ideal situation for donors either, suggesting climate change projects should be part of mainstream development plans to cut the risk of allocations going AWOL between departments.

While there are still clearly plenty of elements of the process requiring further elaboration, there were warnings that perfecting the diplomatic details could get in the way of action on the ground.

“We should try to waste less time on not very helpful elaboration. Donors can be more creative and effective and try to deliver results rather than focusing too hard on workshops and awareness building and so on,” said Marina Olshanskaya, United Nations Development Programme (UNDP).

Representatives of France and the Philippines both said there needed to be more attention on defining specific legal terms such as “new and additional” (the notion that climate finance is not simply rediverted, already allocated aid). The EC and the OECD both said it would be better to concentrate on actions and leave the finer detail to later, a sentiment echoed by India’s Rajestree Ray.

“We need to start the initial capitalisation [of the GCF] now. We don’t have to wait for the details to be finished, enough has been done to start putting money into it,” said Ray.

The workshop concluded with a tourism style promo for Cape Town, which was revealed as the destination of the next workshop on Long Term Finance. If delegates are serious about cutting some of the red tape that underpins the complex financial processes, they might just find the spare time for a little tourism of their own.