Who pays for climate change: What we learnt after day one of the UNFCCC finance workshop

In UN jargon it is known as Long Term Finance.

What it really means is the money that will be used from 2012 onwards, when the current package expires, to fund cuts in global greenhouse gases and projects to help countries adapt to the new challenges thrown out by climate change. It is targeting a tally of $100bn annually by 2020.

It sounds fairly straightforward, just fundraising on a massive scale. 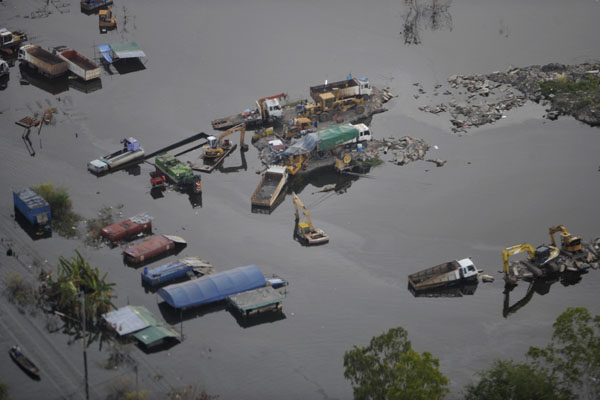 But when you start to look closer, the complexity is enormous. How much money is needed? Does damage from an intense storm season qualify for funding? Who should distribute it, governments, development banks, the UN?

Most importantly, who should pay for what and where will the money come from? New taxes? A carbon price? Diverted fossil fuel subsidies?

Through the UN climate talks, nations have set the target of raising $100bn annually for the Green Climate Fund (GCF). Negotiations on how to get the GCF up and running in time for 2020 are picking up pace with the first workshop on Long Term Finance taking place in Bonn this week

He called for a strong price on carbon, which would mean big polluting industries paying a set figure for each ton of carbon that they emit.

“The world will need to find a way to overcome the US and a few other countries resistance to carbon pricing,” said Sachs adding that that price needed to be between $30-50 per ton. The price on the EU-wide carbon trading scheme is around $10.

@JeffDSachs People are terrified by what is happening to climate. If politicians lead, will find that public already ahead of them#LTFchat

Manuel Montes from the developing world think tank the South Centre ran through some of the estimates of how much money is needed. Two things became clear, the figures involved are mind-boggling and the estimates disparate.

Looking through a number of reports from academics and institutions such as the IEA and the World Bank, a “ball-park” figure of $1.6 trillion emerges.

$46 billion: The cost of the Thailand floods in 2011. There is debate as to whether extreme weather events should be counted as climate finance

100,000: The number of people that would need to be relocated in the Caribbean is sea level rises 1m

$1.6 trillion: The rough estimate for the annual cost of adapting to climate change

1800%: The growth in investment in renewable energy in Africa in the last seven years

$3.4 billion: The amount of money for climate change mitigation and adaptation distributed by the Global Environmental Facility since 1992

The response from delegates to the morning session was varied with numerous concerns raised.

Surya Sethi, a former Indian climate change negotiator, said he was concerned with the responsibility for climate finance being entrusted to the markets – not a new sentiment but one that has gained traction in UNFCCC talks given the series of banking disasters over the past five years.

“The banks have shown that they cannot stably supply mortgages. They can manipulate the Libor rate with an exchange of emails. We must be mad, or smoking something we shouldn’t be to turn to the markets,” he said.

Another Indian delegate said she did not believe that carbon trading was a fair response for the international climate change talks to pursue, calling requests for developing countries to contribute to climate finance as “a double blow”.

Salman from Saudi Arabia (which despite sitting on the world’s second largest oil reserves is classed as a developing country) gave a telling indication of the global south’s intentions and desires:

A Ugandan audience member described how concerned he was that climate finance was being viewed as a business opportunity.

“For us this is not about chasing a few percent of profit. This is about our livelihoods, our survival and social development.”

Sticking to the script

Ultimately, those with an attachment to a country delegation have stuck to the same lines that we see at the negotiations. Developing nations called for assistance to adapt, both in terms of cash and technology. Developed countries meanwhile, have been championing the role of the private sector.

The sensitive subject of Common But Differentiated Responsibilities (CBDR), which is written into the UNFCCC’s guiding principles, is at the heart of finance debates. With the current funding mechanism ending next year, the inescapable issue of the rich/poor divide will have to be overcome or the costs could be borne by all.

Tomorrow the focus is on Sources of Climate Finance – be it development banks, new policies or more involvement from the private sector. It is the key issue in this vital debate.

You can follow what is discussed on our live blog and also via a UNFCCC webcast.