After Rio+20 stalemate and impasse at UNFCCC talks is it time to focus locally on climate action?

The old adage often cited by people within the environmental movement is “think globally, act locally”.

This essentially means changing our own lives – the things we have complete control over – so we can put a dent, however small, in the problems we are facing globally.

And if this local action was collective, and the dent a little bigger, all the better.

Over the past year, there has been plenty of the ‘thinking globally’ side of the argument going on.

Media reports, environmental campaigns and political rhetoric have all been largely focused on the global conferences taking place – particularly with the annual UNFCCC COP meeting being accompanied by the Rio+20 Earth Summit this year.

As we came away from UNFCCC’s Climate Talks in Durban, there was a lot of talk about the process having failed but soon our focus was back on Rio+20 – the 20 year anniversary of the original Earth Summit, hailed almost as the summit to end all summits. 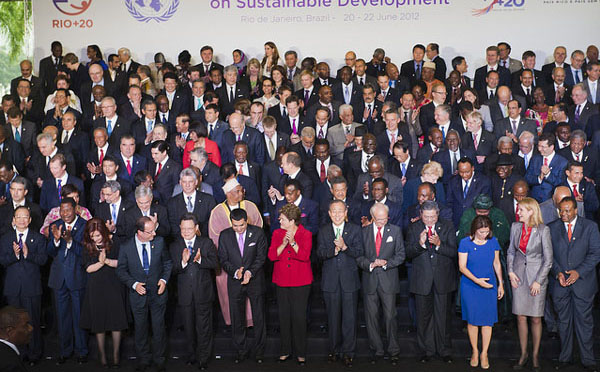 Following the outcome of Rio+20, many are ready to find a new pathway with less focus on the global negotiations (Source: UN Photo)

Six months later as we walk away from Rio+20, once again the talk of the process having failed grew louder, and the spotlight fell on the local.

As NGOs and Civil Society groups alike despaired over the outcomes decided in Rio and the lack of political will even to debate the final text, many begun to call on groups around the world to mobilise, to push for action and to start the transition they believe politicians continue to shy away from.

This is not a new idea. In fact it is already going on and has been for years.

Whether through a responsibility for the environment, a concern about vanishing resources or a financial crisis which has left many looking for a more economical way to live, groups and communities around the world are already looking for and moving towards a new way of life.

One such example is the Transition Network. Born in 2005, in Totnes, Devon, UK, the Network aims to tackle two linked problems – peak oil and climate change.

In just seven years it has grown from one town in Devon to more than 900 registered groups across five continents and 34 countries.

“It is only locally that things actually happen isn’t it,” said Paula Orr from Transition Town Peckham. “They don’t happen at the national level. Have you ever had a party at national level? No.

“Things happen in your local neighbourhood. It is when you try to do things there that you realise what works and what doesn’t.”

I met the Transition Town Peckham group, when they hosted a showing of the Network’s latest film Transition 2:0. A mix of core members of the group and some newcomers who had turned up to see what it was all about, the meeting was a real insight into the work being done up and down the country, and across the world on local action.

Often the problem seems so large, it is hard to know where to start, and it can be disheartening to think that your own actions are just a drop in the ocean – just one of the 7 billion people on the planet.

But sat in the backroom of a local pub in Peckham, watching Transition 2:0 and discussing it afterwards with the group you could not help but feel a little inspired.

Not only inspiring a sense of purpose in the task ahead, the film also showed a sense of community and collaboration which can often be lacking – particularly living in a city as big as London.

And it is true that local solutions work for local people. Much of the arguments in Rio+20 were over how to create one global agreement which would cover so many different countries – all with different needs and priorities.

Take the diversity of the Transition Network as an example.

If two communities living side-by-side can not agree on what the area needs, how can all countries come up with an overarching agreement? The task soon looks as though it is doomed to failure.

“At the bottom end of it you have to come up with a project which is actually going to start working to empower people,” says Yvonne Killen, also from Transition Peckham. “And it is not just empowering people for the sake of it. It is seeing what people are interested in, and working with that.

“It can actually be quite a slow process and you might not get everybody running at you.”

Transition Town Peckham’s groups are made up of a mix of people, with specialisms around energy and community gardening.

Feeding back up to the global

The group therefore focuses on these areas. But as they welcome newcomers they are keen to hear where they can fit into the group and what new areas they could work within.

The groups do not work in isolation though. With communities like these springing up all over the country, partnerships are created and lessons can be learnt and shared. Transition Town Peckham works closely with neighbouring Transition Town Brixton – who with the Brixton Pound and a new energy project underway has a lot of experience to share.

These groups then meet, partner and learn from the other projects in London, who then learn from others around the country and so the process continues.

And across the world, similar groups are forming, or those who already existed are coming under the umbrella of the Transition Network, joining together.

It is here where their work could begin to feed back into the global side of the argument.

Working individually, as part of a household or even a small group can feel isolating, but by coming together as a much larger group, with pockets all over the world, you suddenly feel part of a movement. You start to feel empowered.

Coming together as a group can help to make those involved in local action feel empowered (Source: Transition Town Tooting)

Then collectively could we begin to have an impact on the larger debate at national or even international level?

“Locally, that’s the only action we have,” said William Waterhouse, a first time attendee at Transition Town Peckham. “The government aren’t going to do it. They are going to shuffle papers. They are going to look to where the movement is. It is important that people are there with their opinions to hand over and to kind of pressurise them.