Transition 2:0 – A story of community and climate resilience in a time of global inaction

Fruit and vegetables growing in a tube station in Kilburn, an ex-double glazing sales man going door-to-door in Moss Side, a young boy selling salad on the side of the road in Pittsburgh and elderly people teaching the young to plough in a small village in Italy.

Each of these stories seem so small, even irrelevant, on their own but together they are part of a much larger story.

One of a movement which is getting people and communities to re-think and re-design the way they live.

This is the story of Transition 2:0 – and a new film by that name has just been launched to celebrate this quintessential grassroots movement.

Transition Tooting staged a Carnival of Waste down the high street to celebrate their achievements (Source: Transition Town Tooting)

Born in 2005, in Totnes in Devon, the Transition Network (or Transition Towns) now consists of 900 registered initiatives across the UK and Europe, North and South America, Australia, New Zealand and Asia.

It was founded to tackle the twin problems of peak oil and climate change.

The transition movement has now sprung up across towns, cities, boroughs, universities and streets – both in rural and urban areas.

Transition 2:0, the sequel to the movement’s first film released in 2010 which introduced the project to the world, showcases the work of these communities from growing food everywhere and anywhere, to printing their own money and setting up community energy schemes.

The film is a tool-kit – a beginner’s guide to setting up a transition group.

The film’s strength is in its gathering of diverse stories of community action from across the globe. It takes you on a journey through what Rob Hopkins, founder of Transition Towns, calls ‘the four stages of transition’.

At stage one you see Joel Prittie, former-salesman going door-to-door in Manchester’s Moss Side – an area with the reputation as the Bronx of Britain – in attempt to set up a local transition group.

Prittie tells you that for the 1100 plus doors he has knocked on he now has a mailing list 400 strong and a core group to get the movement going.

From the basics of community growing, you are taken deeper into the world of Transition to examples in Yorkshire, where groups have taken over their local fruit and veg store as a co-operative and turning it back into the hub of the community.

From here you go to Brixton, where the local currency – the Brixton Pound – has now gone electronic and allows people to invest their hard-earned cash into local salesman and businesses, and then across to India, where 400 vegetable gardens has been created in Tamil Nadu.

As well a visual ‘tool-kit’ for the movement, the film also aims to inspire.

Notably some of the communities who have been hit by the shocks of the natural world are included. Following the 2011 earthquakes in New Zealand, community ‘time banks’ brought people together in an attempt to help aid and speed up the areas recovery. 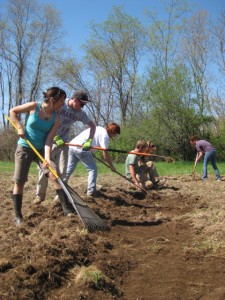 The movement has spread across the world, and groups are springing up across the US (Source: Transitionus/Flickr)

And in Japan, one community member explains how before the Tsunami he felt like Transition made sense for the community – but since the events of March 2011, he now knows just how vital it could be.

And back in the UK, the example of Transition Town Tooting in South London acts as a celebration of the movement, as the groups moves through the boroughs streets in their Carnival of Waste.

One destination – many roads

While this is just one film, it depicts a movement which has become so vast and has so many different stories to tell.

In some ways, the success of the Transition Network has been down to this variety. Local groups are not tied down to a set of rules or activities they must keep to and each group can develop in its own time and manner.

While both situated in South London, both being poorer boroughs of the city and both having multi-cultural communities, many people would expect them to want similar things.

But what works in one Transition Town has not necessarily led to a success in the other and while the two groups work closely together, they are at the same time very different groups. Rather than being a negative, this diversity is celebrated with the Network.

While there is a growing disillusionment over the global progress on climate change, particularly since the Rio+20 Earth Summit, and calls are growing for more localised action, Transition provides an example of how this action is in fact already happening and has been for years.

But it is not all shining lights and celebration.

Essentially the movement will be as successful as the community involved allows it. Where communities are engaged and empowered by the process, a striving and long lasting Transition Town is usually found – one which take root in the community, benefits from it and is beneficial to it.

Meanwhile those which find people un-engaged will soon find themselves disheartened and struggling.

Perhaps the biggest lesson I took from the film though was that where the opportunities are there, communities are often willing to engage. They just need a little help.

While many people believe this sense of togetherness is no longer present in modern society, Transition Towns seems to be a great example of people being willing if given that opportunity. 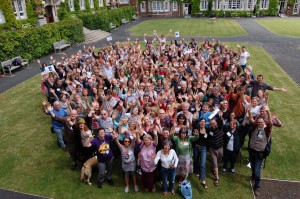 The transition groups has spread across the UK with towns in nearly every county (Source: Edmittance/Flickr)

That’s not to say the model is perfect. The Transition Movement has come in for its fair share of criticism.

It has been accused of being too white and middle class, of being to eco-hippy, of not been activist enough or political enough, and for being unrealistic in its aims.

And even the film itself shows where it has not worked and where groups, have broken down, from lack of involvement, or because disagreements and arguments got in the way of what the group was attempting to do.

That’s what happened to Transition Lancaster in the north-west of England. A sweet dream left a sour taste with many of those who were the founders of the group.

But, in true transition style, the new group has learnt from the past mistakes, and has been thriving the the town now since 2010.

Transition is not easy

It will go through peaks and troughs and the projects which show the most success are those which have managed to get the whole town, city or village behind it.

And that is a pretty inspiring story to tell.