A leading business lobby group in the UK has called on the government to pursue the potential of the green economy. 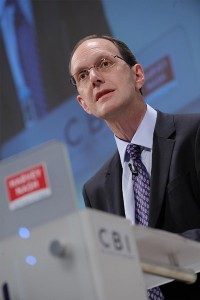 John Cridland, director-general of the CBI said that there was no conflict between going for growth or going green and that this was being misrepresented as a “false choice”.

“The choice between going green and going for growth is a false choice. Green and growth do go together, and the statistics back this up. The UK’s low-carbon and environmental goods and services market is worth more than £120bn a year. That’s equivalent to more than eight per cent of GDP,” said Cridland.

Changes to government policy could generate an additional £20bn for the UK according to research by the CBI. The group said that governments should use policy to boost confidence and competiveness while decreasing complexity.

The group also issued ten steps for governments to boost green business – these were very UK-centric so we have distilled the key points for an international audience.

1. Maintain ambition: Clear and binding emissions targets send a signal to business that you are serious about backing the green sector

2. Support regional and international climate negotiations: We all need to move forward together to really ensure success. The CBI want the UK government to play an active role in developing the EU-Emissions Trading Scheme and ensuring the UNFCCC negotiations get back on track.

3. Establish clear market frameworks: Market signals must have stability and longevity. No business will make substantial investments if they think the government will change their mind at the first whiff of criticism.

4. Stimulate new markets: Work with business to get the best mix of incentives and regulation. We can’t force all high-emitting industries to change their ways, but if the incentives (and the penalties) are right they will start to change.

5. Cut Green Tape: We live in an increasingly complex world where measurements can (and are) made to excruciating degrees. Keep the regulations simple and there’s more chance everyone will comply.

6. Reflect and respect the value of all sectors: The UK still depends on a massive amount of coal to maintain electricity production (42% on latest figures). You can’t change this overnight – so work with those industries and provide them with ‘specific decarbonisation maps’ to make the transition less painful.

7. Build on your country’s strengths: Not every nation state will have the same tools. Some have a stronger manufacturing base, others finance or science. Don’t try and do everything – work with others to generate the best blend.

8. Capture more value from the green economy: Longer term planning and technology ‘mapping’ can ensure the green sector grows as an integrated and efficient part of the economy

9. Finance: An ever vital component that governments have great power over. Ensure mechanisms such as the UK’s ‘Green Investment Bank’ can raise money from the capital markets as soon as possible.

10. Skills: All governments need to address skills shortages. Many renewable organisations are desperate for engineers.