What the Higgs Boson tells us about climate change science

Buried under the ground, somewhere in Switzerland, two teams of scientists at the famous CERN lab have been taking turns to smash particles together in search for proof of a concept widely referred to as “cosmic soup”. 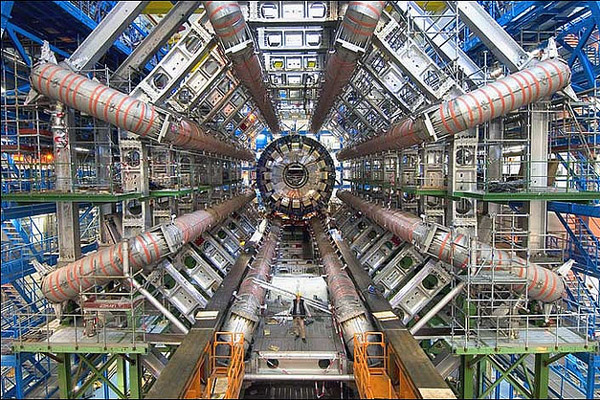 Part way through this process they thought they’d proved that sub atomic neutrinos could move faster than the speed of light.

A few months later they confessed they’d just made a simple error, a mistake in a calculation or a fault with a GPS receiver were suggested. They duly corrected it and went about their business.

Today, that culminated with the announcement that they had almost certainly discovered the much sought after Higgs Boson, an until now theoretical particle that gives matter its mass.

No one is challenging their work, raking over the neutrino incident or questioning their (epic) funding.

The theft of emails from the University of East Anglia failed to produce any real scandal or unearth any errors (according to an independent inquiry, not me). At worst, one of the scientists was found to be taking a short cut with his maths. This was investigated and there was shown to be no wrong doing or misrepresentation with published results.

Meanwhile, despite increasing evidence linking the frequency of extreme weather events to climate change, the constant complaining of the “funny weather” and myriad of statistically solid evidence backed, peer-reviewed scientific research, climate change is something 43% of Brits are unwilling to commit to.

Yet when a team of theoretical physicists produce findings so hugely intangible to the general public and with far less obvious and instant repercussions for our way of life, there is not a single cynic or voice of dissent to be found.

There are still 3% of scientists out there challenging the conventional climate change theories. Their doubts are healthy and also evidence based. Their contribution forces rigour, accuracy and honesty from the other 97%.

Particle physics (as far as I’m aware) is a fairly non-politicised topic. Perhaps it will be once there are bankable applications and money to be made.

For the moment, people are happy to go with what the science tells them.

Climate change on the other hand, and related policies affect people directly. It often means additional effort around the household, perceived guilt-trips from those taking action and in some countries, higher taxes.

In this instance, politics takes over and the science is moot. The trusted, omnipotent physicists at CERN are viewed entirely differently to climate scientists in this scenario, who are written off as corrupt, self-serving cogs in a clockwork conspiracy.

Scientists at CERN stopped (just) short of claiming to have discovered the Higgs Boson, but they have proved beyond doubt, that those questioning climate scientists do so not because they think they’ve done their sums wrong, but because of that other variable that scientists long to avoid – politics.