Would a CCS leak be as damaging as the BP Gulf of Mexico oil disaster?

When we think of the threats to our oceans from the fossil fuel industry, scenes of birds covered in oil as it laps the shores in the Gulf of Mexico spring to mind.

But as we continue to look for new technologies to mitigate the effects of climate change, researchers begin to ask if carbon dioxide leaks could be the new threat to the seas.

As countries around the world continue to rely on Carbon Capture and Storage (CCS) for climate change mitigation plans, scientists have conducted the world’s first experiment into carbon dioxide leaks from underground stores into the ocean.

CCS plays a vital part in the 2050 visions for countries across the world.

The International Energy Agency (IEA) says that the technology will have to contribute one-fifth of the necessary emissions reductions by the middle of the century to achieve climate stabilisation in a cost-effective manner.

CCS involves capturing CO2 from power plants and industrial actions before it is emitted into the atmosphere, and then pumping it into deep sub-seabed reservoirs and geological structures for permanent storing.

The major location of stored CO2 in the UK will be in rock underneath the North Sea. Current estimates for geological storage underUKwater are equivalent to 100 years of CO2 emissions based on current generation.

The risks of such leakage are low. Sites will be specifically chosen to limit the escape of CO2 into surrounding rocks – and will typically be at depths greater than 800m below the surface.

Despite this Plymouth Marine Laboratory who lead the study say it is vitally important to understand the way the CO2 will move in these stores and to assess the risks of these potential mitigation strategies before their use becomes widespread.

The study involved pushing CO2 from a “pop-up” lab through a borehole under the sediment, releasing it 350 meters from the shore, in Ardmucknish Bay near Oban, Scotland.

The aim is to take the results of the staged leak and use them to deduce what might occur in real-life future situations.

It aims to investigate how the CO2 will disperse in the seawater and the response of marine life. It also aims to monitor the time needed for environments to recover.

30 days of released CO2 will now be followed by the further 90 days of monitoring. 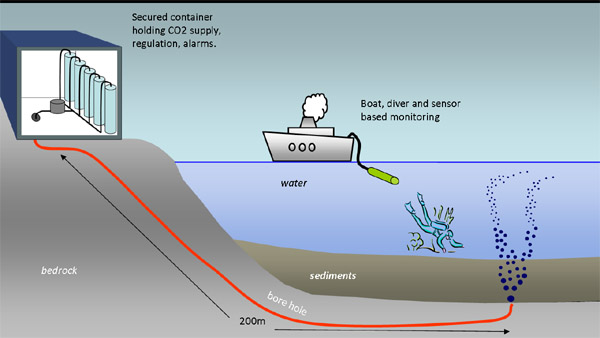 The staged leak took CO2 from "pop-up" labs out into the ocean through boreholes (Source: Plymouth Marine Laboratory)

So far results have been as expected.

“CO2 gas has been bubbling out of the sediments over the last few weeks and we have seen a clear but localised dip of the pH in the sediments and overlying water in the bubble zone, as expected,” said Dr Henrik Stahl from the Scottish Association for Marine Science, also involved in the research.

“This is due to the CO2 reacting with the seawater, which alters the chemistry of the surrounding water and sediments, and therefore, reduces the pH. Some animals, such as sea urchins living in the sediments, seem to react negatively to the increase in CO2 whereas other, such as crabs, seem to be attracted or unaffected by the bubble; so there could be both winners and loser in a real-life situation.”

Similar results are being seen by scientists who study the impact of atmospheric carbon dioxide being absorbed into the oceans.

Predicting real-life implications of a leak 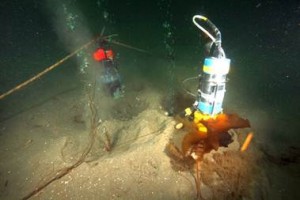 The researchers used different techniques and technologies to monitor to CO2 impacts on the oceans (Source: Plymouth Marine Laboratory)

While the experiment taking place in Scotland will never be able to fully replicate the real world, and the full diversity of marine environments, the researchers hope the study can provide valuable information to help understand the implications of such a leak.

While other such studies have tended to focus on “catastrophic” releases, this study aims to examine the prolonged slow releases – and early research shows this could be just as significant as larger releases.

Researchers say this will help provide a comprehensive risk assessment of CCS, and the timing of the research aims to provide this assessment early into the technology’s development.

As well as testing out the possible impacts of carbon dioxide leaks, it gives researchers a chance to test the best monitoring methods to ensure early detection of leaks in the future.

“We are now at the stage of collecting detailed data which will enable us to get closer to predicting which might happen if a real leak occurred on an active storage site,” explains Jerry Blackford from Plymouth Marine Laboratory. “As well as looking for environmental impacts the experiment has allowed us to test a range of monitoring equipment in a real world setting.”

RTCC will be keep up with the progress of the study and will bring you latest results as they develop.