Rio+20: What next for civil society following Earth Summit ‘failure’?

Seen as a major failure of collective leadership, the Rio+20 Earth Summit produced a document lacking substance and showing no real commitment to put the world on the right path for a sustainable future.

Criticised for acting on behalf of vested interests – and protecting the very machines which are aiding the destruction of the planet – civil society groups around the world found a united voice, denouncing the work of politicians and turning their backs on the hollow promises in which they have lost trust.

But without the global negotiations to put focus upon, who can take up the challenge?

Maybe the answer is simple.

It is now the turn of the individual, and the collective to act. 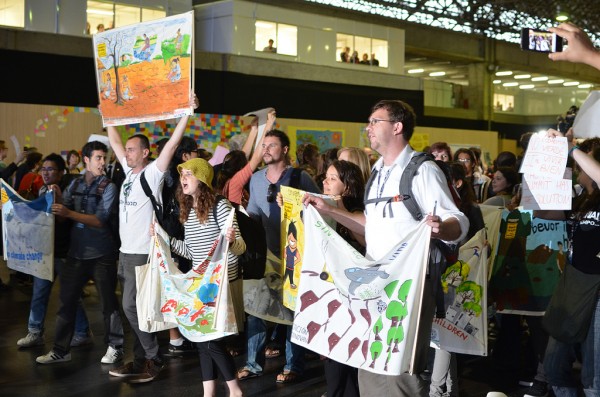 In an article for the New York Times, Frances Beinecke, President of the Natural Resources Defence Council and Trip Van Noppen, President of Earthjustice, laid out their argument.

“Rio+20 is a catalyst. It is a starting point for change, not a finish line. It is a call to action for all of us who now realise that we can’t just rely on governments, negotiators or verbose and hyper-compromised documents to save our planet.

They use the examples of all of the schemes announced throughout the two weeks, from everyone from the private sector to local governments.

They also praised all those who participated in the conference, not only in person but by using technologies such as YouTube and Twitter to attend wherever they were in the world saying “the incredible energy and enthusiasm they demonstrated is only a hint of what individuals can do.”

Take for example, the #endfossilfuelsubsidies Twitter Storm. Targeted specifically to coincide with the second week of the Rio+20 conference, it mobilised millions of people around the globe, clogging the social networking sites and getting the topic trending worldwide on Twitter. 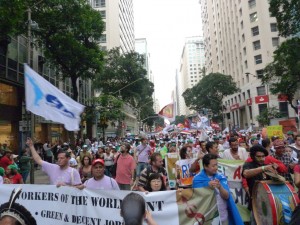 The ITUC also joined in civil action in Rio (© ITUC)

Teamed with a global petition handing into governments and a protest on the beach front in Rio – it was hard for any person to ignore the sheer volume of the collective voice it brought together.

And it is not only online that acts of defiance and protests already show hints of this mobilisation that the civil society groups describe. In the UK over the weekend, following the disappointment of the conference, four activists from the group Climate Siren scaled the gates of Buckingham Palace and secured themselves to the railings.

The banner they carried was taken directly from Prince Charles’ speech from Rio+20 reading “the doomsday clock on climate change is ticking ever faster.”

So whether millions online, or four people in a city, signs of this mobilisation have already begun, and many of the major groups attending the conference warn that countries’ governments will see much more collective action.

Following a meeting with the UN Secretary Ban Ki-moon at the end of the conference, Sharon Burrows, from the International Trade Union Confederation, who had over 700 members at the conference, told journalists: “We told him that with civil society, the trade unions would now mobilise – 175 million members, more than the population of most countries.

Related audio: Listen to what Sharon Burrows from the ITUC and Kumi Naidoom from Greenpeace International had to say at the end of the conference…

Her sentiments were shared by trade union groups across the globe. On both sides of the Atlantic in the US and UK, bloggers set to work sharing these ideas, and echoing Burrows warning, “There are no jobs on a dead planet.”

Writing in the UK, Philip Pearson, from the TUC, argued that “the failure of leadership demonstrated in Rio has simply strengthened the determination for trade unions to go back to our countries…and build the social power that will make the alternative model we are proposing the best possible solution.”

If we once again look at the Rio outcome document but through a different lens, is the document a good starting point for this new civil society action?

The document is filled with words such as “reaffirm”, “encourage”, “take note”, “commit” and “strengthen”. Both Oxfam and Christian Aid pledged in their closing statements to stand with their partners to make sure these words turn into the actions necessary and to push governments and the private sector to take the right pathway.

For example, the commitment by the Rio text to begin the process of a new set of Sustainable Development Goals, gives these groups, and groups around the world to push for these gaols to be all inclusive and to represent the needs and the wants of those people they represent.

Related audio: See what Meenakshi Raman from Third World Network had to say about the next steps for civil society groups…

Speaking to RTCC at the conference Meenakshi Raman, from Third World Network said: “We should not cry over what we did not see. But what this shows is a signal to civil society and social movements [that] we really need to unite and mobilise in all of our countries and I think the document gives us that opportunity.

“All is not lost. You can look at it as glass half full or glass half empty and I see it as half full. I think we can build on it.”