As delegates, negotiators and activists make their way back from Rio, we look at a selection of the reaction to the outcome document and the process itself, from across the globe. 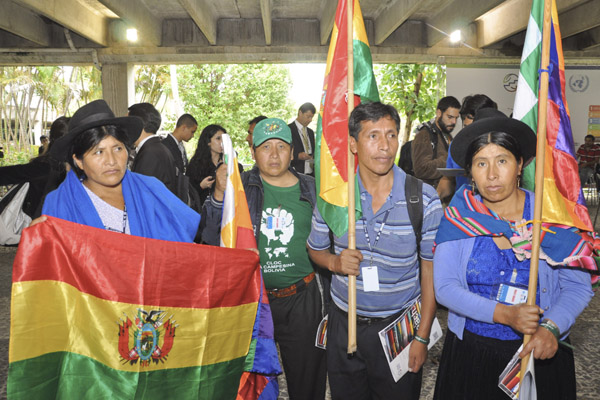 Protests at the conference were wide but diverse, the lukewarm reaction afterwards has been global. (Source: UN Photo/Luiz Roberto Lima)

“The summit has gone the Copenhagen way, with lots of fuss and no concrete outcome. This place was virtually invaded by the representatives of the corporate world — the drivers of today’s unsustainable human consumption.” Soumya Dutta, India People’s Science Forum quoted in The Hindu.

“We’ve sunk so low in our expectations that reaffirming what we did 20 years ago is now considered a success.” Martin Khor, executive director of the South Centre.

“This is an outcome that makes nobody happy. My job was to make everyone equally unhappy.” Sha Zukang, Secretary-General of Rio+20.

“From my last perspective, Rio+20 is a promise, it’s a promise to the islands, it’s a promise to the youth, it’s a promise to all those affected by the doings of mankind. There were a lot of people around the conference today saying that they were disappointed with the outcomes of Rio+20. My opinion is that signatures on a document will not save the world but going out there and actually doing something about it, will.” Brianna Fruean, a 14 year old environment campaigner and member of the Samoan delegation at Rio+20.

“The outcome of the summit is a glass half full half empty and in many respects it is a reflection of the challenges related to the global economic crisis. I came to Rio from the G20 meeting and you can see there that the global crisis means making other agreements extremely difficult. It’s important to understand that this is a process, and it’s a process that’s going on during a global economic crisis.” Donald Kaberuka, President of the African Development Bank.

“Probably those who are most frustrated, and who say they are frustrated, are the Europeans. They think they can still indicate paths which others should follow.” André Corrêa do Lago, Brazil’s chief negotiator at Rio+20 quoted in the New York Times.

“The green economy simply reinforces the current model of development, based on overconsumption and production. The same financial mechanisms that caused multiple crises since 2008 are being promoted, but this time to commodify nature. There is enough evidence on the negative impacts of the financialisation of nature on women’s rights and livelihoods.” Nicole Bidegain of GEO-ICAE, Uruguay.

“In its current form, the text reaffirms and deepens the current neo-liberal economic model. It promotes “inclusive and sustainable” economic growth with various references throughout the text without putting forward proposals or changes to the dominant economic system.” Bolivian Climate Change Platform.