Rio+20: How UK’s DFID will continue on sustainable development pathway

Whether a success or failure, Rio+20 has firmly put sustainable development back on the agenda of governments across the world.

As the UK delegation headed out to Rio last week – led by Deputy Prime Minister Nick Clegg and Environment Secretary Caroline Spelman – they aimed at focusing on several key areas; making the case for the green economy, pushing the concept of GDP+ to measure growth alongside the well-being of society and pushing for the Sustainable Development Goals.

The final document which came out of the conference – while criticised by many for being light on action – did recognise all three of these principles and puts the world at the beginning of a pathway towards these aims.

Now the real work begins, as governments, civil society and the private sector put these words into actions. The UK’s Department for International Development (DFID) and the UK government will play a key role in this transition, with Prime Minister David Cameron co-chairing the high-level panel for a post-Millennium Development Goal framework.

RTCC spoke to Melinda Bohannon, Head of the Climate and Environment Strategy Unit at DFID about how they define sustainable development, what the Sustainable Development Goals (SDGs) should look like and how climate change is impacting the development agenda.

RTCC: This year is the year of Sustainable Energy for All. How vital is ensuring energy access to alleviating poverty?

MB: Dependence on fossil fuels is not sustainable in the long term – either economically or environmentally – so it is vital we address energy access in a way that reduces dependencies on fossil fuels and contributes to energy security objectives and builds local resilience.

Access to modern energy technology, such as electricity and efficient cooking facilities, plays a crucial role in fighting poverty.

Today, using smoky stoves to cook is estimated to cause as many as 1.5 million premature deaths a year. Helping the poorest access modern and efficient energy services can help some of the most vulnerable people in the world, especially girls and women, and improve their health, education, and economic options.

That’s why the Coalition Government works hard to support and build local markets and innovation in the private sector to help millions of the poorest people as part of our commitment to fight poverty through our investment into sustainable energy. 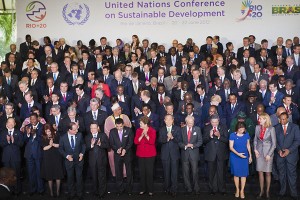 World leaders at Rio have set the world on a pathway towards sustainable development (Source: Flickr/UN_Photo_Conference)

RTCC: Sustainable Development is a word which is being discussed and debated around the world now, with many disagreements over what it actually means, what does this term represent for DFID?

MB: DFID’s goal is the eradication of poverty and from this goal springs our understanding of sustainable development.

We aim to balance different, and often competing, development needs against an awareness of the wider environmental, social and economic situation to ensure that we help the poorest without disadvantaging other groups or damaging the natural environment on which the growth is based.

We want to make sure all our work is socially, environmentally and economically sustainable so we make a real and lasting difference. We want to take wide-angled view of development and not be driven by one particular need without fully considering the wider or future impacts.

The Government is promoting the need to value natural resources correctly to help when making decisions that could have a big impact on the environment, such as setting the right business incentives, involving the private sector, and recognising the importance of open access to information.

RTCC: One of the major talking points at the Rio+20 conference was the idea of a new set of SDGs, and the outcome sets out the pathway to agreeing these goals in the future. How do we ensure these goals address the three pillars of sustainable development?

MB: The Millennium Development Goals (MDGs) have played a critical role in shaping the international development agenda and galvanising action over the last decade. The UK Government is committed to reaching the MDG target by 2015 and has already announced efforts to step-up contributions to core development areas such as health and education.

It is clear that thinking behind the idea of SDGs draws on the experience of the MDGs. The UK thinks that SDGs could be a way to draw more attention to those development issues requiring us to bring together all three dimensions of sustainable development: social, economic and environmental.

That’s why we’re pushing for a short, focused set of SDGs on food, energy and water, and for those SDGs to be developed as part of the broader process to elaborate a post-2015 international development agenda.

RTCC: Could we (and should we) have a set of all-encompassing goals? What lessons can we learn from the MDG process in setting out these new goals?

MB: The UN Secretary General Ban Ki-moon has announced a High Level Panel to consider exactly how to build on the successes of the MDGs and to secure a framework for development going forward.

The UK will play a critical role with the UK Prime Minister, David Cameron, one of the co-chairs alongside the Presidents of Indonesia and Liberia. Certainly we can see that part of the success of the MDGs is their relative simplicity.

This is something that we will want to hold on to in thinking about how best to bring in not only the critical issues of sustainable development being discussed at Rio but also other important issues such as promoting growth and tackling corruption. 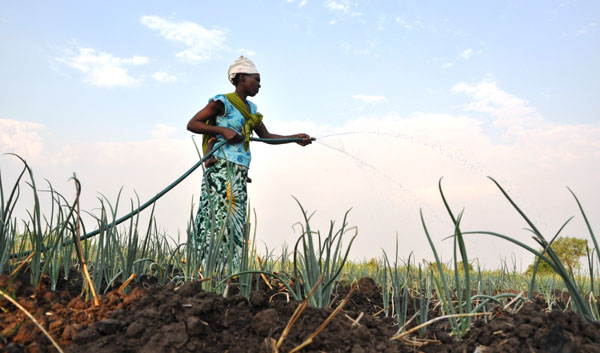 Climate change threatens many vulnerable areas around the world (© DfID)

RTCC: With many of those living in the poorest place increasingly impacted by climate change, how have development priorities changed over the last 20 years because of this?

MB: Climate change is one of the most urgent environmental challenges facing the world today. The UK’s Humanitarian Emergency Response Review predicted that 375 million people will be affected by climate related disasters by 2015 every year and the number is expected to increase over time. As droughts, floods and famines set to increase in frequency and intensity and plunge the poorest deeper into poverty, we have to act now to minimise the impact of climate change on DFID’s work.

RTCC: In a period of increasing difficulties worldwide, how important has it become to find innovative way of raising funds for climate adaptation and development and ensure the funds go to the right places and the right people?

MB: We need to provide a truly comprehensive and integrated response to the challenges of development and climate change, and finding innovative ways to do this is both essential and urgent. There is huge potential for innovative financing mechanisms to grow and help deliver the money needed to help poor countries to adapt to change.

The UK’s International Climate Fund brings in additional funding from the private sector and looks at less traditional means of channelling funds to those most in need.

We also support initiatives, such as the Clean Development Mechanism and the International Finance Facility for Immunisation, which have raised up to US $5.5 billion for the health sector and $31 billion for the environmental sector since 2002.

Most importantly, the UK is committed to making sure the aid we direct to the poorest people to grow and adapt to climate change actually reaches them.

The UK Government has a zero tolerance approach to corruption and we do not tolerate corruption or misuse of taxpayers’ funds in any form. All allegations of fraud are taken very seriously, and we have robust systems to safeguard aid money and make our systems even stronger.