Twenty years ago, everything seemed possible: the Cold War was over, and there was new hope for effective action by the United Nations. In contrast, today the international community is facing a series of violent political crises and a very dim economic outlook. And yet leaders and experts have assembled in Rio in order to address global challenges of a new kind. 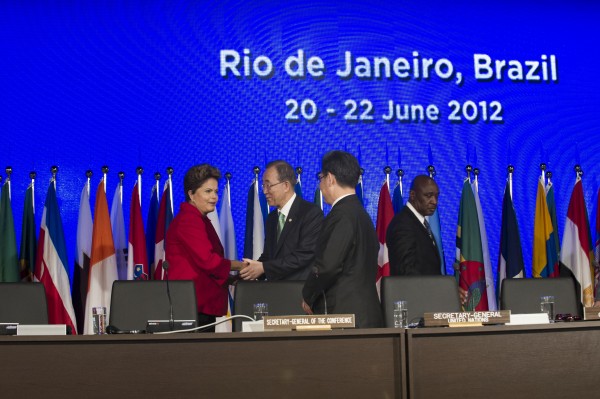 We are now in the Anthropocene, an era in which humans have become masters of the planet in a way we have never experienced before. In the incredibly short time-span of a few hundred years, we have managed to make an impact on immensely large natural systems.

Our generation faces a responsibility towards future generations which forces world leaders to come to bold decisions, and to implement them.

The preparations of the Rio Conference have been laborious and in many respects disappointing. The problem is that political will is not enough.

Even Heads of State need the political capacity to act decisively in their own countries. In a world with many urgent problems, it is not easy to create the necessary conditions for international agreements that could be implemented and lead to action in the real world.

It is in this perspective that all the efforts of civil society, scientists and other major constituencies offer hope. They help create the enabling conditions to gradually change the environment in which political decisions will be taken.

It is easy to be cynical and say that the last 20 years have not changed anything, that carbon emissions are increasing, that biological diversity continues to be lost, that hundreds of millions of people still live under conditions of absolute poverty.

All this is true. But cynicism is not an option: imagine if the Stockholm and Rio principles or Agenda 21 had not existed, if the Rio Conventions, with their innovations in international law, had not entered into force.

The 40 years since the Stockholm Conference have not been in vain: a new global consciousness of our dependence on the natural and environmental resources of the planet has emerged.

Hundreds of millions of decisions are taken every day, at all different levels, based on new knowledge and on new national policies linked to international action resulting from multilateral negotiations.

I know from inside the problems of these negotiations; they are slow, sometimes frustrating and disappointing. The Rio statement is rightly criticized for being too bland and general. But it is an agreed text, containing elements which can be elaborated upon.

Heads of State and Government have added their own comments. And over the years these elements will lead to new opportunities for concrete action.

There are certainly doubts and controversies around the concept of a green economy; but out in the real world, initiatives from Rio will have an impact and change the reality of economic policy that will create jobs and improve living conditions.

Changes in international institutions may seem far removed from real life, but in a globalized world, the effects might be decisive. And notions of Sustainable Development Goals may seem futile in the light of the immensity of the problems – but the Millennium Development Goals have had an effect on our common policies to reduce poverty.

This is a cumulative process: let us hope that in another 20 years, these June days in Rio de Janeiro will be seen as an essential step in facing up to the Anthropocene.

Bo Kjellén is a senior research fellow at the Stockholm Environment Institute and former chief climate negotiator for Sweden.